He was born in Providence, Rhode Island in 1927 and graduated from the University of Rhode Island in 1949. Grant's interest in fantasy and science fiction started when he began reading the stories of Edgar Rice Burroughs at age 10. [1] He married in 1956 and has two children. [1]

Grant was involved in the founding of several science fiction and fantasy small press publishers. He co-founded Grant-Hadley Enterprises in 1945, [2] The Buffalo Book Company in 1946 [3] and Centaur Press in 1970. [4] He also founded Grandon, Publishers in 1949 [5] (this was after his split from Thomas Hadley; the name was that of a lead character in one of Otis Adelbert Kline's fantasy novels) and Donald M. Grant, Publisher, Inc. in 1964. [6]

Jack Laurence Chalker was an American science fiction author. Chalker was also a Baltimore City Schools history teacher in Maryland for 12 years, retiring during 1978 to write full-time. He also was a member of the Washington Science Fiction Association and was involved in the founding of the Baltimore Science Fiction Society.

Donald M. Grant, Publisher, Inc. is a fantasy and science fiction small press publisher in New Hampshire that was founded in 1964. It is notable for publishing fantasy and horror novels with lavish illustrations, most notably Stephen King's The Dark Tower series and the King/Peter Straub novel The Talisman.

Fantasy Press was an American publishing house specialising in fantasy and science fiction titles. Established in 1946 by Lloyd Arthur Eshbach in Reading, Pennsylvania, it was most notable for publishing the works of authors such as Robert A. Heinlein and E. E. Smith. One of its more notable offerings was the Lensman series.

Martin Greenberg was an American book publisher and editor of science fiction anthologies. 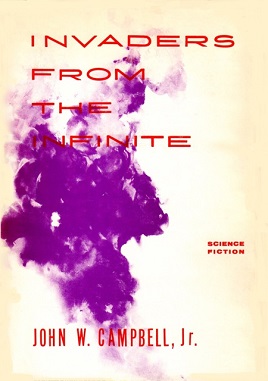 Invaders from the Infinite is a science fiction novel by American writer John W. Campbell Jr.. It was simultaneously published in 1961 by Gnome Press in an edition of 4,000 copies and by Fantasy Press in an edition of 100 copies. The book was originally intended to be published by Fantasy Press, but was handed over to Gnome Press when Fantasy Press folded. Lloyd Eshbach, of Fantasy Press, who was responsible for the printing of both editions, printed the extra copies for his longtime customers. The Fantasy Press edition was issued without a dust-jacket. Eshbach eventually did produce a jacket in 1990 at the urging of George Zebrowski. The novel is an expansion of stories that originally appeared in the magazine Amazing Stories Quarterly.

Of Worlds Beyond is a collection of essays about the techniques of writing science fiction, edited by Lloyd Arthur Eshbach. It was first published in 1947 by Fantasy Press in an edition of 1,262 copies. It has been reprinted by Advent in 1964 and by Dobson in 1965. 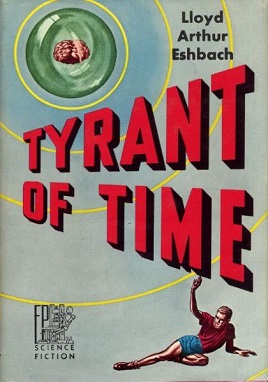 The Tyrant of Time is a collection of science-fiction short stories by the American writer Lloyd Arthur Eshbach. It was first published by Fantasy Press in 1955 in an edition of 1,547 copies. Most of the stories originally appeared in the magazines Wonder Stories, Amazing Stories, Thrilling Wonder Stories, Science Fiction and Strange Stories.

Grant-Hadley Enterprises was the first of three names used by an American small press publishing house specializing in science fiction titles. The company was founded in 1945 by Donald M. Grant and Thomas G. Hadley and published one title as Grant-Hadley Enterprises. Kenneth J. Krueger joined the company in 1946 and the name was changed to The Buffalo Book Company. Later in 1946, Hadley continued the company on his own as The Hadley Publishing Co.

Prime Press, Inc. was a science fiction and fantasy small press specialty publishing house founded in 1947. It published a number of interesting science fiction books in its brief four-year lifespan. 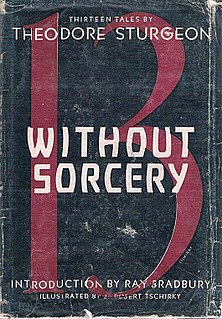 Without Sorcery is a collection of science fiction and fantasy short stories by American writer Theodore Sturgeon. The collection was first published in 1948 by Prime Press in an edition of 2,862 copies of which 80 were specially bound, slipcased and signed by the author and artist. The stories first appeared in the magazines Astounding and Unknown.

Shasta Publishers was a science fiction and fantasy small press specialty publishing house founded in 1947 by Erle Melvin Korshak, T. E. Dikty, and Mark Reinsberg, who were all science fiction fans from the Chicago area. The name of the press was suggested by Reinsberg in remembrance of a summer job that he and Korshak had held at Mount Shasta.

The Checklist of Fantastic Literature is a bibliography of English science fiction, fantasy and weird books compiled and edited by Everett F. Bleiler with a preface by Melvin Korshak and a cover by Hannes Bok.

William Levi Crawford was an American publisher and editor.

Behind the Evidence is a science fiction novel by authors Amelia Reynolds Long and William L. Crawford writing under the pseudonym Peter Reynolds. It was published in 1936 by the Visionary Publishing Company in an edition of 100 copies.

After 12,000 Years is a science fiction novel by American writer Stanton A. Coblentz. It was first published in book form in 1950 by Fantasy Publishing Company, Inc. (FPCI) in an edition of 1,000 copies, of which 750 were hardback. Lloyd Arthur Eshbach regarded this as one of the stronger titles published by FPCI. Considered one of the author's most bizarre and most interesting futuristic fantasies, the novel originally appeared in the Spring 1929 issue of the magazine Amazing Stories Quarterly. The novel was abridged for the FPCI publication. E. F. Bleiler considered the unabridged version to be superior.

Lovecraft's Providence and Adjacent Parts is a book by Henry L. P. Beckwith, Jr. detailing sites in Providence, Rhode Island related to H. P. Lovecraft. It was first published by Donald M. Grant, Publisher, Inc. in 1979 in an edition of 1,000 copies. The book grew out of a bus tour of Providence that Beckwith held as part of the World Fantasy Convention and is still a useful for handbook for those who visit Lovecraft-related sites around Providence.