Don McCallum was born in Edinburgh. His father, Roderick McCallum, was a headmaster who married Lillian McPhee. He attended George Watson's Boys' College. He gained a BSc (1st) in Electrical Engineering from the University of Edinburgh in 1942. [2]

From June 1944 he worked on the short range VHF radio system for Talk Between Ships (TBS). On the day before D-Day, he had worked on HMS Bulolo, which had directed the landings off Gold Beach.

He worked for forty years at Ferranti Scotland in Edinburgh, half of those years as general manager [3] from 1968; the company had 8,000 employees. He joined Ferranti in 1947. The company had established itself in Edinburgh during World War II to make gyroscopic gunsights (gyro gunsights).

Projects he oversaw included the Ferranti Laser Target Marker (LTM or FLTM) and the Seaspray radar, and airborne interception radars.

He retired as general manager in 1985, then as Chairman in 1987; six years later Ferranti went bankrupt. Some people believe that had he still been at the company, that bankruptcy may not have happened.

He received a CBE in the 1976 Birthday Honours and a knighthood in the 1988 New Year Honours. He lived in his later life from 2007 at Egton with Newland near Ulverston in South Lakeland. He died aged 89 in Cumbria. He was buried on Wednesday 26 October 2011 in Edinburgh. He had grandchildren and great-grandchildren.

Donald Cameron Easterbrook Gorrie OBE was a Scottish Liberal Democrat politician. He was a Member of the Scottish Parliament (MSP) for the Central Scotland region from 1999 to 2007. He also sat in the British House of Commons from 1997 to 2001 as the Member of Parliament (MP) for Edinburgh West.

Ferranti or Ferranti International plc was a UK electrical engineering and equipment firm that operated for over a century from 1885 until it went bankrupt in 1993. The company was once a constituent of the FTSE 100 Index. 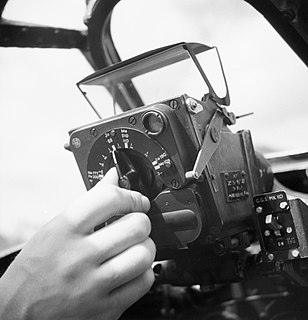 A gyro gunsight (G.G.S.) is a modification of the non-magnifying reflector sight in which target lead and bullet drop are calculated automatically. The first examples were developed in Britain just before the Second World War for use during aerial combat, and more advanced models were common on Allied aircraft by the end of the war.

The Scottish Council for Development and Industry (SCDI), founded in 1931, is a non-governmental, membership organisation which aims to strengthen Scotland's economic competitiveness through influencing government and key stakeholders to create sustainable economic prosperity for Scotland.

Sir Bennett Melvill Jones, was Francis Mond Professor of Aeronautical Engineering at the University of Cambridge from 1919 to 1952. He demonstrated the importance of streamlining in aircraft design. It had been known since the time of Aristotle, that a moving body passing through air or another fluid encounters resistance, but Jones developed the ideas of Louis Charles Breguet into a refined theory to demonstrate emphatically the importance of drag to the performance of aircraft. 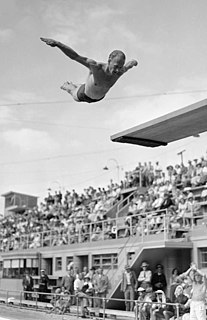 Sir Peter Heatly, was a Scottish diver and Chairman of the Commonwealth Games Federation. He competed in the 3 m springboard and 10 m platform at the 1948 and 1952 Olympics, at the 1950, 1954 and 1958 British Empire Games, and at the 1954 European Championships. He won five British Empire Games medals and one European medal, while his best Olympic result was fifth place in 1948. Heatly was knighted in 1990, before being inducted into the Scottish Sports Hall of Fame in 2002, the Scottish Swimming Hall of Fame in 2010 and the International Swimming Hall of Fame in 2016.

Sir Robert Lang Lickley was a Scottish aeronautical engineer, and Chief Engineer at Fairey Aviation during whose tenure the Fairey Delta 2 became the first aircraft to exceed 1,000 mph.

David James Gow CBE is the inventor of the i-Limb prosthetic hand. He was made an honorary Doctor of Science in November 2018 by the University of Edinburgh.

Events from the year 1943 in Scotland.

Sir John Norman Toothill CBE was an English electrical engineer who rose to be Managing Director of Ferranti.

Charles Frewen Jenkin, CBE, FRS was a British engineer and academic. He held the first chair of engineering at the University of Oxford as Professor of Engineering Science.

The 1928 New Year Honours were appointments by King George V to various orders and honours to reward and highlight good works by citizens of the United Kingdom and British Empire. They were announced on 30 December 1927.

The 1920 Birthday Honours were appointments by King George V to various orders and honours to reward and highlight good works by citizens of the British Empire. The appointments were made to celebrate the official birthday of The King, and were published in The London Gazette on 4 June 1920.

Captain Guybon Chesney Castell Damant was a British royal navy officer known for his scientific research on preventing decompression illness with John Scott Haldane, his leadership over a team of divers that salvaged 44 tons of gold bullion from the wreck of HMS Laurentic between 1917 and 1924, and the covert work he and his divers performed by entering into sunken U-boats during World War I and recovering code books, ciphers, and other materials for the Naval Intelligence Division of the Royal Navy.

Dr Leslie Bennet Craigie Cunningham FRSE OBE was a 20th-century Scottish statistician and physicist known for his expertise on air armaments. In 1936 he invented the gyro gunsight (GGS) which compensates for the movement of target aircraft, predicting their position dependent upon their speed. This created an effective increase in successful targeting from 100 to 400%