DF or df may refer to:

Dongfeng Motor Company Limited is an automobile manufacturing company headquartered in Wuhan, China. It is a 50–50 joint-venture between Dongfeng Motor Group and Nissan Motors. It produces passenger cars under the Nissan marque and commercial vehicles under the Dongfeng marque.

Dongfeng Honda Automobile Co., Ltd. is an automobile manufacturing company headquartered in Wuhan, China, and a 50:50 joint-venture between Dongfeng Motor Group and Honda Motor Company. It currently produces a variety of Honda models also available in other markets and a handful of China-only products. The company sells vehicles under the Honda and Ciimo marques.

Honda Automobile (China) Co., Ltd. known also as CHAC and Honda China is a automobile manufacturer owned by Honda and Chinese companies GAC Group and Dongfeng Motor Group. It is aimed for export worldwide only, not for domestic market in China.

Dongfeng Liuzhou Motor Co., Ltd. is a subsidiary of Dongfeng Motor Group, located in the city of Liuzhou, Guangxi, China.

Dongfeng Peugeot-Citroën Automobile Co., Ltd. (DPCA) is a joint venture between Dongfeng Motor Group and PSA Peugeot Citroën. Based in Wuhan, capital of Hubei province, it manufactures Peugeot and Citroën models for sale in China.

Dongfeng Motor Group Co., Ltd. known also as DFG is a Chinese holding company based in Wuhan, Hubei Province. Its H shares were listed on the Hong Kong stock exchange. 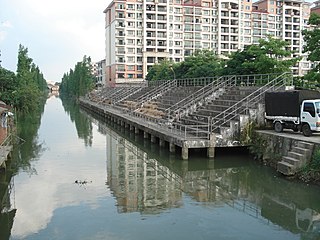 Dongfeng is a town in the north of Zhongshan, Guangdong, China.

Dongfeng Motor Corporation is a Chinese state-owned automobile manufacturer headquartered in Wuhan, China. Traditionally one of the "Big Three" Chinese automakers, Dongfeng is currently in the top four in terms of output along with Changan Automobile, FAW Group, and SAIC Motor.

Aeolus is an automobile marque owned by the Chinese automaker Dongfeng Passenger Vehicle Company, a division of Dongfeng Motor Group. The brand was launched in July 2009 using the Fengshen name, and was later renamed to Aeolus as the English name, while the Chinese name remained the same.

Dongfeng Yulon Motor Co., Ltd. is an automobile manufacturing company headquartered in Hangzhou, China and a 50:50 joint venture between the mainland Chinese automaker Dongfeng Motor Corporation and the Taiwanese automaker Yulon Motor. Its principal activity is the production, distribution and sale of Luxgen passenger cars in mainland China. 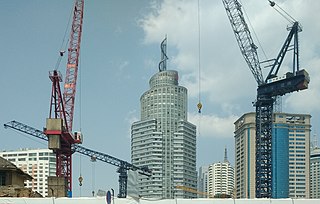 Eye of Spring Trade Center, also known as Dongfeng Plaza, is a complex of two skyscrapers under construction in Kunming, China. The towers will be 100 storeys at 407 metres (1,335.3 ft) and 72 storeys at 326 metres (1,069.6 ft) tall. And once completed will be the tallest in Kunming and the Yunnan province. 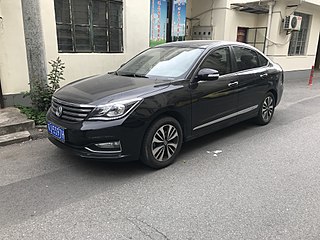