Doni Monardo (born 10 May 1963 in Cimahi) is a retired Indonesian Army lieutenant general who previously served as the Head of Indonesian National Board for Disaster Management (BNPB). [1] He also serves as Chief of the Coronavirus Disease Response Acceleration Task Force during the COVID-19 pandemic in Indonesia. [2] Monardo supported the government's decision to refrain from a country-wide lockdown, arguing doing so would overwhelm the government. [3]

Monardo was born in Cimahi, though both his parents were from the Minangkabau ethnic group. [4] His father, Nasrul Saad, was a lieutenant colonel for Indonesia’s Army Military Police Corps. His mother, Roeslina, was a housewife. Monardo spent the majority of his childhood in Meulaboh and later on Lhokseumawe where his father was assigned. Nevertheless, he returned to Padang in 1975 to attend a public high school. After graduation, he continued his father’s footsteps by enrolling at Indonesian Military Academy and received his diploma in 1985. He continued his studies at Indonesian Army Command and General Staff College, which he graduated from in 1999. He went on to pursue further education in the Indonesian National Resilience Institute that he completed in 2012. [5] [6]

In 1985, Monardo started his career as a member of Kopassus immediately after graduating from the military academy. He spent 12 years as part of the special forces group and was involved in the Aceh and East Timor conflicts. In 1999, he was assigned as a Raider Battalion, serving in Bali.

In 2015, during Joko Widodo’s administration, Monardo was named as the commander-general of Kopassus. He continued serving in military units until 2018. By later that year, he was named the secretary-general of the National Defense Council. In 2019, he was chosen to lead the Indonesian National Board for Disaster Management. [5] 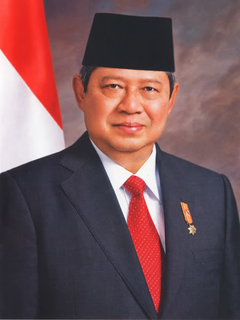 Susilo Bambang Yudhoyono, commonly referred to by his initials SBY, is an Indonesian politician and retired Army general who served as the sixth president of Indonesia from 2004 to 2014. He is a member of the Democratic Party and President of the Assembly and Chair of the Council of the Global Green Growth Institute. Yudhoyono was also the former Chairman of ASEAN due to Indonesia hosting the 18th and 19th ASEAN Summits.

Sudharmono was an Indonesian politician and military officer. He served as its fifth vice president between March 1988 and March 1993. 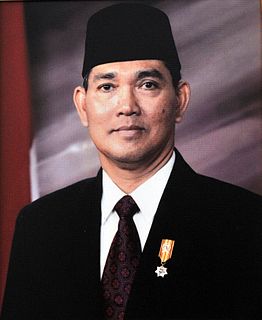 Try Sutrisno is an Indonesian politician and retired army general who served as the country's sixth vice president. He held the office from 11 March 1993 to 11 March 1998. Previously, he served as the Commander of the Republic of Indonesia Armed Forces for five years.

Umar Wirahadikusumah was an Indonesian politician and retired army general who served as the country's fourth vice president, serving from 1983 to 1988. 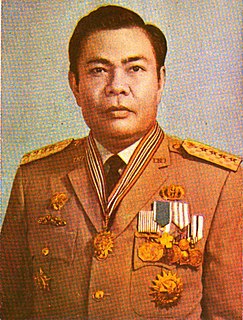 Endriartono Sutarto is a retired army general. He was the commander of the Indonesian National Armed Forces between 2002-2006. 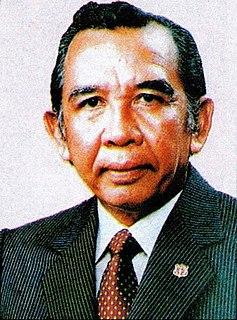 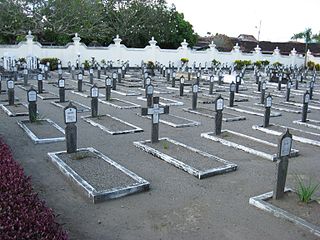 Kusumanegara Heroes' Cemetery is a cemetery located in Yogyakarta, Indonesia. It is home to five National Heroes of Indonesia.

Moeldoko is an Indonesian government official, businessman, and retired general serving as the current Chief of Staff of Presidency for President Joko Widodo, previously serving as Commander of the Indonesian National Armed Forces. He graduated from the Indonesian Military Academy (AKABRI) in 1981 and received the prestigious Adhi Makayasa medal as valedictorian of his class. On August 27, 2013, he was appointed Commander of the National Armed Forces by President Susilo Bambang Yudhoyono and approved by the People's Representative Council after serving as the Chief of Staff of the Army for only three months. He succeeded Admiral (Ret.) Agus Suhartono who retired in May 2013.

Ade Supandi is a retired admiral in the Indonesian Navy who formerly served as its chief of staff. Previously, he had been the General Chief of Staff of the Indonesian National Armed Forces and the commander of the navy's eastern fleet.

Admiral (Ret.) Tedjo Edhy Purdijatno(born September 20, 1952, in Magelang, Indonesia) is an Indonesian politician and retired Naval officer. He was the Coordinating Minister for Political, Legal and Security Affairs of the Republic of Indonesia from October 27, 2014, to August 12, 2015. Tedjo was also the Chief of Staff of the Navy from 2008 to 2009.

Sudrajat is an Indonesian politician, former general and diplomat. He held the rank of Major General in the Indonesian Army, and was the Ambassador of Indonesia to China between 2005 and 2009. Currently, he is the CEO of Susi Air.

Soedjiman was an Indonesian Javanese military officer and politician who served as the Governor of West Kalimantan from 1977 until 1988.

Sayidiman Suryohadiprojo was an Indonesian military officer and diplomat who served as Deputy Chief of Staff of the Indonesian Army from 1973 until 1974, Ambassador of Indonesia to Japan from 1979 until 1983, and Ambassador-at-large of Indonesia to Africa from 1992 until 1995.

Fransiskus Xaverius Sudjasmin was an Indonesian military officer. He served as the deputy chief of staff of the Indonesian Army from 1995 until 1997.

Achmad Tanribali Salim Lamo is an Indonesian military officer and bureaucrat who became the Director General of National Unity and Politics in the Ministry of Home Affairs. Tanribali also held several acting governorships during his tenure in the ministry. 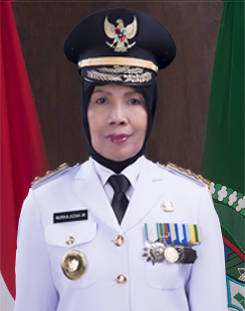 Nurhajizah Marpaung is an Indonesian retired military officer and politician who became the Vice Governor of North Sumatra from 2017 until 2018. Her last position in the military was as the Head of the Legal Bureau of the Ministry of Defense. She unsuccessfully ran for Regent of Asahan in 2015 and 2020.