Last updated September 20, 2022
India's public service broadcaster
Not to be confused with Doordarshan (film) or DoorDash.

Doordarshan (abbreviated as DD; Hindi: Dūrdarśan, lit. 'distant vision, television') is an Indian public service broadcaster founded by the Government of India, owned by the Ministry of Information and Broadcasting and one of Prasar Bharati's two divisions. [1] One of India's largest broadcasting organisations in studio and transmitter infrastructure, it was established on 15 September 1959. [2] Doordarshan, which also broadcasts on digital terrestrial transmitters, provides television, radio, online and mobile service throughout metropolitan and regional India and overseas.

The channel began modestly as an experimental broadcaster in Delhi on 15 September 1959, with a small transmitter and a makeshift studio. Regular daily transmission started in 1965 as part of All India Radio, with a five-minute news bulletin read by Pratima Puri. Salma Sultan joined Doordarshan in 1967, and became a news anchor.

Television service was separated from radio on 1 April 1976. [4] The All India Radio and Doordarshan were placed under the management of separate directors-general in New Delhi. In 1982, Doordarshan became a national broadcaster. [5]

National telecasts (DD National) was introduced in 1982. Colour television began in India with the live telecast of the Independence Day speech by Prime Minister Indira Gandhi on 15 August of that year, followed by the colour telecast of the 1982 Asian Games in Delhi. [6] [7] Two years later, Doordarshan as a TV network finally took shape: the then sole TV channel was split into the nationally aired DD-1 and city channel DD-2, later rebranded in 1993 as DD National and DD Metro.

Live telecasts of the opening and closing ceremonies of the 2012 Summer Olympics were broadcast on its national channel, and DD Sports provided round-the-clock coverage. [8]

On 17 November 2014, Doordarshan director-general Vijayalaxmi Chhabra introduced a pink-and-purple colour scheme and a new slogan: Desh Ka Apna Channel ("The country's own channel"). [9] Doordarshan transmitted over a network of nearly 1,400 terrestrial transmitters in 2017, with 46 studios producing TV programmes. [10] After the introduction of private channels Doordarshan is struggling to keep its position in the television space. [11] Currently Doordarshan is trying to improve its studios and programmes while its primary aim is to serve the country. [12]

Doordarshan operates 46 studios and 21 television channels: two all-India channels (DD National and DD News), [13] 17 regional satellite channels, 11 state networks, an international channel (DD India), a sports channel (DD Sports), DD Bharati, DD Retro, DD Urdu and an agricultural channel, DD Kisan. On DD National (formerly DD-1), regional and local programs are carried on a time-sharing basis for terrestrial broadcasting only. DD News, launched on 3 November 2003 replacing DD Metro (formerly known as the DD-2 entertainment channel), provides 24-hour news. These channels are relayed by all terrestrial transmitters in India. The regional-language satellite channels have two components: a regional service for a particular state (relayed by all terrestrial transmitters in the state), and additional programs in the regional language available through cable operators and DTH operators. DD Sports broadcasts sporting events of national and international importance. It is the only sports channel which telecasts rural sports such as kho-kho and kabbadi.

The DD India satellite channel has been broadcast in 146 countries. In United Kingdom, it was available through the Eurobird satellite on the Sky system's channel 833; its logo was Rayat TV. Transmission via Sky Digital ended in June 2008, and via DirecTV in the United States the following month.

Ramayan on DD National created a world record by becoming highest viewed entertainment programme globally. The 9 PM show on 16 April 2020 was watched by a mammoth 7.7 crore (77 million) viewers. [23] The show managed to reach more than 28.5 crore (285 million) viewers through the length of the broadcast. As a broadcasting response to nation-wide lockdown, apart from Ramayan, many other nostalgia shows were broadcast on DD network. These included Mahabharat, Chanakya, Shri Krishna, Byomkesh Bakshi and Shaktimaan. In light of increasing public demand for such retro content, Prasar Bharati launched ‘DD Retro’ as a full-time channel dedicated for the same. The channel started garnering viewership of almost 5 crore (50 million) within five weeks of its launch. Delivering on its mandate of public messaging, DD network, through COVID-focused awareness messages and shows, reached more than 40 crore (400 million) viewers during first wave of the pandemic in 2020.

Prasar Bharati is Doordarshan's parent body, and its board members are appointed by the Government of India through the Information and Broadcasting Ministry. [24] Doordarshan has been used, especially during the Emergency, to disseminate government propaganda. [25] During Operation Blue Star in 1984, only government sources were used to report the story. Doordarshan was complicit in the production of a video claiming acts of violence which, when investigated by independent journalists, were found to be false.[ citation needed ]

In 2004, it censored a controversial documentary on Jayaprakash Narayan, an opposition leader during the Emergency. [26]

In 2014, When Doordarshan broadcast a 70-minute Vijayadashami speech by Rashtriya Swayamsevak Sangh (RSS) leader Mohan Bhagwat, the Narendra Modi administration and the BJP were criticised for "misusing" the public broadcaster. According to DD director-general Archana Datta, the "speech was like any other news event; therefore, we covered it." [27] [28] [29]

Since private television channels were authorised in 1991, Doordarshan has experienced a steep decline in viewership. Although it earns significant advertising revenue—due to its compulsory feed—from the highest bidder for national events (including cricket matches), [30] there has been a proposal to fund it by imposing a licence fee to own a television in India. [31]

Prasar Bharati is India's public broadcaster, headquartered in New Delhi. It is a statutory autonomous body set up by an Act of Parliament and comprises the Doordarshan Television Network and All India Radio, which were earlier media units of the Ministry of Information and Broadcasting. The Parliament of India passed the Prasar Bharati Act to grant this autonomy in 1990, but it was not enacted until 15 September 1997.

DD-Girnar previously known as DD-10 GUJARATI is the Gujarati language channel of India's national broadcaster, Doordarshan. It is broadcast out of studios at Doordarshan Kendra (Center) in Ahmedabad in Gujarat State. 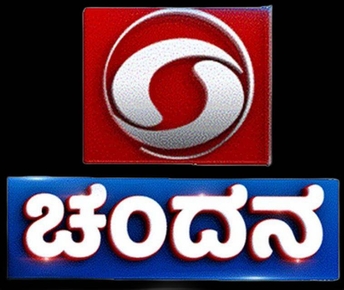 DD Chandana is a Kannada TV channel owned and operated by Prasar Bharati under Doordarshan, supported by Doordarshan studios in Bengaluru and Kalburgi. Launched in 1994 DD Chandana has entertainment serials, infotainment programmes, news and current affairs, social programmes and film programmes as its major content. In terrestrial mode, DD Chandana is available to 81.7% of the population of Karnataka. DD Sahyadri is a Marathi TV channel. It is a regional channel dedicated to Maharashtra. It shows Marathi serials, news, films infotainment and educational programs about agriculture, healthcare, and other subjects. It is part of Doordarshan network. It is a Free-to-air channel.

DD Metro also known as DD 2 was an Indian free-to-air television channel. It was launched in 1984 as DD2 in Delhi as an alternative to DD National. Later, it increased its coverage area by expanding to Mumbai, Kolkata and Chennai. In 1993, the channel was rebranded as DD-2 Metro. On 3 November 2003, the Prasar Bharati Corporation replaced DD Metro with their new news channel, DD News.

DD India is an India-based international state-owned English news and current affairs channel. The service is also aimed at the overseas market, similar to BBC World News, DW, VOA, NHK World, Arirang, Channel News Asia, Russia Today and broadcast through satellite and cable operators throughout the world as well as online and through its mobile apps. It became a full-fledged English news and current affairs channel in January 2019 followed by a decision of the parent Prasar Bharati's board. The total budget provided by the government to this channel is ₹2,640 crore (US$330 million).

DD Punjabi is a state-owned Punjabi language TV channel, started in 1998, which is produced and telecasted from Doordarshan Kendra Jalandhar in Indian Punjab.

DD News is an Indian news channel of Doordarshan, it is India's only 24-hour terrestrial TV news channel broadcasting solely in Hindi, and formerly in English. The Prasar Bharati Board approved the proposal to start a 24-hour news channel in place of DD Metro, which was closing. This was subsequently approved by the Union Cabinet in a meeting held on 3 October 2003.

DD Haryana, is a state-owned TV channel, and only government-owned television production center in Haryana, telecasting from the Hisar Doordarshan Kendra in sector-13 of Hisar of Haryana state in India.

Doordarshan Kendra, Jalandhar also referred as Jalandhar Doordarshan is an Indian television station in Jalandhar, owned and operated by state-owned Doordarshan, the television network of Prasar Bharati. It was established in 1979, and now produces and broadcasts the 24-hour Punjabi language TV channel, DD Punjabi, which was launched in 1998 and covers most of the state of Punjab, India.

Doordarshan Kendra, Mumbai also referred as Mumbai Doordarshan is an Indian television station in Mumbai, owned and operated by state-owned Doordarshan, the television network of Prasar Bharati. It was established in 1972, and now produces and broadcasts the 24-hour Marathi language TV channel, DD Sahyadri, which was launched in 1994 and covers most of the state of [Maharashtra, India].

DD Yadagiri is a state-owned Telugu language television channel operated by India's national broadcaster Doordarshan. It is one of the 11 Indian language channels operated by Doordarshan and is telecast from Doordarshan Kendra, Hyderabad and caters the state of Telangana. The channel is named for Lord Narasimha of Yadagirigutta in the state.

DD Assam is a state-owned Indian TV channel. It telecasts from Doordarshan Kendra Assam, situated at Guwahati. DD Assam is available on DD Free dish DTH, at channel 52. Assam Doordarshan can reach almost 83% of the population and almost 79% the area.

DD Gyan Darshan 1 is a state owned television channel telecasting from Doordarshan, Kendra, IGNOU. It is an educational media initiative of MHRD in collaboration with the Ministry of Information and Broadcasting (MIB), Prasar Bharati and ISRO with IGNOU as the nodal agency.

DD Meghalaya is a regional TV Public Service Broadcaster which is available on Terrestrial as well as satellite mode.

DD Nagaland is an English TV channel owned and operated by Prasar Bharati under Doordarshan, supported by Doordarshan studios in Kohima and Dimapur. Launched in 1992 DD Nagaland has entertainment serials, infotainment programmes, news and current affairs, social programmes and film programmes as its major content. In terrestrial mode, DD Nagaland is available to 96.7% of the population of Nagaland.

DD Retro is an Indian Hindi-language TV channel. It was launched by Prasar Bharati on 13 April 2020. It is a free-to-air general entertainment channel on which old classic shows of Doordarshan are telecasted,

Wikimedia Commons has media related to Doordarshan .
This page is based on this Wikipedia article
Text is available under the CC BY-SA 4.0 license; additional terms may apply.
Images, videos and audio are available under their respective licenses.