Doris Mable Cochran (May 18, 1898 – May 22, 1968) was an American herpetologist [1] and custodian of the American Natural Collection at the Smithsonian Institution in Washington, D.C., for many years. [1]

Born in North Girard, Pennsylvania, she grew up in Washington, D.C., after her father transferred there for a government job. [2]

While an undergraduate student at George Washington University (A.B. 1920, M.S. 1921), she worked for the War Department and became Aide in the Division of Herpetology at the United States National Museum. Although the museum was under the curatorship of Leonhard Stejneger, Cochran was responsible for the administration of the herpetological collections. In 1927 she became Assistant Curator, and in 1942, Associate Curator just prior to Stejneger's death. [2] [3]

After completing studies at Corcoran Art School and developing her talents as an artist, Cochran became a scientific illustrator not only for her own works, but for those of her colleagues. [2]

Cochran's research was focused primarily on the herpetofauna of the West Indies and South America, particularly Haiti. [2] She published 90 taxonomic papers between 1922 and her death (four days after her retirement in 1968) in which she described eight new genera and 125 species and subspecies as well as wartime booklets for the military identifying venomous reptiles. [4] [5] Her 20 years of studies of the West Indies culminated in The Herpetology of Hispaniola in 1941. She visited Haiti twice, in 1935 and 1962–1963. In Haiti she would work with Adolfo Lutz and his daughter, Bertha. [2]

Her most popular book was Living Amphibians of the World, published in 1961. When she visited Brazil, Cochran received a donation of 3,000 Brazilian frogs from Adolfo Lutz, and wrote about South American frogs in Frogs of Southeastern Brazil in 1954 and Frogs of Colombia in 1970 (posthumously). [6] [7]

Cochran was the second person to be elected a distinguished fellow of the American Society of Ichthyologists and Herpetologists in 1962 and had served as its first secretary. [8] [9] At least six reptiles have been named after Doris Cochran of which four are still considered valid: Aristelliger cochranae GRANT 1931, Gelanesaurus cochranae (BURT & BURT 1931), Sphaerodactylus cochranae RUIBAL 1946, Gongylosoma baliodeirus cochranae (TAYLOR 1962). [10] [11] 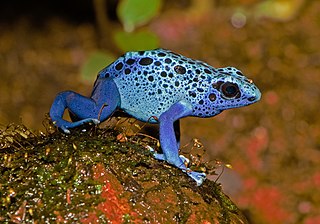 Herpetology is the branch of zoology concerned with the study of amphibians and reptiles. Birds, which are cladistically included within Reptilia, are traditionally excluded here; the scientific study of birds is the subject of ornithology.

Cochran's croaking gecko, also commonly known as Cochran's Caribbean gecko and the Navassa gecko, is a species of lizard in the family Sphaerodactylidae. The species was described in 1931 by Chapman Grant and named after notable American herpetologist and artist Doris Mable Cochran. The species received one of its common names from the loud croaking call of the male during the mating period.

The American Society of Ichthyologists and Herpetologists (ASIH) is an international learned society devoted to the scientific studies of ichthyology and herpetology. The primary emphases of the society are to increase knowledge about these organisms, to communicate that knowledge through publications, conferences, and other methods, and to encourage and support young scientists who will make future advances in these fields. The programs of the American Society of Ichthyologists and Herpetologists are part of a global effort to interpret, understand, and conserve the Earth's natural diversity and to contribute to the wise use of natural resources for the long-term benefit of humankind.

Helen Beulah Thompson Gaige was an American herpetologist, curator of Reptiles and Amphibians for the Museum of Zoology at the University of Michigan, and a specialist in neotropical frogs.

Frank Nelson Blanchard was an American herpetologist, and professor of zoology at the University of Michigan from which institution he received his Ph.D. He is credited with describing several new subspecies, including the broad-banded water snake, Nerodia fasciata confluens, and the Florida king snake, Lampropeltis getula floridana. As well, he has been honored by having reptiles and amphibians named after him, including the western smooth green snake, ecies | Opheodrys vernalis blanchardi, and Blanchard's cricket frog, Acris crepitans blanchardi. 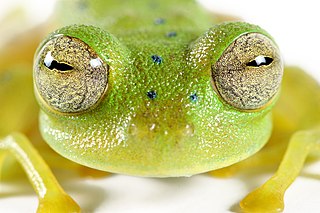 Nymphargus cochranae is a species of frog in the family Centrolenidae. It is found in the lower Amazonian slopes of the Cordillera Occidental of Ecuador and adjacent Colombia, though the Colombian records require confirmation.

Kassina cochranae, sometimes known as the Cochran's running frog, is a species of frog in the family Hyperoliidae. It is found in southern Guinea, Liberia, Sierra Leone, western Ivory Coast, and at least tentatively, southern Ghana. Kassina arboricola was for a period treated as a subspecies Kassina cochranae arboricola, but it is now considered a valid species.

Herpetological society is a commonly used term for a club or organized group of reptile and amphibian enthusiasts. The term is derived from herpetology - the branch of zoology dealing with the study of those organisms.

James Arthur Peters was an American herpetologists and zoogeographer.

Martha L. "Marty" Crump is a behavioral ecologist in the Department of Biology and the Ecology Center at Utah State University who studies amphibians and reptiles. Crump was the first individual to perform a long-term ecological study on a community of tropical amphibians, and did pioneering work in the classification of variability in amphibian egg size as a function of habitat predictability. She has co-authoried one of the most popular modern herpetology textbooks, Herpetology (1997-2015) as well as the memoir In Search of the Golden Frog (2000) and a number of other books for both adults and children. In 1997, she received the Distinguished Herpetologist Award from The Herpetologists’ League.

Richard Bruce Bury, a pioneer in the study of herpetofauna, is an American conservationist, herpetologist, and natural historian and Scientist Emeritus of the United States Geological Survey. Bury, C. Kenneth Dodd, Jr. and Gary Fellers were the first to suggest widespread amphibian declines were progressing. In 1972, Bury became the first person hired by the United States Department of the Interior under the specific title of Herpetologist. In 2009, the American Society of Ichthyologists and Herpetologists (ASIH) made Bury the 11th herpetologist awarded the annual Henry S. Fitch Award for Excellence in Herpetology. Bury is a founding governing board member and executive editor of the journal Herpetological Conservation and Biology. For more than 30 years, Bury has studied herpetofauna ecology and conservation, including the effects of invasive species and wildfire on populations. Thanks in part to his efforts, herpetofauna are recognized as important indicators of ecosystem health.

C. Kenneth Dodd Jr., is an American herpetologist and conservationist. He earned his Ph.D. under Edmund D. Brodie Jr. from Clemson University in 1974. From 1976 to 1984 he worked in the research division of the U.S. Fish and Wildlife Service, then he transferred to the U.S. Geological Survey in 1984, where he remained until his retirement in 2007. He is currently Courtesy Associate Professor in the Department of Wildlife Ecology and Conservation, University of Florida and an Affiliate of the Florida Museum of Natural History. He has published over 200 papers, reviews and books. Much of his research focuses on turtle and amphibian ecology/conservation. He, along with R. Bruce Bury and Garry Fellers were the first to suggest widespread amphibian declines were progressing. He is a nationally recognized herpetologist.

Mary Cynthia Dickerson (1866–1923) was an American herpetologist and the first curator of herpetology at the American Museum of Natural History, as well as the first curator in the now defunct department of Woods and Forestry. For ten years she was the editor of The American Museum Journal, which was renamed Natural History during her editorship. She published two books: Moths and Butterflies (1901) and The Frog Book (1906) as well as numerous popular and scientific articles. She described over 20 species of reptiles and is commemorated in the scientific names of four lizards.

Anolis poncensis is a species of lizard of the family of Dactyloidae. The species is endemic to Puerto Rico. It was first identified in Ponce, in the hills three miles east of the city. The Puerto Rico Department of Natural and Environmental Resources considers it a "vulnerable species".

Tracy Jo Barker is an American herpetologist specializing in pythons.

Cochran's least gecko is a species of lizard in the family Sphaerodactylidae. The species is endemic to the Dominican Republic.

Margaret "Meg" McBride Stewart was an American herpetologist, known for her research on the amphibians of Malawi, the Caribbean, and the United States. She was a professor at the State University of New York at Albany. She served as president of the American Society of Ichthyologists and Herpetologists and the Society for the Study of Amphibians and Reptiles. The puddle frog Phrynobatrachus stewartae was named in her honour.

Wikimedia Commons has media related to Doris Mable Cochran .
This page is based on this Wikipedia article
Text is available under the CC BY-SA 4.0 license; additional terms may apply.
Images, videos and audio are available under their respective licenses.