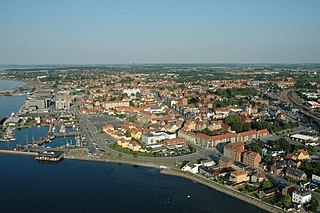 Holbæk is a town in Denmark and the seat of Holbæk municipality with a population of 26,961. It is in the northeastern part of Region Sjælland, Denmark.

The house was built by Christian Ditlev Lunn. In 1774, the 37 years old Lunn married the 13 years younger Dorthea Cathrine Knudsen. The following year he acquired Knabstrup Manor at Holbæk. He constructed Dorothealyst as a widow seat for his wife. [1] The house was built in 1799-1802 to design by Philip Lange, a son of the more famous architect Philip de Lange. [2] The property never came to serve its intended purpose since Lunn in spite of the age difference outlived his wife. Lunn instead lived in the house himself after passing Knabstrup on to his their son Villars. [3]

Knabstrup Manor is a manor house located near Holbæk on the Danish island of Zealand. It traces its history to before 1288.

The estate is owned by the artist Marianne Seidenfaden and her family. [4]

Hellebæk is a town located on the coast five kilometres northwest of Helsingør, North Zealand, some 40 kilometres north of Copenhagen, Denmark. It has merged with the neighbouring community of Ålsgårde to form an urban agglomeration with a population of 5,492.

The Old Artillery Barracks, also known as Irgens House after an earlier owner, was the first of three barracks to be established in the Christianshavn district of Copenhagen, Denmark. The complex has been converted into apartments and is listed.

Palace Hotel is a residential hotel on the eastern side of City Hall Square in Copenhagen, Denmark. Influenced by the Art Nouveau style, the red brick building was designed by Anton Rosen and completed in 1910.

Allégade is the oldest street in the Frederiksberg district of Copenhagen, Denmark. It runs from Frederiksberg Runddel to Frederiksberg Town Hall Square, along the east side of Frederiksberg Gardens, connecting Pile Allé to Falkoner Allé. The streetscape is, in spite of the central location, characterized by houses that are pulled back from the street with front gardens behind white fences. Several buildings are old country houses from the time when Frederiksberg was a summer destination outside Copenhagen. Along the northernmost part of the street, on its west side, is a narrow garden complex, Digterlunden with a statue of Holger Drachmann.

Johannes Christian Hansen was a Danish sculptor. In addition to his sculpted figures of children and interacting couples, he designed a wide variety of glazes and plates for the Knabstrup Keramiske Industri ceramics factory where he was artistic director. 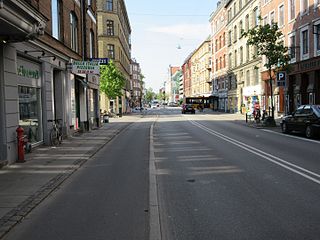 H. C. Ørsteds Vej is a street in the Frederiksberg district of Copenhagen, Denmark. It runs from Åboulevard on the border with Nørrebro in the north to Gammel Kongevej in the south, linking Griffenfeldsgade with Alhambravej and further south Enghavevej-Kingogade with Griffenfeldsgade.

Snaregade and Magstræde are two of the oldest streets in the Old Town of Copenhagen, Denmark, linking Gammel Strand at their eastern end with Rådhusstræde to the west. Snaregade extends from the small square at the future Gammel Strand metro station to Knabrostræde where it turns into Magstræde. The streets are among the few streets in the Old Town of Copenhagen which still feature their original cobbling. Magstræde is associated with Huset i Magstræde, a culture house. 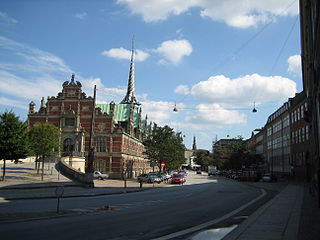 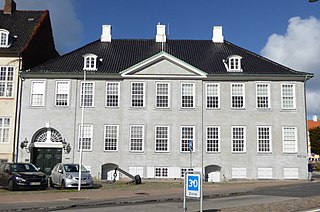 The Stephan Hansen Mansion is a listed town mansion overlooking Wibroes Plads and the Øresund in Helsingør, Denmark. It was built by Philip de Lange and represents the transition from Baroque to Rococo architecture..

Holbæk Barracks is a former military facility from 1913 located in Holbæk, Denmark. The buildings have now been converted into housing, offices and facilities for local associations. Two buildings, Ridehuset and Eksercerhuset, were listed in 2004.

Foss is a global provider of high-tech analytical solutions used mainly in the agricultural and food industries. The company is headquartered in Hillerød, Denmark.

Holbæk Museum is a local history museum in Holbæk, Denmark. It is based in a large complex of historic, mostly half-timbered buildings from the 17th to 19th century surrounding a garden space. One of the buildings was moved to the site in 1937 but the others all stand in their original location. The museum also comprises a pilot boat from 1922 docked in Holbæk's harbor. Holbæk Museum has been part of Museum Vestsjælland since 1 January 2014.

Fuglebakken, also known as Fuglebakkekvarteret, is a mostly residential neighbourhood in the northern part of Frederiksberg in Copenhagen, Denmark. The area is bounded by Godthåbsvej to the south, Nordre Fasanvej to the east, Borups Allé to the north and the S-train line on the municipal border with Copenhagen to the west. It consists of a mixture of single family detached homes, terraced housing and apartment buildings.

Christianelyst is a listed house situated on the northern shore of Bagsværd Lake in the northern suburbs of Copenhagen, Denmark. The Neoclassical property consists of a main wing and two side wings surrounding three sides of a courtyard which is open to the north. The garden to the south of the house slopes down towards the lake.

Belvedere is a Neoclassical country house located at Strandvejen 407 in Klampenborg, Gentofte Municipality, some 15 kilometres north of central Copenhagen, Denmark. It was listed by the Danish Heritage Agency in the Danish registry of protected buildings and places on 3 January 1989.

Christinelund, originally a farm under Nysø Manor, is located a few kilometres east of central Præstø, on the island of Zealand's Jungshoved peninsula, in Vordingborg Municipality in southeastern Denmark. It takes its name from the salonist Christine Stampe and was frequently visited by Hans Christian Andersen in the 1850s, when it was the home of Henrik and Jonna Stampe. The current main building was completed in 1860 to a design by the architect Ferdinand Meldahl. It was listed on the Danish registry of protected buildings and places by the Danish Heritage Agency on 23 February 1978. The property is now operated as a bed and breakfast.

Aggersvold is a manor house and estate located just north of Jyderup, Holbæk Municipality, some 80 kilometres west of Copenhagen, Denmark. The current main building was built in 1833-35 for major-general Harald Rothe (1781-1848). TIt was listed on the Danish registry of protected buildings and places in 1944. 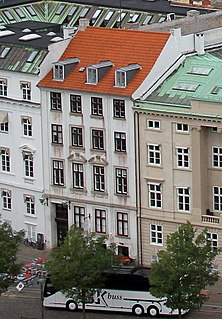 Ved Stranden 16 is a narrow, mid18th-century property]] located opposite Christiansborg Palace in central Copenhagen, Denmark. The building was listed on the Danish registry of protected buildings and places in 1918. It is flanked by the former Hotel Royal to the left and the Gustmeyer House to the right.