Doug Downey is a Canadian politician who was elected to the Legislative Assembly of Ontario during the 2018 general election. He represents the riding of Barrie—Springwater—Oro-Medonte,and is a member of the Progressive Conservative Party of Ontario. [1] [2] [3] Downey was named Parliamentary Assistant to Finance Minister Vic Fedeli shortly after the government was sworn in. [4] He was appointed to the Standing Committee on Finance and Economic Affairs on July 26,2018,vice-chair of the Select Committee on Financial Transparency on October 3,2018;deputy government whip on November 5,2018 and Attorney General on June 20,2019. [5]

Raised in Bond Head,Ontario,Downey received a bachelor's degree in political science from Wilfrid Laurier University,an M.A. specializing in judicial administration from Brock University,a law degree from Dalhousie University and a master of laws in municipal and development law through Osgoode Hall Law School. Downey practiced law as a certified specialist in real estate at nearby Orillia and served two terms on Orillia City Council. In 2007,he was appointed chair of the independent panel on the future of the Trent–Severn Waterway. [6] [7] [8]

In 1994 Downey was a court registrar with the Ontario Court General Division,now the Ontario Superior Court of Justice. Before that,he worked in family court administrations during the summers of 1992 and 1993. After attending law school at Dalhousie University,he articled with Crawford,McKenzie,McLean &Wilford at Orillia and was called to the bar in February 1999. He started his own law firm in 2001:Lewis,Downey,Tornosky &Lassaline,now Downey,Tornosky,Lassaline &Timpano Professional Corporation.[ citation needed ]

Downey has been very active in the Ontario Bar Association. He was elected secretary 2009-2010 and treasurer 2010-2014. He served on several committees and remained active up until his election as MPP in 2018. He was chair of communications for the Canadian Bar Association from 2013 to 2015. He attended the Uniform Law Conference of Canada and was part of a working group on commercial leasing until his election as an MPP in 2018. [9]

He was a member of the Law Society of Ontario Certified Specialist Board [10] and was active as a mentor and sat on several committees.

He was appointed by the provincial minister of government and consumer services as member of the panel on the regulation of home inspectors (2013);the provincial panel on business law reform (2015);and the Business Law Advisory Council (2016). [11]

Downey also taught the law of contracts;property;torts;constitutional and Charter law for Laurentian University at Georgian College from 2005 to 2009.

He was a member of a joint municipal election compliance committee for New Tecumseth, Essa, Adjala–Tosorontio, Innisfil, and Bradford West Gwillimbury from 2010 to 2018.

Springwater is a township in central Ontario, Canada, in Simcoe County, near Barrie. It is the county seat of Simcoe County.

Simcoe North is a federal electoral district in central Ontario, Canada. It was established as a federal riding in 1867.

Simcoe—Grey is a federal electoral district in Ontario, Canada, that has been represented in the House of Commons of Canada since 1997.

Patrick Walter Brown is a Canadian politician who has served as the 51st and current mayor of Brampton since 2018. Entering politics when he won a seat on the Barrie City Council in 2000, Brown later joined the Conservative Party and became a member of Parliament (MP) in 2006. He represented Barrie in the House of Commons until 2015, when he was elected as leader of the Ontario Progressive Conservative (PC) Party and resigned his seat in Parliament. Brown was subsequently elected to represent Simcoe North in the Legislative Assembly of Ontario and became the leader of the Opposition. He served as leader until 2018, when he was expelled from the caucus. He later returned to municipal politics and was elected mayor of Brampton. In 2022, Brown contested for the federal Conservative leadership election, but was disqualified following claims his campaign violated the Canada Elections Act. He was subsequently re-elected as mayor of Brampton. 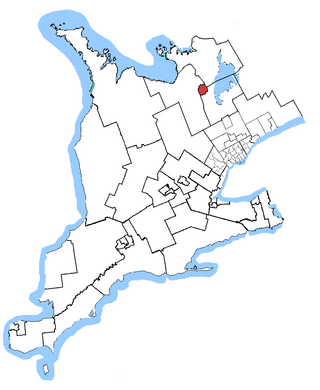 Simcoe North is a provincial electoral district in Ontario, Canada. It was established as a provincial riding in 1996. Its population was 119,401 in 2006.

Fierté Simcoe Pride is an annual festival held in Simcoe County, Ontario, during the end of July and beginning of August each year. It is a celebration of the diversity of the LGBT community in Simcoe County. It is one of the larger regional gay pride festivals in Canada, featuring flag raisings and proclamations from across the County, educational events, artistic and cultural events, and a large closing event. Since forming, the organisation has expanded gradually, involving more year-round events. In 2016, the organisation celebrated its fifth anniversary Pride. 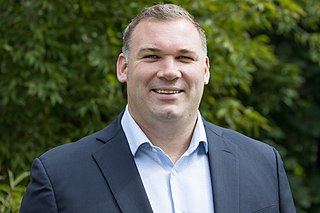 Alexander Nuttall is a Canadian politician who is the current Mayor of Barrie. He served on Barrie City Council from 2006 until 2014, and as the Member of Parliament for the federal electoral district of Barrie—Springwater—Oro-Medonte from 2015 to 2019. He has two children and is employed as the Vice President of sales, marketing and customer service for the telecommunications company, North Frontenac Telephone Company (NFTC). Nuttall won the 2022 Barrie municipal election and he is now serving as Barrie's 47th mayor.

Barrie—Springwater—Oro-Medonte is a provincial electoral district in Ontario, Canada. It elects one member to the Legislative Assembly of Ontario. The riding was created in 2015, and was first contested in the 2018 General Election.

Rudy Cuzzetto is a Canadian politician, who was elected to the Legislative Assembly of Ontario in the 2018 provincial election. He represents the riding of Mississauga—Lakeshore as a member of the Progressive Conservative Party of Ontario.

Doug Shipley is a Canadian politician who was elected to represent the riding of Barrie—Springwater—Oro-Medonte in the House of Commons of Canada in the 2019 Canadian federal election. He previously served on the Barrie City Council for Ward 3 from 2010 to 2019. 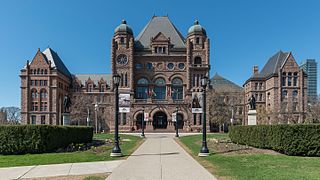 The Accelerating Access to Justice Act, 2021 is a law in the province of Ontario that amended the judicial appointments process in the province and made a number of other changes.

The 2022 Barrie municipal election was held on October 24, 2022, to elect the Mayor of Barrie, Barrie City Council and the Simcoe County District School Board, Simcoe Muskoka Catholic District School Board, Conseil scolaire catholique MonAvenir and Conseil scolaire Viamonde. The election will be held on the same day as elections in every other municipality in Ontario.

Elections were held in Simcoe County, Ontario on October 24, 2022 in conjunction with municipal elections across the province.

The 2018 Barrie municipal election was held on October 22, 2018, to elect a Mayor and 10 city councillors of the city of Barrie, Ontario, Canada. School trustees of the English-language Simcoe County District and Simcoe Muskoka Catholic District School Boards and the French-language Conseil scolaire Viamonde and Conseil scolaire catholique MonAvenir were also elected to represent the 10 wards of Barrie.