Douglas Peter Wickenheiser (March 30, 1961 – January 12, 1999) was a Canadian ice hockey player, who was drafted first overall by the Montreal Canadiens in the 1980 NHL Entry Draft.

Wickenheiser was born in Regina, Saskatchewan. A superstar in Major Junior hockey with the Regina Pats, he led the Western Hockey League in goal scoring (89) during the 1979–80 WHL season, captained the Pats to a berth in the Memorial Cup, and was the CHL Player of the Year. Wickenheiser was rated by The Hockey News as the top draft prospect in 1980 and was subsequently selected first overall by the Montreal Canadiens. Many Canadiens' fans, particularly French Canadian fans who desperately wanted the club to select francophone star Denis Savard, were unhappy with the selection, and Montreal media attention soon turned negative. While Wickenheiser struggled to adjust to the NHL game, Savard (drafted third overall) would quickly become a superstar with the Chicago Blackhawks, further angering some Montreal fans.

In his fourth season with the Canadiens, the club lost patience with Wickenheiser's slow development and traded him to the St. Louis Blues. Probably his most famous moment with the Blues was during the 1985–86 playoffs in a game dubbed the "Monday Night Miracle" on May 12, 1986, when after St. Louis made a large comeback against the Calgary Flames, Wickenheiser scored the overtime winner to force a Game 7 in the Campbell Conference Finals. The Blues would however, lose the deciding game 2–1.

During his NHL career, Wickenheiser also played for the Vancouver Canucks, New York Rangers and Washington Capitals, but did not play in the NHL after the 1989-90 season, spending his last four professional seasons in the minors and overseas. In 556 games, he scored 111 goals and 165 assists.

In August 1994, Wickenheiser had an epithelioid sarcoma (a rare form of cancer), [1] which he had first noticed four years earlier, removed from his wrist. Three years later, in October 1997, the cancer came back and had spread to his lungs, at which point it was inoperable. He died on January 12, 1999, at the age of 37 in St. Louis. He is survived by his wife and three daughters. His life story was remembered in the book The Last Face Off: The Doug Wickenheiser Story written in March 2000 by Ted Pepple, Wickenheiser's father-in-law. The Mid-States Club Hockey Association, the governing body for high school hockey in St. Louis, named their championship trophy for small school/second division teams in his honor.

An arena in his hometown of Regina, Saskatchewan, has been named Doug Wickenheiser Arena in his honor. The arena is located at the corner of Arnason St. and Rochdale Blvd. in the city's northwest corner.

The Doug Wickenheiser Memorial Trophy which is awarded annually by the Western Hockey League to its humanitarian of the year was renamed in 2001 in honour of Wickenheiser.

The Blues have not reissued Wickenheiser's #14 since his death, though it has not been formally retired. Blues' players wore a special helmet decal with the wick of a candle and the number 14 during parts of the 1997–98 and 1998–99 seasons. In 1999, a banner with that logo, which became the symbol of The Fourteen Fund, the official Blues charity established in his memory, was permanently placed in the rafters at the Blues' home arena, the Kiel Center (now the Enterprise Center). The emblem was worn by all NHL players in the 1999 NHL All-Star Game, and was also sold to the public for a small donation and became a popular trend among youth hockey players in St. Louis. One of the two high school state championships played at Enterprise Center is named after him.

Robert Michael Gainey is a former professional ice hockey player who played for the Montreal Canadiens from 1973 until 1989. After retiring from active play, he became a hockey coach and later an executive with the Minnesota North Stars/Dallas Stars organization before returning to Montreal as general manager from 2003 to 2010. Currently, Gainey serves as a team consultant for the St. Louis Blues as well as a volunteer senior advisor for the Peterborough Petes of the Ontario Hockey League. He was inducted into the Hockey Hall of Fame in 1992. In 2017 Gainey was named one of the '100 Greatest NHL Players' in history.

Denis Joseph Savard is a Canadian former professional ice hockey player. He played in the National Hockey League (NHL) from 1980 to 1997, and was elected to the Hockey Hall of Fame in 2000. In 2017 Savard was named one of the '100 Greatest NHL Players' in history. He has also served as head coach of the Chicago Blackhawks of the NHL, and now serves as an ambassador for the Blackhawks' organization. Savard was born in Gatineau, Quebec, but grew up in Montreal. 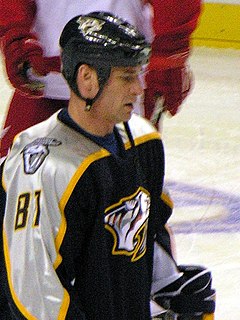 Michael John Sillinger is a Canadian former professional ice hockey player who played in the National Hockey League (NHL) for 17 seasons. Sillinger played for twelve different teams and was traded nine times during his NHL career, both of which stand as league records.

The 1980 NHL Entry Draft was the 18th NHL Entry Draft. It was held at the Montreal Forum. This was the first time that an NHL arena hosted the draft. The National Hockey League (NHL) teams selected 210 players eligible for entry into professional ranks, in the reverse order of the 1979–80 NHL season and playoff standings. This is the list of those players selected. The minimum draft age was lowered from 19 to 18, but prospective draftees had to now be of age by September 15th rather than just be of the correct birth year.

Travis Shawn Moen is a Canadian former professional ice hockey player who most recently played under contract for the Dallas Stars of the National Hockey League (NHL). Although he was born in Swift Current, Saskatchewan, he grew up in Stewart Valley, Saskatchewan. He was originally drafted in the fifth round of the 2000 NHL Entry Draft by the Calgary Flames; however, he never played for the club.

The 1977 Stanley Cup Finals was the championship series of the National Hockey League's (NHL) 1976–77 season, and the culmination of the 1977 Stanley Cup playoffs. It was contested between the Boston Bruins and the defending champion Montreal Canadiens. The Bruins were making their first appearance in the final series since their loss in the 1974 Final. The Canadiens would win the best-of-seven series four games to none, to win their second straight Stanley Cup championship, and 20th overall.

The 1994–95 Montreal Canadiens season was the team's 86th season of play. For the first time since the 1969–70 season, the Canadiens failed to qualify for the Stanley Cup playoffs. 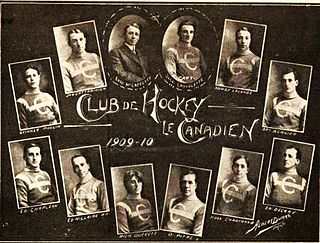 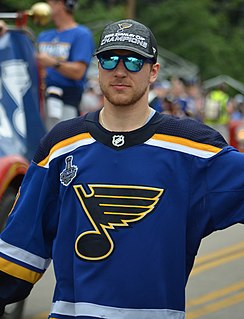 Brayden Michael Schenn is a Canadian professional ice hockey centre and alternate captain for the St. Louis Blues of the National Hockey League (NHL). He was selected by the Los Angeles Kings fifth overall in the 2009 NHL Entry Draft. He also played for the Philadelphia Flyers before being traded to St. Louis in 2017.

Gary Spencer Leeman is a Canadian former professional ice hockey player in the NHL. In 1990, he became the second Toronto Maple Leaf player ever to score 50 goals or more in a single NHL season, after Rick Vaive did it in 1981-82.

The 1987–88 Hartford Whalers season was the Whalers' ninth season in the National Hockey League. 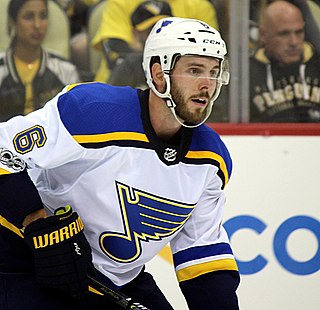 Joel Edmundson is a Canadian professional ice hockey defenceman for the Montreal Canadiens of the National Hockey League (NHL). He previously played for the St. Louis Blues and Carolina Hurricanes.