Last updated November 13, 2020
In this Chinese name, the family name is Niu .

Niu was born in Taipei, Taiwan on June 22, 1966. He grew up in the military dependents' village in Gongguan, Taipei. His father's family is from the Manchu Niohuru clan and his mother's family has military background. His grandfather was a general, so he would often accompany him to visit Chiang Kai-shek. When he was 12, his father was diagnosed with amyotrophic lateral sclerosis and became bed-ridden for 25 years until his death. [2]

His love for Hong Kong cinema may have influenced his later works.

These early successes did not help his career as he grew older. At the age of 19, Niu could not find any roles in films, so he started hanging out with his so-called "corner brothers" and improved his Taiwanese tremendously. [3] By speaking fluent Taiwanese, he was able to get along with the Taiwanese people even though his family originated from Beijing.

Niu is the founder of the production company Red Bean Production Co, which was created in August 2002. [4] He participated in all three movies that he directed but vowed to not appear in any more movies so that he can focus entirely on directing. [5]

In June 2013, he brought Chinese cinematographer Cao Yu into the Navy base in Zhuoying under a false name. The incident was revealed by their photo together on an aircraft carrier. These actions violated certain laws of the Ministry of National Defense. [6] [7] The Navy command investigated it as possible intrusion, which can carry a five-year sentence. On July 16, 2013, Niu admitted his wrongdoing in the court in Kaoshiong and paid NT$ 200,000 for bail. He told the media that he didn't know he broke the law. [8]

On 5 December 2018, a female crew member on the set of Pao Ma filed a police report accusing Niu of sexually assaulting her the previous month. [9] [1] He was subsequently questioned by police officers of the Da'an Precinct and the Taipei District Prosecutors Office, [10] [11] and was indicted in January 2019. [12] [13] [14]

What on Earth Have I Done Wrong?!

What on Earth Have I Done Wrong is the first dramatic film that Niu directed. He was also the main actor. Although the movie is not an autobiography, there are a lot of resemblances between him and the character. The character in the movie is also a director attempting to gather enough money to produce a mockumentory film. The film was initially about the politics in Taiwan; however, Niu took a completely different turn with the film and focused the film on the character. A lot of media commented that this film is a half-biography or a documentary. The film was nominated for the best picture award at the Golden Horse Film Festival and it won the FIPRESCI Prize. [15]

Monga is a gangster movie that takes place in the Wanhua District of Taipei and has a cast of mainly young actors like Mark Chao and Ethan Juan. Niu also participated in the movie as the head of the gang from the Chinese mainland. The movie was a box office success, grossing more than US$ 1.8 million in Taiwan. [16]

The film was selected as the Taiwanese entry for the Best Foreign Language Film at the 83rd Academy Awards. [17]

The cinema of Taiwan is deeply rooted in the island's unique history. Since its introduction to Taiwan in 1901 under Japanese rule, cinema has developed in Taiwan under ROC rule through several distinct stages. It has also developed outside the Hong Kong mainstream and the censorship of the People's Republic of China in the mainland.

The Taipei Golden Horse Film Festival and Awards is a film festival and awards ceremony held annually in Taiwan. It was founded in 1962 by the Government Information Office of Taiwan. The awards ceremony is usually held in November or December in Taipei, though the venue has been shifted around the island in recent times.

Yim Ho (Chinese:嚴浩) is a Hong Kong director most active in the 1980s, and a leader of the Hong Kong New Wave.

Stanley Huang is a Taiwanese-American singer and actor.

Ethan Juan is a Taiwanese actor and model. He rose to prominence with the television series Fated to Love You (2008). Juan won the Best Actor award at the 47th Golden Horse Awards for his role in Monga in 2010.

Joseph Chang is a Taiwanese actor. He is best known for his role in the critically acclaimed 2006 Taiwanese film Eternal Summer, which earned him two Golden Horse Awards nominations for Best Supporting Actor and Best New Performer for his role as Yu Shouheng. He was also nominated in 2006, for Best Actor in a Miniseries or Television Film at the 41st Golden Bell Awards for his role as Paul in Corner of Auction World. He attended the Fu-Hsin Trade and Arts School (復興商工) in Taipei.

Monga is a 2010 Taiwanese gangster film set in 1980s Taipei. The film features Ethan Juan, Mark Chao, Ma Ju-lung, Rhydian Vaughan and Ko Chia-yen. The film was directed and co-written by Doze Niu, who also appears in the film.

The Manchu people in Taiwan constitute a small minority of the population of Taiwan. 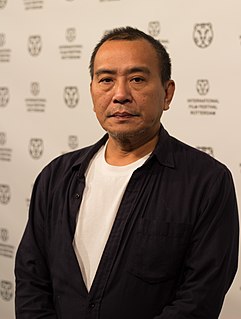 Chang Tso-chi is a Taiwanese film director. His 2002 film The Best Of Times was entered into the 59th Venice International Film Festival. His films won Golden Horse Award for Best Feature Film two times, for The Best of Times (2002) and When Love Comes (2010). 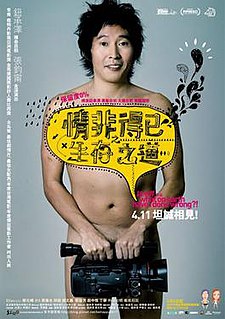 What on Earth Have I Done Wrong?! is a 2007 Taiwanese comedy film directed, co-written, and co-produced by Doze Niu, starring himself as struggling film director-producer "Doze Niu", in his feature film debut. Billed as "an honest outlook inside Doze Niu's life and Taiwan's entertainment industry", the low-budget mockumentary was shot mainly home movie-style with little background music. Most of the actors portrayed themselves.

Ko Chia-yen or Alice Ko is a Taiwanese actress.

Cheng Wei-hao is a Taiwanese film director and screenwriter.

Wang Shih-hsien or Beauties Belt is a Taiwanese singer and actor.

Ma Ju-lung was a Taiwanese actor.

The 56th Golden Horse Awards took place on November 23, 2019 at the Sun Yat-sen Memorial Hall in Taipei, Taiwan. Organized by the Taipei Golden Horse Film Festival Executive Committee, the awards honored the best in Chinese-language films of 2018 and 2019. The ceremony was televised by TTV.