Nakamura initially broke into the wrestling business with Frontier Martial Arts Wrestling (FMW), but was not allowed to be a wrestler by owner Atsushi Onita and instead worked as a referee for the promotion during the mid 1990s. Longing to become a wrestler, he left FMW in 1997 and joined Ultimo Dragon's Toryumón Gym, where he was given the gimmick of “Dragon Kid”, a character he has used for his entire career.

Nobuyoshi Nakamura wanted to be a wrestler for a long time, but he was told that he was too small to become one. He started training in the Frontier Martial-Arts Wrestling dojo in 1994, but ended up as a referee (FMW head Atsushi Onita, wary of injury to smaller wrestlers from his days as a junior heavyweight in All Japan Pro Wrestling, prevented him from trying to achieve his potential). Nakamura never gave up his dream of being a wrestler. He was eventually introduced to Último Dragón by Nakamura's relative Jinsei Shinzaki, who told him that his wrestling school had no size restriction, so he entered the Último Dragón Gym. [3]

Nakamura debuted in 1997 as a first term student, and was given the gimmick of Dragon Kid, Último Dragón's pupil, as he was perceived as the Último Dragón's heir. [4] He spent 1998 wrestling in Mexico, but he did some spot participation with Michinoku Pro and also had a short run with World Championship Wrestling working as "Little Dragon." His only appearance on Monday Nitro would be a victory over Eddie Guerrero via rollup after interference. [5]

In 1999, he debuted in Japan along with the rest of Toryumon. [4] In February, he captured his first title, defeating Dr. Cerebro to win the vacant NWA World Welterweight Title. He would lose the title two months later to SUWA, and in that match, he suffered a bad knee injury that put him out of action for the remainder of the year. [6] He would return to action on the first show of 2000 and proceeded to feud with SUWA. Though he failed to win the NWA World Welterweight Title back from SUWA, he did defeat him in a Mask vs. Hair match on August 24. [4] Shortly after winning, he was attacked by a debuting Darkness Dragon, and they started a feud that would last for a little over two years. It ended on September 8, 2002, when he defeated Darkness Dragon in a Best of Three Falls Mask vs. Mask Match, forcing Darkness to unmask. [4]

Darkness Dragon was booted out of M2K following the loss. He announced the formation of a new stable dubbed Do FIXER, and he invited Kid and Ryo Saito to join him, and they both accepted. On October 28, after Magnum TOKYO dissolved M2K, he announced that he and the remnants of M2K were the real Do FIXER, and that Darkness Dragon - now renamed K-ness - was still a member of the group and was sent into the home army (Seikigun) to cause problems within it. It worked in that Ryo Saito was not welcomed back into Seikigun, but Dragon Kid, however, was. [4]

When Seikigun disbanded at the end of 2002, he joined Masaaki Mochizuki's Shin M2K stable at the start of 2003. [4] He stayed with the group until it dissolved in December, after Mochizuki lost a match to stablemate Kenichiro Arai. After that, Kid would go unaligned until mid-2004, and in May he won that year's El Numero Uno Tournament to the surprise of everyone. [2] In mid-2004, he became a member of Do FIXER, and would stay in it until the very end. During his tenure with them, he won the Open the Brave Gate Championship from inaugural champion Naruki Doi in November 2005, and would hold the Open the Triangle Gate Titles with Ryo Saito and Genki Horiguchi on three separate occasions in 2005 and 2006. [2] During the last few months of 2006, he contracted appendicitis, forcing him out of action for several months.

When Dragon Kid returned in early 2007, Saito decided to end Do FIXER activity following the betrayal of Genki Horiguchi, and brought him along into CIMA's new Typhoon stable. He joined them with a new look, marking the first ever change of his ring attire. When Saito and Susumu Yokosuka started teaming together, he and CIMA started teaming up exclusively with each other, calling themselves CK-1. When CIMA was out injured in mid-2008, Dragon Kid formed a team with Shingo Takagi for that year's Summer Adventure Tag League Tournament. The team proved very successful, even making it to the finals, but they lost out to the previous year's winners Naruki Doi and Masato Yoshino. [8]

On December 28, he, Ryo Saito and Susumu Yokosuka fought a Unit Split Survival Three-Way Six-Man Tag Match against teams from WORLD-1 and Real Hazard, and they lost, bringing about the end of Typhoon. However, he did not remain unaligned for very long, for on January 11, 2009, he joined Shingo Takagi's new unit, KAMIKAZE. On February 15, he, Shingo, and Taku Iwasa won the Open the Triangle Gate titles, but they lost them two months later. [2]

At the end of the year, when the Generation War was going on, the Veteran-gun extended an invite to him to join their ranks. He did not accept nor reject the invitation, which eventually caused his KAMIKAZE stablemates to question where his loyalties lied. After Akira Tozawa interrupted an Ultra Hurricanrana attempt in a six-man tag match on January 11, 2010, causing them and YAMATO to lose, Kid decided to leave KAMIKAZE and side with CIMA, Gamma Susumu Yokosuka and KAGETORA in the WARRIORS-5 group, and by default the Veteran-gun. [2]

Dragon Kid turned heel on January 14, 2011, along with the rest of WARRIORS, when they attacked Masato Yoshino and World-1, and joined forces with Naruki Doi's group. [9] On January 18 the new group was named Blood Warriors. [9] On May 15, the rest of Blood Warriors turned on Dragon Kid and kicked him out of the group, despite the fact that he still held the Open the Triangle Gate Championship with CIMA and Ricochet. He then joined Masaaki Mochizuki's new stable, Junction Three, to battle his former group. As a result, the title was declared vacant. [10] On June 19 Dragon Kid gained a measure of revenge on Blood Warriors, when he and PAC defeated Ryo Saito and Genki Horiguchi to win the Open the Twin Gate Championship. They would lose the title to Blood Warriors representatives CIMA and Ricochet on July 17. [11] On February 9, 2012, Junction Three was forced to disband, after losing a fourteen-man elimination tag team match to Blood Warriors. [12] After joining the Veteran-gun, Dragon Kid won the Open the Brave Gate Championship for the second time on May 6, defeating Ricochet. [13] After a reign of 364 days and nine successful defenses, he lost the title to Masato Yoshino on May 5, 2013. [14] He would go on to team with Oretachi Veteran-gun stablemate K-Ness to win the Open the Twin Gate Championship, and with K-Ness and Masaaki Mochizuki, won the Open the Triangle Gate Championship. He would suffer an injury later on, and would be forced to vacate both titles. On August 17, 2014, Dragon Kid and Masaaki Mochizuki quit Oretachi Veteran-gun to form a new stable with BxB Hulk, which on September 9, 2014 would be named Dia.HEARTS. On February 4, 2016, Dia.HEARTS was forced to disband after losing a match to Monster Express and VerserK. On April 7, Dragon Kid joined the Over Generation unit.

On April 6, 2018, Kid defeated Kagetora to win the vacant Open the Brave Gate Championship for the third time.

Nobuhiko Oshima, better known by his ring name Cima, is a Japanese professional wrestler currently working for Oriental Wrestling Entertainment (OWE), where he also serves as the company's president. He also makes appearences for All Elite Wrestling (AEW). 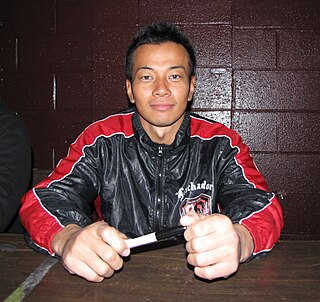 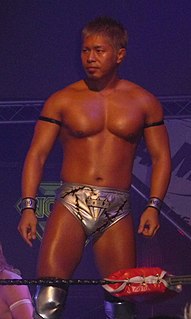 Naruki Doi is a Japanese wrestler for Dragon Gate. He also wrestled for Ring of Honor (ROH) and Total Nonstop Action Wrestling (TNA); in the former promotion, he was a one-time World Tag Team Champion with Shingo Takagi.

Ryo Saito is a Japanese professional wrestler, who currently works for Dragon Gate. He is a former member of the Jimmyz stable, where he was known by the ring name Ryo "Jimmy" Saito. His name is sometimes abbreviated as SaiRyo, so as not to confuse him with SAITO.

New Hazard was a professional wrestling stable in the Japanese promotion Dragon Gate, formed in April 2007. It was founded by former Typhoon and Muscle Outlaw'z members BxB Hulk and Cyber Kong, intending to compete with the two opposing factions. Shingo Takagi and Yamato, who were on tours of the United States at the time, were also announced as members. Jack Evans, a member of Muscle Outlaw'z, joined in May 2007, teaming with Yamato as a mystery partner to defeat the MO'z team of Naruki Doi and Masato Yoshino. Hulk, Kong and Takagi are former two-time holders of the Open the Triangle Gate title.

Terumasa Ishihara, better known by his ring name BxB Hulk, is a Japanese professional wrestler, currently working for Dragon Gate. He was also known for his longstanding rivalry with Shingo Takagi.

Yoshito Sugamoto is a Japanese professional wrestler, better known by the ring name Gamma. He is currently working for the Dragon Gate promotion.

Kenichiro Arai is a Japanese wrestler for Dragon Gate.

Masato Onodera, better known by his ring name Yamato, is a Japanese professional wrestler and former mixed martial artist, who currently works for Dragon Gate. He is a four time Open the Dream Gate Champion.

Makoto Saitō, better known by his ring name K-ness., is a Japanese professional wrestler for Dragon Gate. He is also known for working under the ring name Jimmy K-ness J.K.S.

Tatsuki Fuji, better known by his ring name Don Fujii, is an Japanese wrestler who currently works for Dragon Gate. He was one-half of the inaugural Open the Owarai Twin Gate Champions and is also a former two-time Open the Twin Gate Champions with Masaaki Mochizuki. He was previously in the Crazy MAX and Blood Generation stables.

Yasushi Kanda is a Japanese wrestler currently performing for the Dragon Gate wrestling promotion in Japan. He is considered one of Toryumon's greatest heel characters, and was a founding member of the M2K stable. In his pre-injury days, he was famous for his mohawk hairstyle.

Hiromasa Horiguchi is a Japanese professional wrestler, better known by the ring name Genki Horiguchi. He is currently a full-time wrestler for Dragon Gate. He has also competed in Wrestling Society X and Ring of Honor.

Taku Iwasa is a Japanese professional wrestler best known for his work in Dragon Gate. 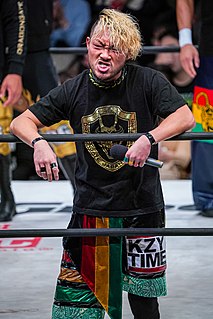 Kazuki Sawada is a Japanese professional wrestler trained by and signed Dragon Gate better known by his ring name Kzy.

Takuya Onodera is a Japanese professional wrestler currently working for the Oriental Wrestling Entertainment promotion under the ring name T-Hawk. He is also known for his work with Mexican promotion International Wrestling Revolution Group (IWRG).