Dream of the Red Chamber (simplified Chinese :红楼梦; traditional Chinese :紅樓夢; pinyin :Hónglóu mèng) (also known as Dream of the Red Mansions) is a 1944 Chinese film directed by Bu Wancang. It is an adaptation of the classic 18th century Qing-era novel by Cao Xueqin.

Redology is the academic study of Cao Xueqin's Dream of the Red Chamber, one of the Four Great Classical Novels of China. There are numerous researchers in this field; most can be divided into four general groups. The first group are the commentators, such as Zhou Chun, Xu Fengyi, Chen Yupi, and others. The second group is the index group, which mainly includes Wang Mengruan and Cai Yuanpei. The third group are the textual critics, including Hu Shih and Yu Pingbo. The final group are the literary critics, including Zhou Ruchang and Li Xifan. 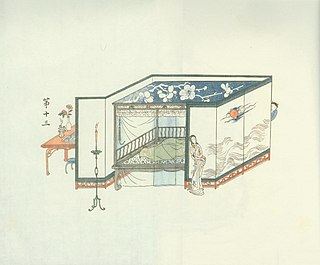 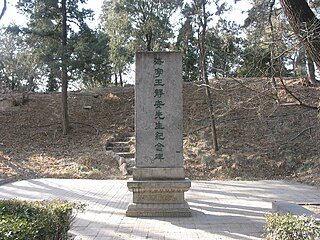 Wang Guowei, courtesy name Jing'an (靜安) or Boyu (伯隅), was a Chinese historian and poet. A versatile and original scholar, he made important contributions to the studies of ancient history, epigraphy, philology, vernacular literature and literary theory.

Lecture Room is a Chinese television programme hosted by China Central Television (CCTV), in which scholars from various disciplines are invited to provide lectures. It was first broadcast on 9 July 2001 on CCTV-10. In its early days, featured topics included biology, physics, economics, history and literature, and the lecturers were from around the world. Its focus has gradually changed, as recent programmes focus more on Chinese history and Chinese culture.

Gu Taiqing was one of the top-ranked women poets of the Qing Dynasty. She is especially known for her ci poetry and for her sequel to the novel Honglou meng. One scholar estimates that there are as many as 1,163 surviving poems written by Gu.

Granny Liu is a character in the 18th century Chinese novel Dream of the Red Chamber. She is an elderly country rustic and a distant relative of Lady Wang through "joining families" and marriage.

Wang Wenjuan(Chinese: 王文娟; pinyin: Wáng Wénjuān; 19 December 1926 – ) is a noted performer in the Yue opera. She is well known for playing the title role Lin Daiyu in the 1962 film of Dream of the Red Chamber, an adaptation of a work by Cao Xueqin.

"Twenty Years a Dream" is a short story written by Chinese author Pu Songling in Strange Stories from a Chinese Studio (1740). One of the earlier entries in the collection, it revolves around a bachelor's romantic relations with a female ghost. The story was favourably received by literary critics. 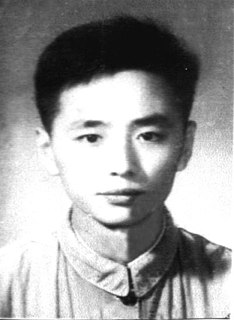 Li Xifan was a Chinese Marxist literary scholar and redologist. He became nationally famous in 1954, when his critique of the revered redologist Yu Pingbo was praised by Mao Zedong, who seized the opportunity to launch a nationwide campaign to criticize the idealism of Yu Pingbo and Hu Shih. Li later served as a long-time editor of the People's Daily and Vice President of the Chinese National Academy of Arts.