Drizzle is a light liquid precipitation consisting of liquid water drops smaller than those of rain – generally smaller than 0.5 mm (0.02 in) in diameter. [1] Drizzle is normally produced by low stratiform clouds and stratocumulus clouds. Precipitation rates from drizzle are on the order of a millimetre (0.04 in) per day or less at the ground. Owing to the small size of drizzle drops, under many circumstances drizzle largely evaporates before reaching the surface and so may be undetected by observers on the ground. The METAR code for drizzle is DZ and for freezing drizzle is FZDZ. [2]

While most drizzle has only a minor immediate impact upon humans, freezing drizzle can lead to treacherous conditions. Freezing drizzle occurs when supercooled drizzle drops land on a surface whose temperature is below freezing. [3] These drops immediately freeze upon impact, leading to the buildup of sheet ice (sometimes called black ice) on the surface of roads.

Drizzle tends to be the most frequent form of precipitation over large areas of the world's oceans, particularly in the colder regions of the subtropics. These regions are dominated by shallow marine stratocumulus and trade wind cumulus clouds, which exist entirely within the marine boundary layer. Despite the low rates of surface accumulation, it has become apparent[ to whom? ] that drizzle exerts a major influence over the structure, coverage, and radiative properties of clouds in these regions.

This has motivated scientists to design more sophisticated and sensitive instruments such as high-frequency radars that can detect drizzle. These studies have shown that the quantity of drizzle is strongly linked to cloud morphology and tends to be associated with updrafts within the marine boundary layer. Increased amounts of drizzle tend to be found in marine clouds that form in clean air masses that have low concentrations of cloud droplets. This interconnection between clouds and drizzle can be explored using high-resolution numerical modelling such as large eddy simulation.

It has been hypothesized by a group of atmospheric scientists at Texas A&M University [4] that particulates in the atmosphere caused by human activities may suppress drizzle. According to this hypothesis, because drizzle can be an effective means of removing moisture from a cloud, its suppression could help to increase the thickness, coverage, and longevity of marine stratocumulus clouds. This would lead to increased cloud albedo on a regional to global scale, and a cooling effect on the atmosphere. Estimates using complex global climate models suggest that this effect may be partially masking the effects of greenhouse gas increases on global surface temperature. However, it is not clear that the representation of the chemical and physical processes needed to accurately simulate the interaction between aerosols, clouds, and drizzle in our current climate models is sufficient to fully understand the global impacts of changes in particulates. [5] 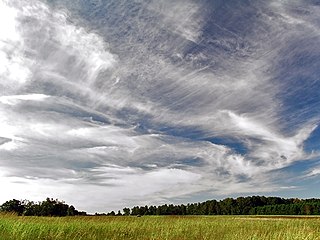 Cirrus is a genus of atmospheric cloud generally characterized by thin, wispy strands, giving the type its name from the Latin word cirrus, meaning a ringlet or curling lock of hair. This cloud can form at any altitude between 16,500 ft and 45,000 ft above sea level. The strands of cloud sometimes appear in tufts of a distinctive form referred to by the common name of "mares' tails". 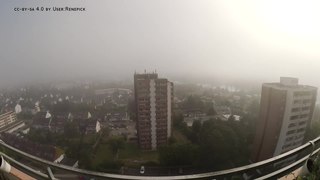 Fog is a visible aerosol consisting of tiny water droplets or ice crystals suspended in the air at or near the Earth's surface. Fog can be considered a type of low-lying cloud, usually resembling stratus, and is heavily influenced by nearby bodies of water, topography, and wind conditions. In turn, fog has affected many human activities, such as shipping, travel, and warfare. 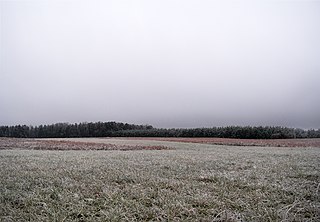 Stratus clouds are low-level clouds characterized by horizontal layering with a uniform base, as opposed to convective or cumuliform clouds that are formed by rising thermals. More specifically, the term stratus is used to describe flat, hazy, featureless clouds of low altitude varying in color from dark gray to nearly white. The word "stratus" comes from the Latin prefix "strato-", meaning "layer". Stratus clouds may produce a light drizzle or a small amount of snow. These clouds are essentially above-ground fog formed either through the lifting of morning fog or through cold air moving at low altitudes over a region. Some call these clouds "high fog" for the fog-like cloud. While light rain may fall, this cloud does not indicate much meteorological activity.

Freezing rain is the name given to rain maintained at temperatures below freezing by the ambient air mass that causes freezing on contact with surfaces. Unlike a mixture of rain and snow, ice pellets, or hail, freezing rain is made entirely of liquid droplets. The raindrops become supercooled while passing through a sub-freezing layer of air hundreds of meters above the ground, and then freeze upon impact with any surface they encounter, including the ground, trees, electrical wires, aircraft, and automobiles. The resulting ice, called glaze ice, can accumulate to a thickness of several centimeters and cover all exposed surfaces. The METAR code for freezing rain is FZRA.

In meteorology, precipitation is any product of the condensation of atmospheric water vapour that falls under gravity. The main forms of precipitation include drizzle, rain, sleet, snow, graupel and hail. Precipitation occurs when a portion of the atmosphere becomes saturated with water vapor, so that the water condenses and "precipitates". Thus, fog and mist are not precipitation but suspensions, because the water vapor does not condense sufficiently to precipitate. Two processes, possibly acting together, can lead to air becoming saturated: cooling the air or adding water vapor to the air. Precipitation forms as smaller droplets coalesce via collision with other rain drops or ice crystals within a cloud. Short, intense periods of rain in scattered locations are called "showers."

Cloud condensation nuclei or CCNs are small particles typically 0.2 µm, or 1/100th the size of a cloud droplet on which water vapor condenses. Water requires a non-gaseous surface to make the transition from a vapour to a liquid; this process is called condensation. In the atmosphere, this surface presents itself as tiny solid or liquid particles called CCNs. When no CCNs are present, water vapour can be supercooled at about −13°C (8°F) for 5–6 hours before droplets spontaneously form. In above freezing temperatures the air would have to be supersaturated to around 400% before the droplets could form. 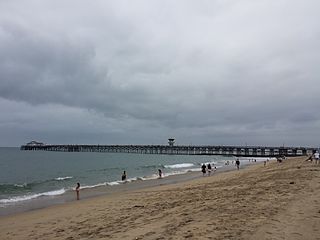 June Gloom is a Southern California term for a weather pattern that results in cloudy, overcast skies with cool temperatures during the late spring and early summer. While it is most common in the month of June, it can occur in surrounding months, giving rise to other colloquialisms, such as "May Gray", "No-Sky July", and, rarely, "Fogust". Low-altitude stratus clouds form over the cool water of the California Current, and spread overnight into the coastal regions of Southern California. The overcast skies often are accompanied by fog and drizzle, though usually not rain. June Gloom usually clears up between mid-morning and early afternoon, depending on the strength of the marine layer, and gives way to sunny skies. On a strong June Gloom day, the clouds and fog may extend inland to the valleys and Inland Empire and may persist into the mid-afternoon or evening.

The Atmospheric Radiation Measurement Climate Research Facility is a United States Department of Energy scientific user facility for the study of global climate change by the national and international research community.

Ship tracks are clouds that form around the exhaust released by ships into the still ocean air. Water molecules collect around the tiny particles (aerosols) from exhaust to form a cloud seed. More and more water accumulates on the seed until a visible cloud is formed. In the case of ship tracks, the cloud seeds are stretched over a long narrow path where the wind has blown the ship's exhaust, so the resulting clouds resemble long strings over the ocean. Ship tracks are a type of homogenitus cloud.

Freezing drizzle is drizzle that freezes on contact with the ground or an object at or near the surface. Its METAR code is FZDZ.

The sea surface microlayer (SML) is the top 1000 micrometers of the ocean surface. It is the boundary layer where all exchange occurs between the atmosphere and the ocean. The chemical, physical, and biological properties of the SML differ greatly from the sub-surface water just a few centimeters beneath.

The following outline is provided as an overview of and topical guide to meteorology: 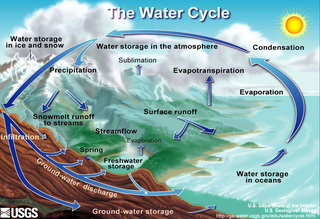 The Global Energy and Water cycle Exchanges project is an international research project and a core project of the World Climate Research Programme (WCRP).

Tropical convective clouds play an important part in the Earth's climate system. Convection and release of latent heat transports energy from the surface into the upper atmosphere. Clouds have a higher albedo than the underlying ocean, which causes more incoming solar radiation to be reflected back to space. Since the tops of tropical systems are much cooler than the surface of the Earth, the presence of high convective clouds cools the climate system.

The North Atlantic Aerosols and Marine Ecosystems Study (NAAMES) was a five-year scientific research program that investigated aspects of phytoplankton dynamics in ocean ecosystems, and how such dynamics influence atmospheric aerosols, clouds, and climate. The study focused on the sub-arctic region of the North Atlantic Ocean, which is the site of one of Earth's largest recurring phytoplankton blooms. The long history of research in this location, as well as relative ease of accessibility, made the North Atlantic an ideal location to test prevailing scientific hypotheses in an effort to better understand the role of phytoplankton aerosol emissions on Earth's energy budget.