DuPont de Nemours, Inc., commonly known as DuPont, is an American company formed by the merger of Dow Chemical and E. I. du Pont de Nemours and Company on August 31, 2017, and the subsequent spinoffs of Dow Inc. and Corteva. Prior to the spinoffs it was the world's largest chemical company in terms of sales. The merger has been reported to be worth an estimated $130 billion. [2] [3] [4] With 2018 total revenue of $86 billion, DowDuPont ranked No. 35 on the 2019 Fortune 500 list of the largest United States public corporations. [5] DuPont is headquartered in Wilmington, Delaware, in the state where it is incorporated, [6] since the founding of the old DuPont in 1802.

On December 11, 2015, E. I. du Pont de Nemours and Company, commonly known as "DuPont", announced a merger with Dow Chemical Company, in an all-stock transaction. The combined company, DowDuPont, had an estimated value of $130 billion, being equally held by both companies’ shareholders, while also maintaining its two headquarters. The merger of the two largest U.S. chemical companies closed on August 31, 2017. [3] [4] [9]

Both companies' boards of directors decided that following the merger, DowDuPont would pursue a separation into three independent, publicly traded companies: an agriculture, a materials science, and a specialty products company.

Advisory Committees were established for each of the businesses. DuPont CEO Ed Breen would lead the Agriculture and Specialty Products Committees, and Dow CEO Andrew Liveris would lead the Materials Science Committee. These Committees were intended to oversee their respective businesses, and would work with both CEOs on the scheduled separation of the businesses’ standalone entities. [14] Announced in February 2018, DowDuPont's agriculture division is named Corteva Agriscience, its materials science division is named Dow, and its specialty products division is named DuPont. [8] In March 2018, it was announced that Jeff Fettig would become executive chairman of DowDuPont on July 1, 2018, and Jim Fitterling would become CEO of Dow Chemical on April 1, 2018. [15] In October 2018, the company's agricultural unit recorded a $4.6 billion loss in the third quarter after lowering its long-term sales and profits targets. [16]

In February 2020, DuPont announced that it is bringing back Edward D. Breen as its CEO after removing former Chief Executive Mark Doyle and CFO Jeanmarie Desmond less than a year after they assumed their roles. Lori D. Koch, previously head of investor relations, assumes the CFO position. [18]

In November 2021, DuPont announced that it would acquire Rogers Corporation in a deal valued at $5.2 billion. [19]

The European Commission opened a probe to assess whether the proposed merger was in line with the EU's respective regulations. The Commission investigated whether the deal reduced competition in areas such as crop protection, seeds and petrochemicals. [20] The closing date for the merger was repeatedly delayed due to these regulatory inquiries. [21] [22]

Ed Breen said the companies were negotiating possible divestitures in their pesticide operations to win approval for the deal. As part of their EU counterproposal, the companies offered to dispose of a portion of DuPont's crop protection business and associated R&D, as well as Dow's acrylic acid copolymers and ionomers businesses. [23] [24]

The remedy submission in turn delayed the Commission's review deadline to April 4, 2017. The intended spins of the company businesses were expected to occur about 18 months after closing. [24] According to the Financial Times , the merger was "on track for approval in March" 2017. [25] Dow Chemical and DuPont postponed the planned deadline during late March, as they struck an $1.6 billion asset swap with FMC Corporation in order to win the antitrust clearances. DuPont acquired the Corporation's health and nutrition business, while selling its herbicide and insecticide properties. [26] [27]

The European Commission conditionally approved the merger as of April, 2017, although the decision was said to consist of over a thousand pages and was expected to take several months to be released publicly. As part of the approval, Dow must also sell off two acrylic acid co-polymers manufacturing facilities in Spain and the US. China conditionally cleared the merger in May, 2017. [28] [27] [29]

According to former United States Secretary of Agriculture during the Clinton administration, Dan Glickman, and former Governor of Nebraska, Mike Johanns, by creating a single, independent, U.S.-based and - owned pure agriculture company, Dow and DuPont would be able to compete against their still larger global peers. [30]

On the other hand, if Monsanto and Bayer, the 1st and 3rd largest biotech and seed firms, together with Dow and DuPont being the 4th and 5th largest biotechnology and seed companies in the world respectively, both went through with the mergers, the so-called "Big Six" in the industry would control 63 percent of the global seed market and 76 percent of the global agriculture chemical market. They would also control 95 percent of corn, soybeans, and cotton traits in the US. Both duopolies would become the "big two" industry dominators.

The merger formed the world's largest chemical company in terms of sales. DuPont is headquartered in Wilmington, Delaware. [31] [32] [33]

Since the spin off, the company has adapted its marketing and branding in order to establish a new identity that is "fundamentally different" from DowDuPont. The company published a list of sustainability commitments to be achieved by 2030 in November 2019. [34] DuPont was fined over $3 million for environmental violations in 2018. [35] In 2019, DuPont led the Toxic 100 Water Polluters Index. [36]

The film Dark Waters showcased a legal case against the predecessor DuPont related to contaminating a town in West Virginia and many Americans with unregulated toxic chemicals which poisoned thousands of individuals. This 2017 case led to DuPont finally settling most of the 3,535 cases for $670.7 million. In addition, in 2005, the EPA fined DuPont $16.5 million. [37]

E. I. du Pont de Nemours and Company, commonly referred to as DuPont, was an American company that was founded in July 1802 in Wilmington, Delaware, as a gunpowder mill by French-American chemist and industrialist Éleuthère Irénée du Pont de Nemours. 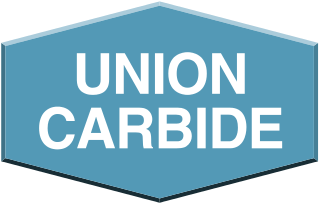 Union Carbide Corporation is an American chemical corporation wholly owned by Dow Chemical Company. It currently employs more than 2,400 people. Union Carbide produces chemicals and polymers that undergo one or more further conversions by customers before reaching consumers. Some are high-volume commodities and others are specialty products meeting the needs of smaller markets. Markets served include paints and coatings, packaging, wire and cable, household products, personal care, pharmaceuticals, automotive, textiles, agriculture, and oil and gas. The company is a former component of the Dow Jones Industrial Average.

The Dow Chemical Company (TDCC) is an American multinational chemical corporation headquartered in Midland, Michigan, United States and is a subsidiary of Dow Inc. The company is among the three largest chemical producers in the world.

Dow Silicones Corporation, formerly known as Dow Corning Corporation, is an American multinational corporation headquartered in Midland, Michigan, United States. Originally established as a joint venture between The Dow Chemical Company and Corning Incorporated, Dow bought out Corning and Dow Corning became a 100% Dow subsidiary. After a brief existence as a DowDuPont-owned company, as Dow spun out from DowDuPont on April 1, 2019, it is now wholly owned by Dow and specializes in silicone and silicon-based technology, and is the largest silicone product producer in the world.

International Flavors & Fragrances is an American corporation that produces flavors, fragrances, and cosmetic actives, which it markets globally. It is headquartered in New York City and has creative, sales, and manufacturing facilities in 47 different countries. The company is a member of the S&P 500 Index.

Dow AgroSciences LLC was a wholly owned subsidiary of the Dow Chemical Company specializing in not only agricultural chemicals such as pesticides, but also seeds and biotechnology solutions. The company was based in Indianapolis, Indiana, in the United States. On 31 January 2006, Dow AgroSciences announced that it had received regulatory approval for the world's first plant-cell-produced vaccine against Newcastle disease virus from USDA Center for Veterinary Biologics. Dow AgroSciences operates brand names such as Sentricon, Vikane, Mycogen®, SmartStax®, Enlist™, Pfister Seed®, PhytoGen®, Prairie Brand Seed®, Alforex Seeds®, Profume, Dairyland Seed®, and Brodbeck Seed®.

Andrew N. Liveris is an Australian former CEO and chairman of The Dow Chemical Company of Midland, Michigan. Liveris has been a member of Dow's board of directors since February 2004, CEO since November 2004 and was elected as chairman of the board effective 1 April 2006. Liveris became CEO in 2004 after holding the position of chief operating officer (COO). Afterwards he served as executive chairman of DowDuPont, where he remains a director. He is chairman of the board of Lucid Motors.

Ellen J. Kullman is a United States business executive. Since November 2019, she has been the Chief executive officer of Carbon (company). She was formerly Chair and Chief Executive Officer of E. I. du Pont de Nemours and Company ("DuPont") in Wilmington and is a former director of General Motors. Forbes ranked her 31st of the 100 Most Powerful Women in 2014. Kullman retired from DuPont on October 16, 2015. 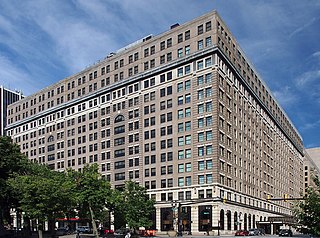 The DuPont Building, occupying the entire block bound by 10th, 11th, Orange and Market streets, was one of the first high-rises in Wilmington, Delaware, United States. It looks out over Rodney Square. The building was built in phases, with the original building constructed in 1908 fronting Rodney Square. At the time, the building housed the offices of DuPont. In 1913, the building was expanded into a "U" by adding wings along 10th and 11th streets, the DuPont Playhouse was added, and a portion of the original 1908 section was converted into the Hotel duPont. The final addition to the building occurred in 1923 when the Orange Street addition was added along with an additional two floors, bringing the floor count to 13 and the height to 124 feet (38 m).

This article is intended to give an overview of the economy of Delaware.

Nemours Alfred I. duPont Hospital for Children is a pediatric hospital located in Wilmington, Delaware. It is controlled by the Nemours Foundation, a non-profit organization created by philanthropist Alfred I. du Pont in 1936 and dedicated to improving the health of children. Historically, it was referred to as the A. I. duPont Institute for Crippled Children or more simply, the DuPont Institute and provides pediatric specialties and subspecialties to infants, children, teens, and young adults up to age 21.

FilmTec Corporation was a US company established in Minnesota in 1977 that specialized in manufacturing the then new thin-film composite membranes used in water treatment applications. In August 1984, the company was acquired by Dow Chemical Company forming its Dow Water & Process Solutions business unit. In August 2017, FilmTec Corporation moved to DowDuPont, the company resulting from the merger of Dow and DuPont. On 2019, after the spin-offs of Dow and Corteva, FilmTec remained now part of DuPont Water Solutions, which is currently among the world's main membrane manufacturers.

Edward D. Breen is an American business executive. He is the Executive Chairman of DuPont. Prior to this, he was the chair of the board and CEO of DuPont, a role he started on November 9, 2015. He also serves as a director of Comcast. Prior to his role at DuPont, Breen was the Chairman and CEO of Tyco International. 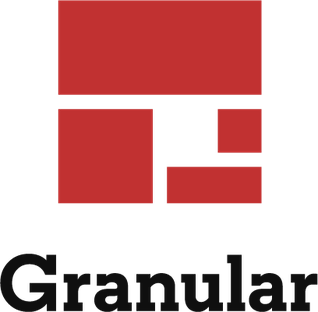 James Ray Fitterling is an American business executive. He is the Chairman and CEO of Dow Inc., Fitterling serves as vice chair of the National Association of Manufacturers, and on the boards of the American Chemistry Council and the U.S.-China Business Council. The first board-appointed out CEO of a Fortune 100 company; he was ranked the world's top LGBT executive by the Financial Times in 2018.

Howard Ungerleider is an American business executive who is the chief financial officer (CFO) and president of Dow Inc., following five years as CFO of DowDuPont Inc.

Corteva, Inc. is a major American agricultural chemical and seed company that was the agricultural unit of DowDuPont prior to being spun off as an independent public company.