The importance of this simple definition stems from the fact that every definition and theorem of order theory can readily be transferred to the dual order. Formally, this is captured by the Duality Principle for ordered sets:

If a statement or definition is equivalent to its dual then it is said to be self-dual. Note that the consideration of dual orders is so fundamental that it often occurs implicitly when writing ≥ for the dual order of ≤ without giving any prior definition of this "new" symbol.

Naturally, there are a great number of examples for concepts that are dual:

Examples of notions which are self-dual include:

Since partial orders are antisymmetric, the only ones that are self-dual are the equivalence relations.

In mathematics, a complete lattice is a partially ordered set in which all subsets have both a supremum (join) and an infimum (meet). Specifically, every non-empty finite lattice is complete. Complete lattices appear in many applications in mathematics and computer science. Being a special instance of lattices, they are studied both in order theory and universal algebra.

In mathematics, a Heyting algebra is a bounded lattice equipped with a binary operation a → b of implication such that ≤ b is equivalent to c ≤. From a logical standpoint, A → B is by this definition the weakest proposition for which modus ponens, the inference rule A → B, A ⊢ B, is sound. Like Boolean algebras, Heyting algebras form a variety axiomatizable with finitely many equations. Heyting algebras were introduced by Arend Heyting (1930) to formalize intuitionistic logic.

In mathematics, the Boolean prime ideal theorem states that ideals in a Boolean algebra can be extended to prime ideals. A variation of this statement for filters on sets is known as the ultrafilter lemma. Other theorems are obtained by considering different mathematical structures with appropriate notions of ideals, for example, rings and prime ideals, or distributive lattices and maximal ideals. This article focuses on prime ideal theorems from order theory.

In mathematical order theory, an ideal is a special subset of a partially ordered set (poset). Although this term historically was derived from the notion of a ring ideal of abstract algebra, it has subsequently been generalized to a different notion. Ideals are of great importance for many constructions in order and lattice theory.

In the mathematical area of order theory, completeness properties assert the existence of certain infima or suprema of a given partially ordered set (poset). The most familiar example is the completeness of the real numbers. A special use of the term refers to complete partial orders or complete lattices. However, many other interesting notions of completeness exist.

In mathematics, a duality translates concepts, theorems or mathematical structures into other concepts, theorems or structures, in a one-to-one fashion, often by means of an involution operation: if the dual of A is B, then the dual of B is A. Such involutions sometimes have fixed points, so that the dual of A is A itself. For example, Desargues' theorem is self-dual in this sense under the standard duality in projective geometry.

In the mathematical area of order theory, there are various notions of the common concept of distributivity, applied to the formation of suprema and infima. Most of these apply to partially ordered sets that are at least lattices, but the concept can in fact reasonably be generalized to semilattices as well.

In the mathematical area of order theory, the compact elements or finite elements of a partially ordered set are those elements that cannot be subsumed by a supremum of any non-empty directed set that does not already contain members above the compact element. This notion of compactness simultaneously generalizes the notions of finite sets in set theory, compact sets in topology, and finitely generated modules in algebra. 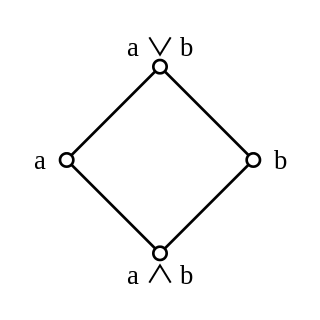