Duho is a proposed language family of South America, originally consisting of two well-established genetic groupings, Hodi–Saliban [1] (even though Raul Zamponi (2018) argues that Hodi is a language isolate) and Ticuna–Yuri. This language stock was proposed by Marcelo Jolkesky (2016), based on his previous but now disclaimed Macro-Daha stock which had also included the Andoque–Urequena languages. [2]

Jolkesky (2016) suggests that the homeland of Proto-Duho was in the Serranía de Chiribiquete. [3] :590

Jolkesky (2016) notes that there are lexical similarities with Chibchan languages due to contact, which may point to the earlier presence of Chibchan speakers in the Orinoco basin. [3] :325

Jolkesky's Duho languages have shared forms in *ʧ for "I", *kʷ for "you" and *t for "we", which are found in all languages.

Several basic words in Duho languages appear to be related. The following examples are given: 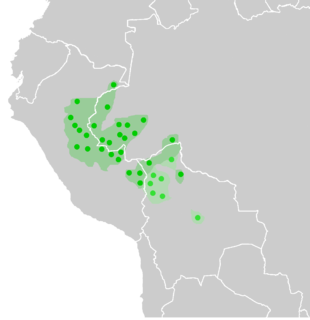 Pano-Tacanan is a proposed family of languages spoken in Peru, western Brazil, Bolivia and northern Paraguay. There are two close-knit branches, Panoan and Tacanan, with 33 languages. There are lexical and grammatical similarities between the two branches, but it has not yet been demonstrated that these are genetic.

Maku or Mako is an unclassified language spoken on the Brazil–Venezuela border in Roraima along the upper Uraricoera and lower Auari rivers, west of Boa Vista. 300 years ago, the Macu territory had been between the Padamo and Cunucunuma rivers to the southeast.

Puquina is a small, putative language family, often, portrayed as a language isolate, which consists of the extinct Puquina language and Kallawaya, although it is assumed that the latter is just a remnant of the former mixed with Quechuan. The Qhapaq simi, which was spoken by the Inca elite, in contrast to the Quechuan-speaking commoners, is thought to be related, as well as, the Leco isolate language. They are spoken by several native ethnic groups in the region surrounding Lake Titicaca and in the north of Chile. Puquina itself is often associated with the culture that built Tiwanaku.

Itonama is a moribund language isolate spoken by the Itonama people in the Amazonian lowlands of north-eastern Bolivia. Greenberg’s (1987) classification of Itonama as Paezan, a sub-branch of Macro-Chibchan, remains unsupported and Itonama continues to be considered an isolate or unclassified language.

The Saliban (Salivan) languages, also known as Piaroa–Saliban or Saliba–Piaroan, are a small proposed language family of the middle Orinoco Basin, which forms an independent island within an area of Venezuela and Colombia dominated by peoples of Carib and Arawakan affiliation.

Candoshi-Shapra is an indigenous American language isolate, spoken by several thousand people in western South America along the Chapuli, Huitoyacu, Pastaza, and Morona river valleys. There are two dialects, Chapara and Kandoashi. It is an official language of Peru, like other native languages in the areas in which they are spoken and are the predominant language in use. Around 88.5 percent of the speakers are bilingual with Spanish. The literacy rate in Candoshi-Shapra is 10 to 30 percent and 15 to 25 percent in the second language Spanish. There is a Candoshi-Shapra dictionary, and grammar rules have been codified.

Arutani is a nearly extinct language spoken by only 17 individuals in Roraima, Brazil and two others in the Karum River area of Bolivar State, Venezuela. It was once spoken on the southern banks of Maracá Island in the Rio Branco area.

Sapé a.k.a. Kaliana is a nearly extinct language spoken along the Paragua River and Karuna River. In 2008 a few elderly speakers were found. Sape is one of the most poorly attested extant languages in South America, and may be a language isolate. There is, however, no comprehensive linguistic data on the language.

Andaqui is an extinct language from the southern highlands of Colombia. It has been linked to the Paezan or Barbacoan languages, but no connections have been demonstrated. It was spoken by the Andaqui people of Colombia.

Andoque is a language spoken by a few hundred Andoque people in Colombia, and is in decline. There were 10,000 speakers in 1908, down to 370 a century later, of which at most 50 are monolingual. The remaining speakers live in the area of the Anduche River, downstream from Araracuara, Solano, Caquetá, Colombia; the language is no longer spoken in Peru. 80% of speakers are proficient in Spanish.

Ticuna–Yuri is a small family, perhaps even a dialect continuum, consisting of at least two, and perhaps three, known languages of South America: the major western Amazonian language Ticuna, the poorly attested and extinct Yurí, and the scarcely known language of the largely uncontacted Carabayo. Kaufman also adds Munichi to the family.

The Ofayé or Opaye language, also Ofaié-Xavante, Opaié-Shavante, forms its own branch of the Macro-Jê languages. It is spoken by only a couple of the small Ofayé people, though language revitalization efforts are underway.

The Yaruro language is an indigenous language spoken by Yaruro people, along the Orinoco, Cinaruco, Meta, and Apure rivers of Venezuela. It is not well classified; it may be an isolate, or distantly related to the extinct Esmeralda language.

Taruma (Taruamá) is a divergent language of northeastern Brazil. It has been reported to be extinct several times since as far back as 1770, but Eithne Carlin discovered the last speakers living among the Wapishana, and is documenting the language. It would seem that "Saluma" is the same language.

The Timotean languages were spoken in the Venezuelan Andes around what is now Mérida. It is assumed that they are extinct. However, Timote may survive in the so-far unattested Mutú (Loco) language, as this occupies a mountain village (Mutús) within the old Timote state.

Lapachu, also known as Apolista or Aguachile, is an extinct Arawakan language of Bolivia. Aikhenvald (1999) classifies it together with Terena, Moxos, and related languages. It is not clear from surviving descriptions whether it was one language or two.

The extinct Urequena language is closely related to Andoque. It is known only from an unpublished word list by Austrian naturalist Johann Natterer that was probably recorded in June or July 1831.