Duke Charles of Mecklenburg (German : Herzog Carl zu Mecklenburg) (30 November 1785 – 21 September 1837) was a member of the House of Mecklenburg-Strelitz and a Prussian soldier who served in the Napoleonic Wars. From 1827 until his death he was President of the Prussian State Council.

Early life and entry into the army 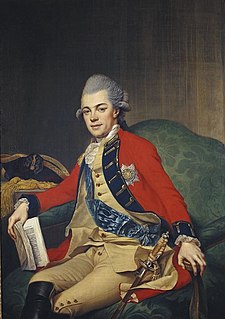 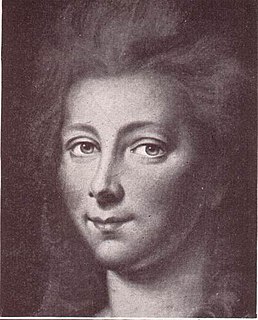 Charlotte Wilhelmine Christiane Marie of Hesse-Darmstadt, was by marriage Duchess of Mecklenburg-Strelitz.

Duke Charles entered into the Prussian service at a young age. By the age of 19 he held a commission as a Captain and by 1806 he had been promoted to the rank Major. He fought for his brother in law King Frederick William III of Prussia during the War of the Fourth Coalition accompanying the king in his flight following the Prussian defeat in the Battle of Jena-Auerstedt. For his services in the Saale campaign Duke Charles was awarded the Order of the Black Eagle. [2] 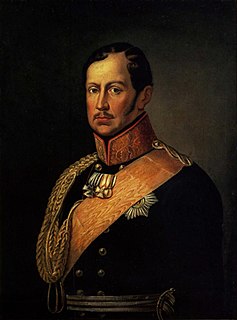 Frederick William III was king of Prussia from 1797 to 1840. He ruled Prussia during the difficult times of the Napoleonic Wars and the end of the Holy Roman Empire. Steering a careful course between France and her enemies, after a major military defeat in 1806, he eventually and reluctantly joined the coalition against Napoleon in the Befreiungskriege. Following Napoleon's defeat he was King of Prussia during the Congress of Vienna, which assembled to settle the political questions arising from the new, post-Napoleonic order in Europe. He was determined to unify the Protestant churches, to homogenize their liturgy, their organization and even their architecture. The long-term goal was to have fully centralized royal control of all the Protestant churches in the Prussian Union of Churches.

By 1813 he had been promoted to the rank Major General and was in command of brigade attached to the force of General Ludwig Yorck von Wartenburg. Duke Charles led his brigade at the Battle of Katzbach. During this campaign while commanding a small column he managed to hold off an attack by French forces who had superior numbers for a whole day before being ordered to withdraw during the night. Shortly after this engagement Duke Charles was instructed by Gebhard Leberecht von Blücher to keep open the communication with the forces of Louis Alexandre Andrault de Langeron and Fabian Gottlieb von Osten-Sacken. Shortly after setting out with his brigade he was attacked by three French columns. Although vastly outnumbered he managed to hold his ground until he seized an opportunity and placing himself at the head of one of his battalions he managed to drive the French back. For this achievement he was awarded the Iron Cross 1st Class. [2] 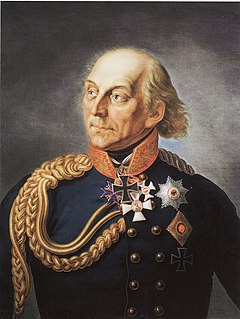 Johann David Ludwig Graf Yorck von Wartenburg was a Prussian Generalfeldmarschall instrumental in the switching of the Kingdom of Prussia from a French alliance to a Russian alliance during the War of the Sixth Coalition. Ludwig van Beethoven's "Yorckscher Marsch" is named in his honor.

The next action he saw was when the Prussian army crossed the Elbe at Wartenburg on 13 October. Given orders to outflank the right wing of the French, Duke Charles took his brigade across the Elbe and attacked the village of Bleddin and succeeded in driving the French out, taking nine of their cannons and a number of prisoners. On 16 October he fought with distinction at the Battle of Möckern. Leading his brigade in a bayonet charge against the French batteries and columns he succeeded in forcing the section of the line they attacked back but at the cost of his whole brigade almost being taken out with Duke Charles and the other officers all being wounded in the charge. [2]

The Elbe is one of the major rivers of Central Europe. It rises in the Krkonoše Mountains of the northern Czech Republic before traversing much of Bohemia, then Germany and flowing into the North Sea at Cuxhaven, 110 km (68 mi) northwest of Hamburg. Its total length is 1,094 kilometres (680 mi).

Wartenburg is a village and a former municipality in Wittenberg district in Saxony-Anhalt, Germany. Since 1 January 2010, it is part of the town Kemberg.

Later that year Duke Charles was appointed to command the 1st of the Line the oldest regiment of foot in the service. [2]

In 1815 Duke Charles was appointed a Lieutenant General and Commandant of the Royal Guards and Grenadiers. He was later appointed President of the Prussian State Council in 1827. [2] [3]

Duke Charles never married and died in Berlin at the age of 51. [1] 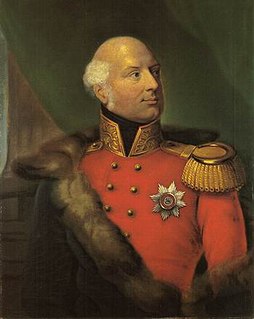 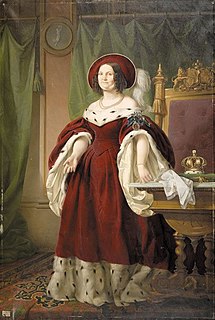 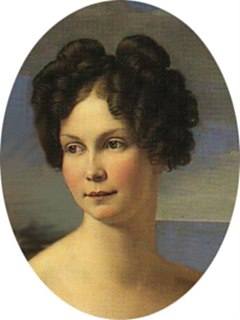 Bernhard Ernst von Bülow was a Danish and German statesman. 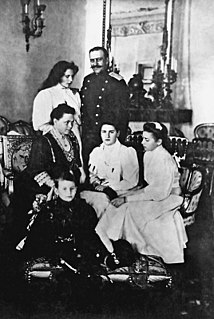 George, Duke of Mecklenburg was the head of the House of Mecklenburg-Strelitz from 1934 until his death. Through his father, he was a descendant of Emperor Paul I of Russia.

Princess Friederike Caroline Luise of Hesse-Darmstadt was a member of the House of Hesse and by marriage a Duchess of Mecklenburg-Strelitz. 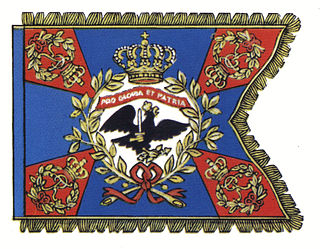 The Royal Prussian Army was the principal armed force of the Kingdom of Prussia during its participation in the Napoleonic Wars. 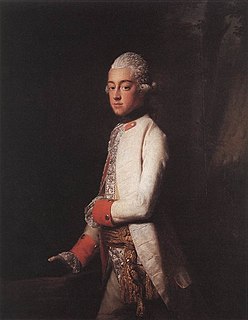 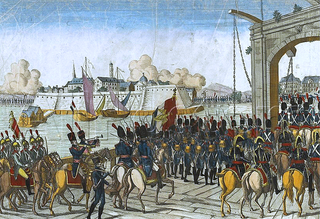 In the Capitulation of Stettin on 29–30 October 1806, Lieutenant General Friedrich Gisbert Wilhelm von Romberg surrendered the garrison and fortress to a much smaller French light cavalry brigade led by General of Brigade Antoine Lasalle. This event was one of a number of surrenders by demoralized Prussian soldiers to equal or inferior French forces after their disastrous defeat at the Battle of Jena-Auerstedt on 14 October. Stettin, now Szczecin, Poland, is a port city on the Oder River near the Baltic Sea, about 120 kilometres (75 mi) northeast of Berlin.