Last updated July 17, 2020
A school of thought in Hinduism

Dvaita Vedanta ( /ˈdvaɪtəvɪˈdɑːntə/ ; Sanskrit : द्वैत वेदान्त) is a sub-school in the Vedanta tradition of Hindu philosophy. Alternatively known as Bhedavāda, Tattvavāda and Bimbapratibimbavāda, the Dvaita Vedanta sub-school was founded by the 13th-century scholar Madhvacharya. [1] The Dvaita Vedanta school believes that God (Vishnu, supreme soul) and the individual souls (jīvātman) exist as independent realities, and these are distinct, being said that Vishnu (Narayana) is independent, and souls are dependent on him. The Dvaita school contrasts with the other two major sub-schools of Vedanta, the Advaita Vedanta of Adi Shankara which posits nondualism – that ultimate reality (Brahman) and human soul are identical and all reality is interconnected oneness, and Vishishtadvaita of Ramanuja which posits qualified nondualism – that ultimate reality (Brahman) and human soul are different but with the potential to be identical. [2] [3]

Dvaita (द्वैत) is a Sanskrit word that means "duality, dualism". [4] The term refers to any premise, particularly in theology on the material and the divine, where two principles (truths) or realities are posited to exist simultaneously and independently. [4] [1]

Dvaita Vedanta is a dualistic interpretation of the Vedas which espouses dualism by theorizing the existence of two separate realities. The first and the only independent reality (svatantra-tattva), states the Dvaita school, is that of Vishnu as Brahman. [5] Vishnu is the supreme Self, in a manner similar to the monotheistic God in other major religions. [6] He is believed to be allmighty, eternal, [7] always existing, everlasting, all-knowing, and compassionate. [8] The second reality is that of dependent (asvatantra-tattva) but equally real universe that exists with its own separate essence. Everything that is composed of the second reality, such as individual soul, matter, and the like exist with their own separate reality. The distinguishing factor of this philosophy, as opposed to monistic Advaita Vedanta, is that God takes on a personal role and is seen as a real eternal entity that governs and controls the universe. [9]

Like Ramanuja, Madhvacharya also embraced Vaishnavism. Madhvacharya posits God as being personal and saguna, that is endowed with attributes and qualities (in human terms, which are not believed to be able to fully describe God) [10] . To Madhvacharya, the metaphysical concept of Brahman in the Vedas was Vishnu. He stated "brahmaśabdaśca Viṣṇaveva", that Brahman can only refer to Vishnu. Scriptures which say different are declared as non-authoritative by him. [11] To him, Vishnu was not just any other deva, but rather the one and only Supreme Being. [12] [13] According to him, the devas are souls of deceased persons who were rewarded for good deeds by being reincarnated into the heavenly worlds and becoming following organs of God's will, [14] which would also be the case with Vayu and Lakshmi. [15] He also believes that they are mortal, and that some of them could sink into lower stages of existence after death. [14] Therefore, he believes that only God shall be worshipped through them, and that worshipping them on their own behalf is an apostasy which emerged during Treta Yuga, and did not already exist during Satya Yuga. [16] According to him, this must also be noticed regarding murtis. [17]

Dvaita Vedanta acknowledges two principles; however, it holds one of them (the sentient) as being eternally dependent on the other. The individual souls are depicted as reflections, images or shadows of the divine, but never in any way identical with the divine. Moksha (liberation) therefore is described as the realization that all finite reality is essentially dependent on the Supreme. [5] God is believed to have shown the way to attain moksha through several avatars. [7]

These five differences are said to explain the nature of the universe. The world is called prapañca (pañca "five") by the Dvaita school for this reason.

According to him, there are three different classes of souls: One class, Mukti-yogyas , which would qualify for liberation, another, the Nitya-samsarins , which would be subject to eternal rebirth or eternal transmigration and a third class, Tamo-yogyas , sadomasochists which would be tasked with spreading irreligion in the material world and being rewarded with being able undergo hellish punishments. [19]

The Upanishads are late Vedic Sanskrit texts of religious teaching and ideas still revered in Hinduism. They are the most recent part of the oldest scriptures of Hinduism, the Vedas, that deal with meditation, philosophy, and ontological knowledge; other parts of the Vedas deal with mantras, benedictions, rituals, ceremonies, and sacrifices. Among the most important literature in the history of Indian religions and culture, the Upanishads played an important role in the development of spiritual ideas in ancient India, marking a transition from Vedic ritualism to new ideas and institutions. Of all Vedic literature, the Upanishads alone are widely known, and their central ideas are at the spiritual core of Hinduism.

Ātman is a Sanskrit word that means inner self, spirit, or soul. In Hindu philosophy, especially in the Vedanta school of Hinduism, Ātman is the first principle, the true self of an individual beyond identification with phenomena, the essence of an individual. In order to attain Moksha (liberation), a human being must acquire self-knowledge. For the different schools of thought, self-realization is that one's true self (Jīvātman) and the ultimate reality (Brahman) are: completely identical, completely different, or simultaneously non-different and different.

Vedanta or Uttara Mīmāṃsā is one of the six (āstika) schools of Hindu philosophy. Literally meaning "end of the Vedas", Vedanta reflects ideas that emerged from the speculations and philosophies contained in the Upanishads, specifically, knowledge and liberation. Vedanta contains many sub-traditions, ranging from dualism to non-dualism, all of which developed on the basis of a common textual connection called the Prasthanatrayi: the Upanishads, the Brahma Sutras and the Bhagavad Gita.

In Hinduism the jiva is a living being, or any entity imbued with a life force. The word itself originates from the Sanskrit verb-root jīv which translate to "to breathe or to live". The jiva, as a metaphysical entity, has been described in various scriptures, such as the Bhagavad Gita, Upanishads and the Vachanamrut. Each sub-school of Vedanta (darshans) describes the role of the jiva with the other metaphysical entities in varying capacities.

Ramanuja or Ramanujacharya was an Indian theologian, philosopher, and one of the most important exponents of the Sri Vaishnavism tradition within Hinduism. His philosophical foundations for devotionalism were influential to the Bhakti movement.

Madhvacharya, sometimes anglicised as Madhva Acharya, and also known as Pūrna Prajña and Ānanda Tīrtha, was a Hindu philosopher and the chief proponent of the Dvaita (dualism) school of Vedanta. Madhva called his philosophy Tattvavāda meaning "arguments from a realist viewpoint".

Saguna Brahman came from the Sanskrit saguṇa (सगुण) "with qualities, gunas" and Brahman (ब्रह्मन्) "the Absolute", close to the concept of immanence, the manifested divine presence.

In Dvaita philosophy, Tamo-yogyas are a group of souls, classified by His Divine Grace Śrīpāda Madhvācārya, which consists of souls who are the damnable. His Divine Grace divides souls into three classes: one class of souls which qualifies for liberation (Mukti-yogyas), another as subject to eternal rebirth or eternal transmigration (Nitya-samsarins), and a third class that is eventually condemned to eternal hell Andhatamisra (Tamo-yogyas). He is the only Hindu philosopher who shares such views of eternal damnation.

The standard problem of evil found in monotheistic religions does not apply to almost all traditions of Hinduism because it does not posit an omniscient, omnipotent, omnibenevolent creator.

Hinduism incorporates diverse views on the concept of God. Different traditions of Hinduism have different theistic views, and these views have been described by scholars as polytheism, monotheism, henotheism, panentheism, pantheism, monism, agnostic, humanism, atheism or Nontheism.

Vyāsatīrtha, also called Vyasaraja or Chandrikacharya, was a Hindu philosopher, scholar and poet belonging to the Dvaita order of Vedanta. As the patron saint of the Vijayanagara Empire, Vyasatirtha was at the forefront of a golden age in Dvaita which saw new developments in dialectical thought, growth of the Haridasa literature under bards like Purandara Dasa and Kanaka Dasa and an amplified spread of Dvaita across the subcontinent. Three of his polemically themed doxographical works Nyayamruta, Tatparya Chandrika and Tarka Tandava documented and critiqued an encyclopaedic range of sub-philosophies in Advaita, Visistadvaita, Mahayana Buddhism, Mimamsa and Nyaya, revealing internal contradictions and fallacies. His Nyayamruta caused a significant stir in the Advaita community across the country requiring a rebuttal by Madhusudhana Saraswati through his text, Advaitasiddhi. 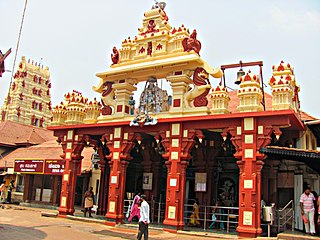 Sadh Vaishnava Sampradaya or Sadh Vaishnavism, also known as Madhva Sampradaya, Bhagavata Sampradaya, Madhva Vaishnavism, is a denomination within the Vaishnavism tradition of Hinduism, founded by the thirteenth century philosopher Madhvacharya. It is a movement in Hinduism that developed during its classical period around the beginning of the Common Era. Philosophically, Madhva tradition is aligned with Dvaita Vedanta, and regards Madhvacharya as its founder or reformer. 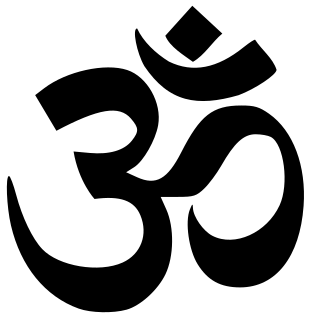 Brahman connotes the highest Universal Principle, the Ultimate Reality in the universe. In major schools of Hindu philosophy, it is the material, efficient, formal and final cause of all that exists. It is the pervasive, infinite, eternal truth and bliss which does not change, yet is the cause of all changes. Brahman as a metaphysical concept is the single binding unity behind diversity in all that exists in the universe.

Shri Uttaradi Math, is one of the premier Dvaita Vedanta monasteries (matha) descended from Jagadguru Śrī Madhvācārya through Padmanabha Tirtha, Jayatirtha and their disciples. The Uttarādi Math is an important institution among the Mādhvas and also deeply respected among the Vaishnavas. The Uttarādi Math is one of the major Hindu monastic institutions that has historically coordinated Madhva tradition and monastic activities through satellite institutions in South India, preserved Sanskrit literature and pursued Dvaita studies. The Uttarādi Math has been a library and a source of historic Sanskrit manuscripts. Along with other Hindu monasteries Sri matha has been active in preserving the Vedas, sponsoring students and recitals, Sanskrit scholarship, and celebrating annual Madhva Jayanthi. The current pīṭādhipati or the acharya holding the pontifical seat is Śrī Satyātma Tīrtha Swāmīji. The Uttaradi math has huge following in South India compared to other Madhva mathas. 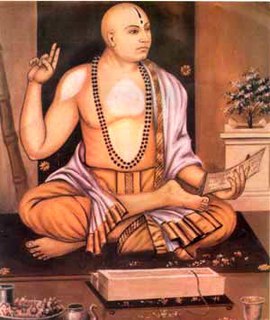 The Embrandiri, also transliterated as Embranthiri, are a Malayali Brahmin subcaste of Tulu origin.

Satyanidhi Tirtha was a Hindu philosopher, scholar and saint. He served as the pontiff of Shri Uttaradi Math from 1638–1660. He was the 19th in succession from Madhvacharya. Satyanidhi Tirtha ruled the pontificate with a remarkable distinction. His life was a saga of supreme spiritual achievements.