A veteran of World War I, Esper worked as a building contractor before switching to the film business in the mid-1920s. He produced and directed inexpensive pictures with titles like Sex Maniac , Marihuana , and How to Undress in Front of Your Husband . To enhance the appeal of these low-budget features, he included scenes containing gratuitous nudity and violence that led some to label him the "father of modern exploitation." [1]

Esper's wife, Hildagarde Stadie, wrote many of the scripts for his films. [2] They employed extravagant promotional techniques that included exhibiting the mummified body of notorious Oklahoma outlaw Elmer McCurdy before it was acquired by Dan Sonney. [3]

Maniac , also known as Sex Maniac, an exploitation/horror film directed by Esper, is a loose adaptation of the Edgar Allan Poe story "The Black Cat" and follows a vaudeville impersonator who becomes an assistant to a mad scientist.

It is considered by many film critics and historians to be the worst film of all time. Danny Peary believes that Maniac is the worst film made, Charlie Jane Anders of Gawker Media 's io9 described it as "possibly the worst movie in history" and Chicago Tribune critic Michael Wilmington wrote that it may be the worst film he had seen, writing: "There are some voyages into ineptitude, like Dwain Esper's anti-classic Maniac, that defy all reason." [4] [5] [6] Rotten Tomatoes placed Maniac on its list of movies "So Bad They're Unmissable", [7] the Italian Vanity Fair included the film on its list of the 20 worst movies, and it is featured in The Official Razzie Movie Guide . [8]

Esper died in San Diego, California at the age of 88. [9] He and Hildagarde had two childrenL Dwain Jr. and Millicent.

Elaine Barrie was an American actress who appeared in several films and one Broadway play. She was the fourth, and last, wife of actor John Barrymore.

They Saved Hitler's Brain is a 1968 science fiction film directed by David Bradley. It was adapted for television from a shorter 1963 theatrical feature film, Madmen of Mandoras, produced by Carl Edwards and directed by David Bradley. The film was lengthened by about 20 minutes with additional footage shot by UCLA students at the request of the distributor. It is often cited as being one of the worst films ever made. Nudity in film is the presentation in a film of at least one person who is nude, partially nude or wearing less clothing than contemporary norms in some societies consider "modest". Since the development of the medium, inclusion in films of any form of sexuality has been controversial, and in the case of most nude scenes has had to be justified as being part of the story, in the concept of "artistically justifiable nudity". Many actors and actresses have appeared nude, or exposing parts of their bodies or dressed in ways considered provocative by contemporary standards at some point in their careers. 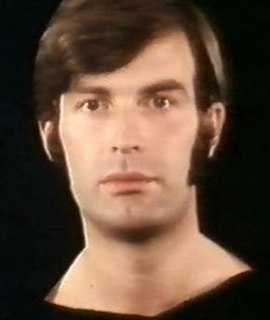 Antony Balch was an English film director and distributor, best known for his screen collaborations with Beat Generation author William S. Burroughs in the 1960s and for the 1970s horror film, Horror Hospital. 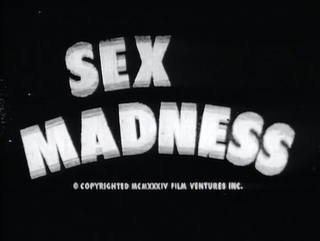 Sex Madness is a 1938 exploitation film directed by Dwain Esper, along the lines of Reefer Madness, supposedly to warn teenagers and young adults of the dangers of venereal diseases, specifically syphilis. 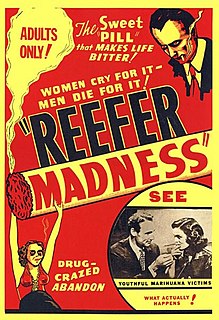 Reefer Madness is a 1936 American film about drugs revolving around the melodramatic events that ensue when high-school students are lured by pushers to try marijuana—from a hit and run accident, to manslaughter, suicide, attempted rape, hallucinations, and descent into madness from marijuana addiction. The film was directed by Louis J. Gasnier and featured a cast of mainly little-known actors.

Maniac, also known as Sex Maniac, is a 1934 black-and-white exploitation/horror film, directed by Dwain Esper and written by Hildagarde Stadie, Esper's wife, as a loose adaptation of the 1843 Edgar Allan Poe story "The Black Cat", with references to his "Murders in the Rue Morgue". Esper and Stadie also made the 1936 exploitation film Marihuana.

Marihuana is a 1936 exploitation film directed by Dwain Esper, and written by Esper's wife, Hildagarde Stadie.

Dannis Peary is an American film critic and sports writer. He has written and edited many books on cinema and sports-related topics. Peary is most famous for his book Cult Movies (1980), which spawned two sequels, Cult Movies 2 (1983) and Cult Movies 3 (1988) and are all credited for providing more public interest to the cult movie phenomenon.

She Shoulda Said No! is a 1949 exploitation film that follows in the spirit of morality tales such as the 1936 films Reefer Madness and Marihuana. Directed by Sam Newfield and starring Lila Leeds, it was originally produced to capitalize on the arrest of Leeds and Robert Mitchum on a charge of marijuana conspiracy.

Bret Wood is an Atlanta-based film director and author.

'Goona-goona epic' refers to a particular type of native-culture exploitation film set in remote parts of the Far East, Southeast Asia, Africa, South America, and the South Pacific. These include documentaries and dramas, both of which rely heavily on travelogue and stock footage scenes of semi-nude native peoples performing exotic rituals and customs. 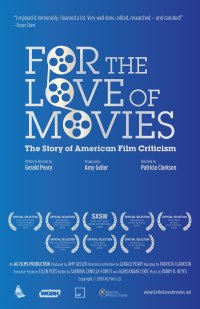 The Cinema Snob is an American comedy webseries created, edited, written, and starring American actor and filmmaker Brad Jones. It started in 2007 on YouTube before copyright claims caused Jones to move the series to its own personal site, TheCinemaSnob.com, in August 2009. The series became part of Channel Awesome in January 2010. Jones is one of three creators, the other two being Doug Walker and Larry Bundy Jr., to remain on the site as of April 2018.

How to Undress in Front of Your Husband is a 1937 short comedic film directed by Dwain Esper.