Last updated November 21, 2022
Team or individual that dominates their sport for an extended length of time

In sports, a dynasty is a team or individual that dominates their sport or league for an extended length of time. Some leagues usually maintain official lists of dynasties, often as part of a hall of fame, but in many cases, whether a team or individual has achieved a dynasty is subjective. This can result in frequent topic of debate among sports fans due to lack of consensus and agreement in the many different variables and criteria that fans may use to define a sports dynasty. [1] [2] [3] Merriam-Webster describes a dynasty as a "sports franchise which has a prolonged run of successful seasons". [4] Within the same sport, or even the same league, dynasties may be concurrent with each other.

A second successful period was in the late 1950s and early 1960s, having won three national league titles and two Coppa Italia in four years (1957–1961) with a squad led by Giampiero Boniperti, John Charles and the 1961 European Footballer of the Year Omar Sívori. [15]
From the 1971–72 to the 1985–86, during Giampiero Boniperti presidency and under the successive management of former footballers Čestmír Vycpálek, Carlo Parola and Giovanni Trapattoni, became Italian champions nine times and won the Italian Cup twice, establishing the most enduring dynasty in Italian association football history. Such success allowed i Bianconeri to form the backbone of the Italian national team during Enzo Bearzot's era, including the 1978 FIFA World Cup semifinalist and 1982 world champion squads. [16] [17] [18] This dominance was extended to the international spotlight starting in 1977 when the club won the UEFA Cup without foreign footballers, an unprecedented achievement for any country's team. [19] Subsequently, the club lifted the Cup Winners' Cup and the European Champions Cup becoming the first club in the history of European football to have won all three seasonal confederation competitions. [20] [21] Finally, after their triumph in the 1984 UEFA Super Cup and the 1985 Intercontinental Cup, the first title for a European side since the restructuring of the tournament occurred five years beforehand; the club also became the first in football history—and remained the world's only one until 2022—to have won all possible official continental tournaments and the world title, [22] [23] [24] leading the UEFA rankings for the first time in the decade's ending.
A further triumphs era for the club was established in the late 1990s and early 2000s when Juventus, under the coaching of Marcello Lippi, won five titles in nine years from 1995 to 2003. In that period, the Torinese club also won one Coppa Italia, four Supercoppa Italiana, one Intercontinental Cup, one Champions League, one UEFA Super Cup and one UEFA Intertoto Cup, leading also the confederation classify in the ending 1990s. [25]
A renewed successful period begins from 2011–12 to 2019–20 seasons, during Andrea Agnelli presidency and with the successive coaching of former player Antonio Conte, Massimiliano Allegri and Maurizio Sarri; where the club won nine straight Serie A titles and four Italian Cups in a row (2015–2018), establishing new all-time record of successive triumphs in both competitions. Also, in the league championship, the club was the first in 20 years and the first in a championship with 20 teams contestants to have won a title unbeaten (2011–12) and has established the historic record of points made in the competition (102 in 2013–14) as well as the records of most wins in a single season (33 in 2013–14) and most consecutive wins during a single season (25 in 2015–16). [26] During this time, Juventus won also four national super cups and also appeared in two Champions League finals. [27]

The following are dynasties from Negro league baseball leagues in the United States.

The problems inherent in identifying sports dynasties are exacerbated in NCAA Football Bowl Subdivision, where the national champion is determined, at least in part, by poll rather than through a tournament. These polls, however, are largely based on win–loss records, thereby relying on minimal subjectivity. When fans of a sport cannot agree on which team within a league or other organization should be considered as holding that organization's championship, discussing whether a team has become a dynasty is more difficult. Because of these problems, teams that consistently win their conference championship and are frequently in contention for national championships are termed dynasties more often than a similarly performing team in another sport or division might.

The National Hockey League and the Hockey Hall of Fame officially recognize nine dynasty teams: [186] [187] The Leafs and Canadiens have multiple dynasty teams recognized by HHOF.

The Soviet Championship League is now known as the Kontinental Hockey League.

Most disputes about dynasties relate to teams that dominated within a conference or division, but either failed to win championships or infrequently won championships. This is exacerbated in NCAA Football Bowl Subdivision (formerly Division I-A), where the national champion is determined, at least in part, by poll rather than through a tournament.

a The 1916 and 1917 VFA seasons were cancelled due to World War I b The Football League suspended operations between 1939–40 and 1945–46 inclusive due to World War II and planning difficulties in its aftermath. c The Allied conquest of Italy caused normal Serie A football to be suspended between 1943 and 1944 and 1945–46, though the 1946 scudetto is considered official.

The Campeonato Nacional de Liga de Primera División, commonly known simply as Primera División in Spain, and as La Liga in English-speaking countries and officially as LaLiga Santander for sponsorship reasons, stylized as LaLiga, is the men's top professional football division of the Spanish football league system. Administered by the Liga Nacional de Fútbol Profesional, it is contested by 20 teams, with the three lowest-placed teams at the end of each season being relegated to the Segunda División and replaced by the top two teams and a play-off winner in that division.

Toni Kukoč is a Croatian-American former professional basketball player who serves as Special Advisor to Jerry Reinsdorf, the owner of the Chicago Bulls. After a highly successful period in European basketball, he was one of the first established European stars to play in the National Basketball Association (NBA). Kukoč played for four NBA teams between 1993 and 2006, winning the NBA Sixth Man of the Year Award in 1996. He is a three-time NBA champion, having won championships with the Michael Jordan-led Chicago Bulls in 1996, 1997, and 1998.

The NBA Finals is the annual championship series of the National Basketball Association (NBA). The Eastern and Western Conference champions play a best-of-seven game series to determine the league champion. The team that wins the series is awarded the Larry O'Brien Championship Trophy, which replaced the original Walter A. Brown Trophy in 1977, though under the same name.

The 2004 NBA Finals was the championship round of the 2003–04 National Basketball Association (NBA) season, and the conclusion of the season's playoffs. This season's NBA Finals was contested between the Western Conference playoff champion Los Angeles Lakers and the Eastern Conference playoff champion Detroit Pistons. The Lakers held home court advantage, and the series was played under a best-of-seven format.

The 1996 NBA Finals was the championship series of the National Basketball Association (NBA)'s 1995–96 season, and the culmination of the season's playoffs. The Western Conference champion Seattle SuperSonics (64–18) played the Eastern Conference champion Chicago Bulls (72–10), with the Bulls holding home court advantage. The teams' 136 combined regular season wins shattered the previous record of 125, set in 1985 between the Los Angeles Lakers who won 62 games and the Boston Celtics who won 63 games in the past regular season. The series, the 50th NBA finals in league history, was played under a best-of-seven format. This was the first championship in the Chicago Bulls' second three-peat.

In sports, the terms Cinderella, "Cinderella story", and Cinderella team are used to refer to situations in which competitors achieve far greater success than would reasonably have been best expected. Cinderella stories tend to gain much media and fan attention as they move closer to the tournament final game. 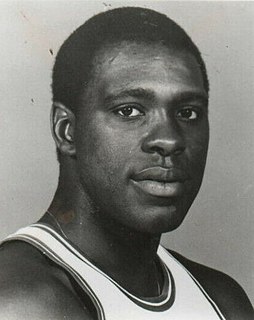 William Quinn Buckner is an American former professional basketball player and coach. He played collegiate basketball for the Indiana University Hoosiers, and won a national championship in 1976. He was a captain of both the last undefeated NCAA Division I basketball champion and the 1976 Olympics gold medal team. Buckner was selected by the Milwaukee Bucks with the 7th pick of the 1976 NBA draft. He had a ten-year NBA career for three teams. In 1984, he won an NBA title with the Celtics.

The Southeast Division is one of the three divisions in the Eastern Conference of the National Basketball Association (NBA). The division consists of five teams, the Atlanta Hawks, the Charlotte Hornets, the Miami Heat, the Orlando Magic and the Washington Wizards.

Košarkaški klub Partizan, commonly referred to as KK Partizan or simply Partizan, is a professional basketball team based in Belgrade, Serbia. It is part of the multi-sports Belgrade-based club Partizan. The club is a founding member and shareholder of the Adriatic Basketball Association, and competes in the ABA League, the EuroLeague and in the Basketball League of Serbia. 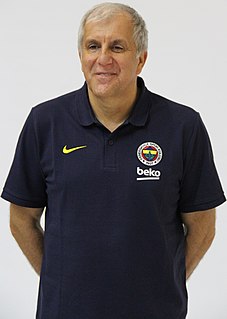 Želimir Obradović is a Serbian professional basketball coach and former professional player who the head coach for Partizan of the Basketball League of Serbia (KLS), the ABA League and the EuroLeague.

Olympiacos B.C., commonly referred to as Olympiacos and Olympiacos Piraeus, is a Greek professional basketball club based in Piraeus, part of the major multi-sport club, Olympiacos CFP. The parent club was founded in 1925, with the basketball team created in 1931, and their home ground is the Peace and Friendship Stadium in Piraeus.

Panathinaikos B.C., also known simply as Panathinaikos, is the professional basketball team of the major Athens-based multi-sport club Panathinaikos A.O. It is owned by the billionaire Giannakopoulos family.

A sports-related curse is a superstitious belief in the effective action of some power or evil, that is used to explain the failures or misfortunes of specific sports teams, players, or even cities. Teams, players, and cities often cite a "curse" for many negative things, such as their inability to win a sports championship, or unexpected injuries.

The 1983 Stanley Cup Finals was the championship series of the National Hockey League's (NHL) 1982–83 season, and the culmination of the 1983 Stanley Cup playoffs. It was contested by the Campbell Conference champion Edmonton Oilers in their first-ever Finals appearance and the defending Wales Conference and Cup champion New York Islanders, in their fourth consecutive and overall Finals appearance. The Islanders won the best-of-seven series, four games to none, to win their fourth consecutive and overall Stanley Cup championship.

The Cleveland sports curse was a sports superstition involving the city of Cleveland, Ohio, and its major league professional sports teams, centered on the failure to win a championship in any major league sport for 52 years, from 1964 to 2016. Three major league teams based in Cleveland contributed to belief in the curse: the Browns of the National Football League (NFL); the Cavaliers of the National Basketball Association (NBA); and the Indians of Major League Baseball (MLB).

Basketballin Greece erupted with the win of the Greece men's national basketball team at the 1987 EuroBasket in Athens, which caused a general basketball euphoria in the country. Since then, the Greece men's national teams have achieved consistent international success, leading Greece to join Russia, Serbia, Croatia, Italy, Spain, France, and Lithuania in the circle of European basketball powers. In addition to the Greece national team's triumph in 1987, they won the gold medal at the 2005 EuroBasket, silver medals at the 1989 EuroBasket, and the 2006 FIBA World Cup, and the bronze medal at the 2009 EuroBasket.