Last updated June 13, 2022
Sino-Tibetan language spoken in Bhutan
Not to be confused with Tsonga language.
‹ The template Contains special characters is being considered for merging. ›

Dzongkha (རྫོང་ཁ་; [dzòŋkʰɑ́] ) is a Sino-Tibetan language spoken by over half a million people in Bhutan; it is the country's sole official and national language. [3] The Tibetan script is used to write Dzongkha.

Dzongkha and its dialects are the native tongue of eight western districts of Bhutan ( viz. Wangdue Phodrang, Punakha, Thimphu, Gasa, Paro, Ha, Dagana and Chukha). [4] There are also some native speakers near the Indian town of Kalimpong, once part of Bhutan but now in North Bengal.

Dzongkha was declared the national language of Bhutan in 1971. [5] Dzongkha study is mandatory in all schools, and the language is the lingua franca in the districts to the south and east where it is not the mother tongue. The 2003 Bhutanese film Travellers and Magicians is in Dzongkha.

There are various systems of romanization and transliteration for Dzongkha, but none accurately represents its phonetic sound. [7] The Bhutanese government adopted a transcription system known as Roman Dzongkha, devised by the linguist George van Driem, as its standard in 1991. [5]

Dzongkha is a tonal language and has two level tones (high and low [8] ), and two contour tone distinctions, totaling four tones. [9] The tone of a syllable determines the allophone of the onset and the phonation type of the nuclear vowel. [10]

Dzongkha is considered a South Tibetic language. It is closely related to and partially intelligible with Sikkimese, and to some other Bhutanese languages such as Chocangaca, Brokpa, Brokkat and Lakha.

Dzongkha bears a close linguistic relationship to J'umowa, which is spoken in the Chumbi Valley of Southern Tibet. [12] It has a much more distant relationship to Standard Tibetan. Spoken Dzongkha and Tibetan are around 50% to 80% mutually intelligible, with the literary forms of both highly influenced by the liturgical (clerical) Classical Tibetan language, known in Bhutan as Chöke, which has been used for centuries by Buddhist monks. Chöke was used as the language of education in Bhutan until the early 1960s when it was replaced by Dzongkha in public schools. [13]

Although descended from Classical Tibetan, Dzongkha shows a great many irregularities in sound changes that make the official spelling and standard pronunciation more distant from each other than is the case with Standard Tibetan. "Traditional orthography and modern phonology are two distinct systems operating by a distinct set of rules." [14]

The following is a sample text in Dzongkha of Article 1 of the Universal Declaration of Human Rights:

All human beings are born free and equal in dignity and rights. They are endowed with reason and conscience and should act towards one another in a spirit of brotherhood. [15]

The Tibetan script is a segmental writing system (abugida) of Indic origin used to write certain Tibetic languages, including Tibetan, Dzongkha, Sikkimese, Ladakhi, Jirel and Balti. It has also been used for some non-Tibetic languages in close cultural contact with Tibet, such as Thakali. The printed form is called uchen script while the hand-written cursive form used in everyday writing is called umê script. This writing system is used across the Himalayas, and Tibet. 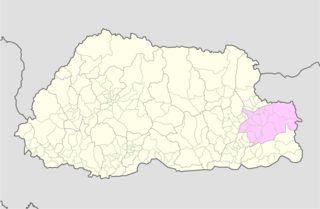 Tshangla is a Sino-Tibetan language of the Bodish branch closely related to the Tibetic languages and much of its vocabulary derives from Classical Tibetan. Tshangla is primarily spoken in Eastern Bhutan and acts as a lingua franca in the country alongside Dzongkha; it is also spoken in Indian state of Arunachal Pradesh and Tibet. Tshangla is the principal pre-Tibetan (pre-Dzongkha) language of Bhutan.

Zhungdra is one of two main styles of traditional Bhutanese folk music, the other being bödra. Arising in the 17th century, zhungdra is an entirely endemic Bhutanese style associated with the folk music of the central valleys of Paro, Thimphu, and Punakha, the heart of the Ngalop cultural area. Bödra, in contrast, evolved out of Tibetan court music.

Toto is a Sino-Tibetan language spoken on the border of India and Bhutan, by the tribal Toto people in Totopara, West Bengal along the border with Bhutan. It is also spoken in Subhapara, Dhunchipara, and Panchayatpara hillocks on India-Bhutan border in Jalpaiguri district, West Bengal (Ethnologue).

The Sikkimese language, also called Sikkimese, Bhutia, or Drenjongké, Dranjoke, Denjongka, Denzongpeke and Denzongke, belongs to the Tibeto-Burman languages. It is spoken by the Bhutia in Sikkim, India and in parts of Province No. 1, Nepal. The Sikkimese people refer to their own language as Drendzongké and their homeland as Drendzong.

Thimphu District is a dzongkhag (district) of Bhutan. Thimphu is also the capital of Bhutan and the largest city in the whole kingdom.

There are two dozen languages of Bhutan, all members of the Tibeto-Burman language family except for Nepali, which is an Indo-Aryan language, and Bhutanese Sign Language. Dzongkha, the national language, is the only native language of Bhutan with a literary tradition, though Lepcha and Nepali are literary languages in other countries. Other non-Bhutanese minority languages are also spoken along Bhutan's borders and among the primarily Nepali-speaking Lhotshampa community in South and East Bhutan. Chöke is the language of the traditional literature and learning of the Buddhist monastics.

The Khengkha language, or Kheng, is an East Bodish language spoken by ~40,000 native speakers worldwide, in the Zhemgang, Trongsa, and Mongar districts of south–central Bhutan.

Gongduk or Gongdu is an endangered Sino-Tibetan language spoken by about 1,000 people in a few inaccessible villages located near the Kuri Chhu river in the Gongdue Gewog of Mongar District in eastern Bhutan. The names of the villages are Bala, Dagsa, Damkhar, Pam, Pangthang, and Yangbari (Ethnologue).

Lhokpu, also Lhobikha or Taba-Damey-Bikha, is one of the autochthonous languages of Bhutan spoken by the Lhop people. It is spoken in southwestern Bhutan along the border of Samtse and Chukha Districts. Van Driem (2003) leaves it unclassified as a separate branch within the Sino-Tibetan language family.

Ashi also spelled Ashe or Azhi, is a Bhutanese honorary title literally meaning "Lady". The title is prefixed to the given name, and is borne by female Bhutanese nobility and by female members of the Bhutanese royal family. The masculine form is Dasho, meaning "Lord", which is held by all Members of Parliament; a number of senior officials, including deputy ministers and district magistrates; senior civil servants and others as a form of Royal award, and by courtesy prominent landowners. Ashi can also mean "Miss" although that is not the intended use of the term. It is similar to the Arabic title Lalla also meaning Lady held by noblewomen.

The Takpa or Dakpa language, Dakpakha, known in India as Tawang Monpa, also known as Brami in Bhutan, is an East Bodish language spoken in the Tawang district of Arunachal Pradesh, claimed by Tibet as a part of Lho-kha Sa-khul, and in northern Trashigang District in eastern Bhutan, mainly in Kyaleng, Phongmed Gewog, Dangpholeng and Lengkhar near Radi Gewog. Van Driem (2001) describes Takpa as the most divergent of Bhutan's East Bodish languages, though it shares many similarities with Bumthang. SIL reports that Takpa may be a dialect of the Brokpa language and that it been influenced by the Dzala language whereas Brokpa has not.

Laya is a Tibetic variety spoken by indigenous Layaps inhabiting the high mountains of northwest Bhutan in the village of Laya, Gasa District. Speakers also inhabit the northern regions of Thimphu and Punakha Districts. Its speakers are ethnically related to the Tibetans. Most speakers live at an altitude of 3,850 metres (12,630 ft), just below the Tsendagang peak. Laya speakers are also called Bjop by the Bhutanese, sometimes considered a condescending term. There were 1,100 speakers of Laya in 2003.

The Lunana language, Lunanakha is a Tibetic language spoken in Bhutan by some 700 people in 1998. Most are yak-herding pastoralists. Lunana is a variety of Dzongkha, the national language of Bhutan.