EMedia Productions (Branded as EMedia Mo!; lit. 'Your EMedia'!) is a radio and television production company based in Zamboanga City serving its base city as well as the province of Basilan and Zamboanga Sibugay.

EMedia Productions currently operates as a content provider of the Westwind Broadcasting Network. [3]

The establishment of this network was unplanned. It was early morning of September 9, 2013 when the Zamboanga Siege erupted at Lustre St., Sta. Catalina, Zamboanga City. The ground zero of the siege was few blocks away from the Radio Mindanao Network (RMN) studios at ZAMEVECO Building, Pilar St., Zamboanga City. It disrupts the regular programming of their radio station both RMN's DXRZ 900 AM and I FM 96.3 and took the coverage in order to give updates to the Zamboangenos. [4]

Days has gone and the demand for the coverage arises. The company then decides to provide live stream via public television. [5] With all collective photos, live scenes and footages they have during the siege, it then formed the establishment of RMN TV Zamboanga via UStream, and later through public television on channel 37, headed by their broadcasters, Bong Simbajon, Gil Climaco, Jimmy Villaflores, and Weng Dela Pena. [6] [7] [8] [9] [10] The television broadcasting services was then provided by EMedia Productions, a division of Alberei Advertising Corporation. While the studios were provided by RMN Zamboanga.

Alberei Advertising Corporation is an advertising company based in Zamboanga City with divisions that has expertise in marketing and advertising. They own several billboards for rent and provides advertising services for the city.

On September 20, 2013, RMN Zamboanga announces their availability on TV through channel 57, and on Cable TV via Mindanao Cable Television, on channel 98.

At the middle of their test broadcast, DXRZ 900 AM gained a lot of popularity that the people wanted them to be heard over the FM Radio. By that time, only a few uses AM radio and most of their listeners can only hear them thru mobile with the FM band application. Though I FM 96.3 provided the FM broadcast, the company decided to formalize RMN FM Zamboanga on 105.9Mhz in order for I FM 96.3 to return on its regular programming, while RMN FM Zamboanga will serve as the relay FM Station for RMN's DXRZ 900AM following their live coverage of the Zamboanga Siege.

The siege ended in October 2013, yet another event struck the city with worst flash flood of its history. [11] [12] Likewise, RMN's DXRZ 900 AM with the relay on RMN TV Zamboanga, RMN FM Zamboanga took the coverage of the said incident. Their live broadcast both on TV and radio of these two events made them more popular to Zamboangenos.

The series of events popularizes their first slogan, Grabe Man! Dwele Sa'yo? (lit. 'That was severe! Was that hurt you?'), a spoof slogan at the midst on the popularity of "Chagalog", a mix of Tagalog words such as Grabe Man and Chavacano words such as Dwele Sa'yo. [13] The slogan was accidentally popularized by Gil Climaco when he always reacted with the words "Grabe Man" during their daily programming.

After such series of events and the city normalizes, they started variety of programming such as religious programs from Victory Church Zamboanga. Soon after, a relay programming from Radio Mindanao Network of Cebu City was made upon their broadcasting agreement with their parent company. RMN's popularity on TV and radio made their local competitor GBPI TV 11 and their subsidiary Magic 95.5 to debut a similar programming named "Dateline Teleradyo" as their counterpart. [14]

However, months after their success, the men behind RMN TV Zamboanga gone in separate ways and ended up with misunderstanding. Weng Dela Pena moved to Brigada News FM as one of their major anchorman in Brigada News Manila, before moving to Radyo Pilipinas 1 738 kHz, and eventually Super Radyo DZBB 594 kHz. [15] While Jimmy Villaflores being the barangay chairman of Sta. Catalina took immediate response for his constituents which was devastated by the Zamboanga Siege. [16] The TV Network then decided to split from Radio Mindanao Network and establish their own. EMedia Productions of Alberei Advertising Corporation set their own TV Network and formed with the same branding "EMedia Productions". With Alberei's EMedia were Bong Simbajon, Gil Climaco while Jimmy Villaflores, who later became as the city councilor of Zamboanga City, helped them in formation of the company. They move to their own studios at RBB Building, Villa Theresa Subdivision, Maria Clara L. Lobregat Highway, Zamboanga City. Simbajon, Climaco, and Villaflores became the head anchors of their news program with the debut of "Ronda De Noche" (Chavacano: Nightly Patrol) and "Report Del Pueblo" (Chavacano: Report of the City).

EMedia Productions (DXAX-DTV) is broadcast on digital TV UHF 40 in both Zamboanga City and Basilan.

Aside on free TV in Zamboanga City and Basilan, EMedia can be seen through other means of media coverage: [17]

Lists below are the major programs of EMedia Productions. EMedia also offers short-time air block for major events that is happening to Zamboanga such as local festivities, religious observance, and political matters.

*the word "solid" was added to their current slogan as their strong message for their loyal viewers.

Radio Mindanao Network, Inc. (RMN) is one of the largest radio networks in the Philippines. Its corporate office is located at the 4th Floor State Condominium I Bldg, Salcedo St., Legaspi Village, Makati, and its main headquarters are located at the RMN Broadcast Center, Don Apolinario Velez St., Cagayan de Oro. while the radio studios are located in Guadalupe, Makati and Greenhills, San Juan City.

ABS-CBN Zamboanga, was an owned and operated television station of Philippine television network ABS-CBN Corporation. Its studios and transmitter are at the ABS-CBN Broadcast Center, San Jose Road, Zamboanga City.

Global Satellite Technology Services is a broadcast radio and television company in the Philippines. Its original station FUBC TV-9 in Zamboanga was an affiliate of BBC from 1974 to 1986, ABS-CBN in 1986–1994 and GMA Network from 1995 until April 1996.

Umagang Kay Ganda was a Philippine morning show broadcast by ABS-CBN. The program premiered on June 25, 2007, and aired every weekday mornings from 4:55 AM to 8:00 AM on the network's Umaganda morning block. It also aired worldwide via TFC. The program was ABS-CBN's longest-running morning show.

DXLA-TV is a commercial television station owned by GMA Network Inc. Its studio and transmitter are located at Brgy. Cabatangan, Zamboanga City. 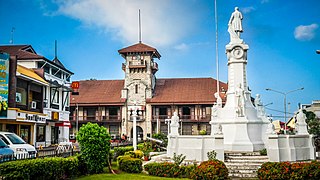 DXRZRMN Zamboanga is a radio station owned and operated by the Radio Mindanao Network. The station's studio is located in Zamaveco Bldg., Pilar St., Zamboanga City.

DXBE-TV channel 31, is a television station of Broadcast Enterprises and Affiliated Media, Inc. In Zamboanga City. The station's transmitter is located at Brgy. Cabatangan, Zamboanga City.

The Mayor of Zamboanga City and is the head of the executive branch of the Zamboanga City's government. The mayor holds office at Zamboanga City Hall. Like all local government heads in the Philippines, the mayor is elected via popular vote, and may not be elected for a fourth consecutive term. In case of death, resignation or incapacity, the vice mayor becomes the mayor.

DXGB-TV channel 11, is a TV5 Network, Inc.-affiliated station in Zamboanga City. It is the flagship station of Golden Broadcasting Professionals, Incorporated, a local broadcast entity. Its main broadcast facilities and transmitter are located at the GBPI Building, Campaner Street, Zamboanga City.

DXWR, broadcasting as 96.3 iFM Music and News, is a radio station owned and operated by Radio Mindanao Network. The station's studio and transmitter are located at the 2nd Floor, Zameveco Bldg., Pilar St., Zamboanga City.

DXRH-TV/GNN TV43 is a TV station owned by First United Broadcasting Corporation and currently an affiliate of Global News Network in the Philippines. Its studios and transmitter are located at Zamboanga City.