An EPPO code, formerly known as a Bayer code, is an encoded identifier that is used by the European and Mediterranean Plant Protection Organization (EPPO), in a system designed to uniquely identify organisms – namely plants, pests and pathogens – that are important to agriculture and crop protection. EPPO codes are a core component of a database of names, both scientific and vernacular. Although originally started by the Bayer Corporation, the official list of codes is now maintained by EPPO. [1]

All codes and their associated names are included in a database (EPPO Global Database). In total, there are over 68,500 species listed in the EPPO database, including: [2]

Plants are identified by a five-letter code, other organisms by a six-letter one. In many cases the codes are mnemonic abbreviations of the scientific name of the organism, derived from the first three or four letters of the genus and the first two letters of the species. [3] For example, corn, or maize ( Zea mays ), was assigned the code "ZEAMA"; the code for potato late blight ( Phytophthora infestans ) is "PHYTIN". The unique and constant code for each organism provides a shorthand method of recording specie. The EPPO code avoids many of the problems caused by revisions to scientific names and taxonomy which often result in different synonyms being in use for the same species. When the taxonomy changes, the EPPO code stays the same. [3] The EPPO system is used by governmental organizations, conservation agencies, and researchers. [4] [5] 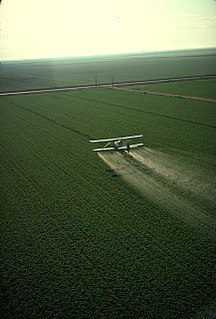 Pesticides are substances that are meant to control pests, including weeds. The term pesticide includes all of the following: herbicide, insecticides nematicide, molluscicide, piscicide, avicide, rodenticide, bactericide, insect repellent, animal repellent, antimicrobial, and fungicide. The most common of these are herbicides which account for approximately 80% of all pesticide use. Most pesticides are intended to serve as plant protection products, which in general, protect plants from weeds, fungi, or insects.

In biology, a common name of a taxon or organism; also known as a vernacular name, English name, colloquial name, trivial name, trivial epithet, country name, popular name, or farmer's name; is a name that is based on the normal language of everyday life; this kind of name is often contrasted with the scientific name for the same organism, which is Latinized. A common name is sometimes frequently used, but that is by no means always the case. 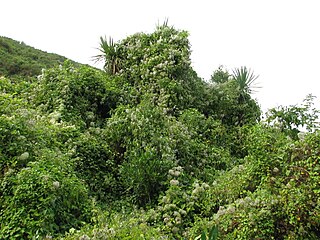 A number of introduced species, some of which have become invasive species, have been added to New Zealand's native flora and fauna. Both deliberate and accidental introductions have been made from the time of the first human settlement, with several waves of Polynesian people at some time before the year 1300, followed by Europeans after 1769.

The International Plant Protection Convention (IPPC) is a 1951 multilateral treaty overseen by the Food and Agriculture Organization that aims to secure coordinated, effective action to prevent and to control the introduction and spread of pests of plants and plant products. The Convention extends beyond the protection of cultivated plants to the protection of natural flora and plant products. It also takes into consideration both direct and indirect damage by pests, so it includes weeds.

Biopesticides, a contraction of 'biological pesticides', include several types of pest management intervention: through predatory, parasitic, or chemical relationships. The term has been associated historically with [biological control] – and by implication – the manipulation of living organisms. Regulatory positions can be influenced by public perceptions, thus: 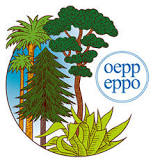 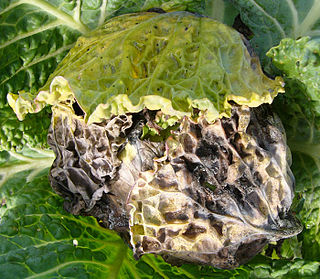 Phytophthora lateralis is a soil-borne plant pathogen that causes cedar root disease in Lawson cypresses in Northern USA. This pathogen was first noted to cause disease in around 1920 on nursery stock near Seattle. Pacific yew is also vulnerable to P. lateralis but less susceptible than Lawson cypress trees, and tree mortality has only been observed in areas where C. lawsoniana trees were also infected. Asiatic species of Chamaecyparis are generally described as resistant to P. lateralis, although this pathogen is occasionally isolated from Chamaecyparis obtusa in nurseries.

CABI, is a not-for-profit inter-governmental development and information organisation focusing primarily on agricultural and environmental issues in the developing world, and the creation, curation and dissemination of scientific knowledge.

Taxonomy (general) is the practice and science of classification of things or concepts, including the principles that underlie such classification. It is a so-called Compound (linguistics) of the two Greek words "tatto" τάττω/τάσσω and "onomazo" ὀνομάζω. Thence, taxonomy means "ordering through naming".

Plant pathology has developed from antiquity, but scientific study began in the Early modern period and developed in the 19th century.

Pest risk analysis (PRA) is a form of risk analysis conducted by regulatory plant health authorities to identify the appropriate phytosanitary measures required to protect plant resources against new or emerging pests and regulated pests of plants or plant products. Specifically pest risk analysis is a term used within the International Plant Protection Convention (IPPC) and is defined within the glossary of phytosanitary terms. as "the process of evaluating biological or other scientific and economic evidence to determine whether an organism is a pest, whether it should be regulated, and the strength of any phytosanitary measures to be taken against it". In a phytosanitary context, the term plant pest, or simply pest, refers to any species, strain or biotype of plant, animal or pathogenic agent injurious to plants or plant products and includes plant pathogenic bacteria, fungi, fungus-like organisms, viruses and virus like organisms, as well as insects, mites, nematodes and weeds.