ERT3 (Greek : Ελληνική Ραδιοφωνία Τηλεόραση 3) is a regional broadcasting center in Thessaloniki that belongs to the Hellenic Broadcasting Corporation (ERT), the public service broadcaster in Greece. It provides radio and television programming with Northern Greek perspectives. 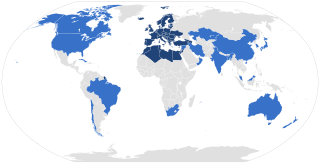 The European Broadcasting Union is an alliance of public service media organisations, established on 12 February 1950. The organisation is made up of 115 member organisations in 56 countries, and 31 associate members from a further 20 countries. It is best known for producing the Eurovision Song Contest. It also hosted debates between candidates for the European Commission presidency for the 2014 and 2019 parliamentary elections but is unrelated to the European Union itself.

Greece participated in the Eurovision Song Contest 2009 with the song "This Is Our Night" sung by Sakis Rouvas. The Greek national television broadcaster Ellinikí Radiofonía Tileórasi (ERT) announced that it had internally selected Rouvas to represent Greece in the Eurovision Song Contest on July 15, 2008, making Greece the first country to pick an artist for the 2009 edition.

Greece participated in the Eurovision Song Contest 2017 with the song "This Is Love" written by Dimitris Kontopoulos, Romy Papadea and John Ballard. The song was performed by Demy. Initially, two artists were to compete in a national final However, these plans were abandoned on 13 January when Demy and Dimitris Kontopoulos were instead internally selected to represent the nation. The Greek national broadcaster Hellenic Broadcasting Corporation (ERT) held a national final on 6 March 2017, at which three songs written by Kontopoulos were performed by Demy. The song with the highest percentage was selected represent the country. Eventually, "This Is Love" performed by Demy was selected as the Greek entry for the 2017 in Kyiv, Ukraine.