E pluribus unum ( /iːˈplɜːrɪbəsˈuːnəm/ ee PLUR-ib-əs OO-nəm, Classical Latin:  [eː ˈpluːrɪbʊs ˈuːnʊ̃] , Latin pronunciation:  [e ˈpluribus ˈunum] ) – Latin for "Out of many, one" [1] [2] (also translated as "One out of many" [3] or "One from many" [4] ) – is a traditional motto of the United States, appearing on the Great Seal along with Annuit cœptis (Latin for "he approves the undertaking [lit. 'things undertaken']") and Novus ordo seclorum (Latin for "New order of the ages") which appear on the reverse of the Great Seal; its inclusion on the seal was approved by an Act of Congress in 1782. [2] While its status as national motto was for many years unofficial, E pluribus unum was still considered the de facto motto of the United States from its early history. [5] Eventually, the United States Congress passed an act (H. J. Resolution 396), adopting "In God We Trust" as the official motto in 1956. [6]

That E PLURIBUS UNUM has thirteen letters makes its use symbolic of the thirteen original states, like the thirteen stripes on the US flag.

Meaning of the motto

The meaning of the phrase originates from the concept that out of the union of the original Thirteen Colonies emerged a new single nation. [8] It is emblazoned across the scroll and clenched in the eagle's beak on the Great Seal of the United States. [8] [9]

The 13-letter motto was suggested in 1776 by Pierre Eugene du Simitiere to the committee responsible for developing the seal. At the time of the American Revolution, the phrase appeared regularly on the title page of the London-based Gentleman's Magazine , founded in 1731, [10] [11] which collected articles from many sources into one periodical. This usage in turn can be traced back to the London-based Huguenot Peter Anthony Motteux, who had employed the adage for his The Gentleman's Journal, or the Monthly Miscellany (1692–1694). The phrase is similar to a Latin translation of a variation of Heraclitus's tenth fragment, "The one is made up of all things, and all things issue from the one" (ἐκ πάντων ἓν καὶ ἐξ ἑνὸς πάντα). A variant of the phrase was used in "Moretum", a poem belonging to the Appendix Virgiliana, describing (on the surface at least) the making of moretum , a kind of herb and cheese spread related to modern pesto. In the poem text, color est e pluribus unus describes the blending of colors into one. St Augustine used a variant of the phrase, ex pluribus unum facere (make one out of many), in his Confessions. [12] But it seems more likely that the phrase refers to Cicero's paraphrase of Pythagoras in his De Officiis , as part of his discussion of basic family and social bonds as the origin of societies and states: "When each person loves the other as much as himself, it makes one out of many (unum fiat ex pluribus), as Pythagoras wishes things to be in friendship." [13]

The first coins with E pluribus unum were dated 1786 and struck under the authorization of the State of New Jersey by Thomas Goadsby and Albion Cox in Rahway, New Jersey. [14] The motto had no New Jersey linkage but was likely an available die that had been created by Walter Mould the previous year for a failed federal coinage proposal. [15] Walter Mould was also authorized by New Jersey to strike state coppers with this motto and did so beginning in early 1787 in Morristown, New Jersey. Lt. Col. Seth Read of Uxbridge, Massachusetts was said to have been instrumental in having E pluribus unum placed on U.S. coins. [16] Seth Read and his brother Joseph Read had been authorized by the Massachusetts General Court to mint coppers in 1786. In March 1786, Seth Read petitioned the Massachusetts General Court, both the House and the Senate, for a franchise to mint coins, both copper and silver, and "it was concurred". [17] [18] E pluribus unum, written in capital letters, is included on most U.S. currency, with some exceptions to the letter spacing (such as the reverse of the dime). It is also embossed on the edge of the dollar coin. (See United States coinage and paper bills in circulation).

According to the U.S. Treasury, the motto E pluribus unum was first used on U.S. coinage in 1795, when the reverse of the half-eagle ($5 gold) coin presented the main features of the Great Seal of the United States. E pluribus unum is inscribed on the Great Seal's scroll. The motto was added to certain silver coins in 1798, and soon appeared on all of the coins made out of precious metals (gold and silver). In 1834, it was dropped from most of the gold coins to mark the change in the standard fineness of the coins. In 1837, it was dropped from the silver coins, marking the era of the Revised Mint Code. The Coinage Act of 1873 made the inscription a requirement of law upon the coins of the United States. E pluribus unum appears on all U.S. coins currently being manufactured, including the Presidential dollars that started being produced in 2007, where it is inscribed on the edge along with "In God We Trust" and the year and mint mark. After the revolution, Rahway, New Jersey became the home of the first national mint to create a coin bearing the inscription E pluribus unum.

In a quality control error in early 2007 the Philadelphia Mint issued some one-dollar coins without E pluribus unum on the rim; these coins have since become collectibles.

The 2009 and 2010 pennies feature a new design on the back, which displays the phrase E pluribus unum in larger letters than in previous years. [1]

The Great Seal is a principal national symbol of the United States. The phrase is used both for the physical seal itself, which is kept by the United States Secretary of State, and more generally for the design impressed upon it. The obverse of the Great Seal depicts the national coat of arms of the United States. and the reverse features an unfinished pyramid topped by an Eye of Providence. The year of the U.S. Declaration of Independence, 1776, is noted in Roman numerals on at the base of the pyramid. The seal contains three Latin phrases: E Pluribus Unum, Annuit cœptis, and Novus ordo seclorum.

The cent, the United States one-cent coin, often called the "penny", is a unit of currency equaling one one-hundredth of a United States dollar. It has been the lowest face-value physical unit of U.S. currency since the abolition of the half-cent in 1857. The first U.S. cent was produced in 1787, and the cent has been issued primarily as a copper or copper-plated coin throughout its history.

Charles Thomson was an Irish-born Patriot leader in Philadelphia during the American Revolution and the secretary of the Continental Congress (1774–1789) throughout its existence. As secretary, Thomson, a Founding Father of the United States, prepared the Journals of the Continental Congress, and his and John Hancock's names were the only two to appear on the first printing of the United States Declaration of Independence. 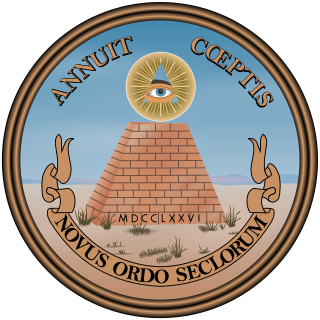 The phrase Novus ōrdō sēclōrum is the second of two mottos added by the secretary of the Congress of the Confederation, Charles Thomson, on the reverse of the Great Seal of the United States.

The Coinage Act of 1864 was a United States federal law passed on April 22, 1864, which changed the composition of the one-cent coin and authorized the minting of the two-cent coin. The Director of the U.S. Mint developed the designs for these coins for final approval of the Secretary of the Treasury. As a result of this law, the phrase "In God We Trust" first appeared, on the 1864 two-cent coin. An Act of Congress, passed on March 3, 1865, allowed the Mint Director, with the Secretary's approval, to place the phrase on all gold and silver coins that "shall admit the inscription thereon." In 1956, "In God We Trust" replaced "E Pluribus Unum" as the national motto. All currency was printed and minted with the new motto.

The modern motto of the United States of America, as established in a 1956 law signed by President Dwight D. Eisenhower, is "In God we trust". The phrase first appeared on U.S. coins in 1864. 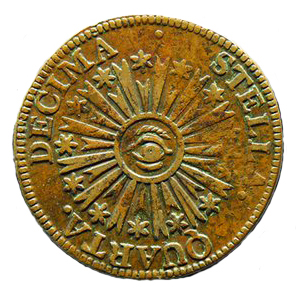 Stella quarta decima is a motto appearing on Vermont copper coinage struck in 1785 and 1786. The coins were issued during the period when Vermont was an independent state (1777–1791), sometimes referred to as the Vermont Republic.

The Fugio cent, also known as the Franklin cent, is the first official circulation coin of the United States. Consisting of 0.36 oz (10 g) of copper, it was designed by Benjamin Franklin and minted only in 1787. Its design is very similar to a 1776 Continental Currency dollar coin that was produced in pattern pieces as potential Continental currency but was never circulated.

Wikiquote has quotations related to E pluribus unum .
This page is based on this Wikipedia article
Text is available under the CC BY-SA 4.0 license; additional terms may apply.
Images, videos and audio are available under their respective licenses.