The fourth baron was Lord Chancellor of Ireland, and a distinguished soldier who fought at the Battle of Knockdoe; his grandson, the seventh baron, was also a notable soldier. The eighth baron, commonly known as "the blind lord", was one of the leading Irish statesmen of his time, and led the opposition to the Government's taxation policy in the 1570s. His son, the ninth baron, was an open Roman Catholic, and led the opposition to the Penal Laws in the early 17th century. The tenth baron was a notable military commander who served in the Nine Years War with the Earl of Essex and Lord Mountjoy. The fourteenth Baron represented Ratoath in the Irish House of Commons, and was a friend of Jonathan Swift. The third Earl served as Lord-Lieutenant of Dublin. [1]

The fourth Earl sat as Member of Parliament for Galway Borough, and in 1881 he was created Baron Howth, of Howth in the County of Dublin, in the Peerage of the United Kingdom. All these titles became extinct upon his death in 1909 as he left no male heir. [2] The family seat, Howth Castle, remained in the hands of their descendants in the female line, the Gaisford-St Lawrence family, until the twenty-first century. [3] 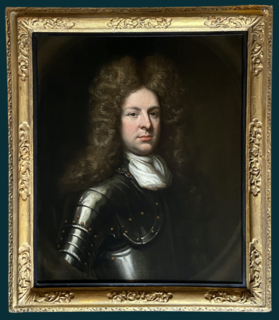 Robert St Lawrence, 3rd Baron Howth was a leading statesman in 15th-century Ireland who held the office of Lord Chancellor of Ireland. Through his second marriage, he was a close connection to the new Tudor dynasty, to which his son was staunchly loyal.

Christopher St Lawrence, 8th Baron Howth was an Irish politician and peer. He was a member of the Privy Council of Ireland, and played a leading part in the Government of Ireland in the 1560s, but he later went into opposition and was imprisoned as a result. He was nicknamed the Blind Lord.

Christopher St Lawrence, 10th Baron Howth was an Anglo-Irish statesman and soldier of the Elizabethan and Jacobean era. His personal charm made him a favourite of two successive English monarchs, and he was also a soldier of great courage and some ability, who fought under the Earl of Essex and Lord Mountjoy during the Nine Years' War. However, his bitter quarrels with the Lord Deputy of Ireland, his feuds with other leading families of the Anglo-Irish Pale, and his suspected involvement in the conspiracy which led to the Flight of the Earls, damaged his reputation. He is best remembered for the legend that he was kidnapped by the "Pirate Queen" Granuaile when he was a small boy.