Last updated May 13, 2022
First epoch of the Jurassic Period

The Early Jurassic Epoch (in chronostratigraphy corresponding to the Lower Jurassic Series) is the earliest of three epochs of the Jurassic Period. The Early Jurassic starts immediately after the Triassic-Jurassic extinction event, 201.3 Ma (million years ago), and ends at the start of the Middle Jurassic 174.1 Ma.

Certain rocks of marine origin of this age in Europe are called "Lias" and that name was used for the period, as well, in 19th-century geology. [4] In southern Germany rocks of this age are called Black Jurassic.

Origin of the name Lias

There are two possible origins for the name Lias: the first reason is it was taken by a geologist from an English quarryman's dialect pronunciation of the word "layers"; [5] secondly, sloops from north Cornish ports such as Bude would sail across the Bristol Channel to the Vale of Glamorgan to load up with rock from coastal limestone quarries (lias limestone from South Wales was used throughout North Devon/North Cornwall as it contains calcium carbonate to fertilise the poor quality Devonian soils of the West Country); the Cornish would pronounce the layers of limestone as 'laiyers' or 'lias'; leac is Gaelic for "flat stone". [5]

There has been some debate [6] over the actual base of the Hettangian Stage, and so of the Jurassic System itself. Biostratigraphically, the first appearance of psiloceratid ammonites has been used; but this depends on relatively complete ammonite faunas being present, a problem that makes correlation between sections in different parts of the world difficult. If this biostratigraphical indicator is used, then technically the Lias Group—a lithostratigraphical division—spans the Jurassic / Triassic boundary.

There are extensive Liassic outcrops around the coast of the United Kingdom, in particular in Glamorgan, North Yorkshire and Dorset. The 'Jurassic Coast' of Dorset is often associated with the pioneering work of Mary Anning of Lyme Regis. The facies of the Lower Jurassic in this area are predominantly of clays, thin limestones and siltstones, deposited under fully marine conditions.

Lias Group strata form imposing cliffs on the Vale of Glamorgan coast, in southern Wales. Stretching for around 14 miles (23 km) between Cardiff and Porthcawl, the remarkable layers of these cliffs, situated on the Bristol Channel are a rhythmic decimetre scale repetition of limestone and mudstone formed as a late Triassic desert was inundated by the sea. [7]

During this period, ammonoids, which had almost died out at the end-of-Triassic extinction, radiated out into a huge diversity of new forms with complex suture patterns (the ammonites proper). Ammonites evolved so rapidly, and their shells are so often preserved, that they serve as important zone fossils. There were several distinct waves of ammonite evolution in Europe alone. [8]

The Early Jurassic was an important time in the evolution of the marine reptiles. The Hettangian saw the already existing Rhaetian ichthyosaurs and plesiosaurs continuing to flourish, while at the same time a number of new types of these marine reptiles appeared, such as Ichthyosaurus and Temnodontosaurus among the ichthyosaurs, and Eurycleidus , Macroplata , and Rhomaleosaurus among the plesiosaurs (all Rhomaleosauridae, although as currently defined this group is probably paraphyletic). All these plesiosaurs had medium-sized necks and large heads. In the Toarcian, at the end of the Early Jurassic, the thalattosuchians (marine "crocodiles") appeared, as did new genera of ichthyosaurs ( Stenopterygius , Eurhinosaurus , and the persistently primitive Suevoleviathan ) and plesiosaurs (the elasmosaurs (long-necked) Microcleidus and Occitanosaurus , and the pliosaur Hauffiosaurus ).

On land, a number of new types of dinosaurs—the heterodontosaurids, scelidosaurs, stegosaurs, and tetanurans—appeared, and joined those groups like the coelophysoids, prosauropods and the sauropods that had continued over from the Triassic. Accompanying them as small carnivores were the sphenosuchian and protosuchid crocodilians. In the air, new types of pterosaurs replaced those that had died out at the end of the Triassic. But in the undergrowth were various types of early mammals, as well as tritylodont synapsids, lizard-like sphenodonts, and early lissamphibians.

The Jurassic is a geologic period and stratigraphic system that spanned from the end of the Triassic Period 201.3 million years ago (Mya) to the beginning of the Cretaceous Period, approximately 145 Mya. The Jurassic constitutes the middle period of the Mesozoic Era and is named after the Jura Mountains, where limestone strata from the period were first identified.

The Aalenian is a subdivision of the Middle Jurassic Epoch/Series of the geologic timescale that extends from about 174.1 Ma to about 170.3 Ma. It was preceded by the Toarcian and succeeded by the Bajocian. 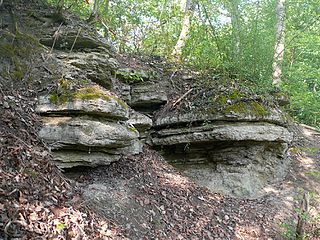 In the geologic timescale, the Anisian is the lower stage or earliest age of the Middle Triassic series or epoch and lasted from 247.2 million years ago until 242 million years ago. The Anisian Age succeeds the Olenekian Age and precedes the Ladinian Age.

In the geologic timescale the Bathonian is an age and stage of the Middle Jurassic. It lasted from approximately 168.3 Ma to around 166.1 Ma. The Bathonian Age succeeds the Bajocian Age and precedes the Callovian Age.

The Hettangian is the earliest age and lowest stage of the Jurassic Period of the geologic timescale. It spans the time between 201.3 ± 0.2 Ma and 199.3 ± 0.3 Ma. The Hettangian follows the Rhaetian and is followed by the Sinemurian. 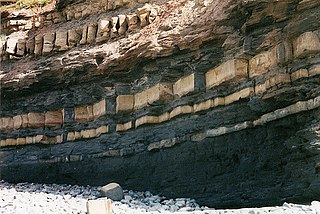 In the geologic timescale, the Sinemurian is an age and stage in the Early or Lower Jurassic Epoch or Series. It spans the time between 199.3 ± 2 Ma and 190.8 ± 1.5 Ma. The Sinemurian is preceded by the Hettangian and is followed by the Pliensbachian.

The Pliensbachian is an age of the geologic timescale and stage in the stratigraphic column. It is part of the Early or Lower Jurassic Epoch or Series and spans the time between 190.8 ± 1.5 Ma and 182.7 ± 1.5 Ma. The Pliensbachian is preceded by the Sinemurian and followed by the Toarcian.

In the geologic timescale, the Wuchiapingian or Wujiapingian is an age or stage of the Permian. It is also the lower or earlier of two subdivisions of the Lopingian Epoch or Series. The Wuchiapingian spans the time between 259.51 and 254.14 million years ago (Ma). It was preceded by the Capitanian and followed by the Changhsingian.

In the geologic time scale, the Changhsingian or Changxingian is the latest age or uppermost stage of the Permian. It is also the upper or latest of two subdivisions of the Lopingian Epoch or Series. The Changhsingian lasted from 254.14 to 251.902 million years ago (Ma). It was preceded by the Wuchiapingian and followed by the Induan. 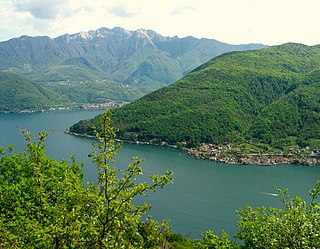 The Ladinian is a stage and age in the Middle Triassic series or epoch. It spans the time between 242 Ma and ~237 Ma. The Ladinian was preceded by the Anisian and succeeded by the Carnian. 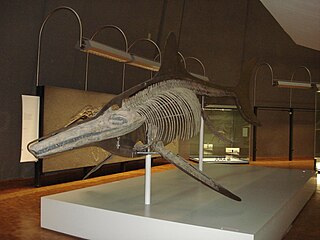 Temnodontosaurus is an extinct genus of ichthyosaur from the Early Jurassic period. They lived between 200 and 175 million years ago (Hettangian-Toarcian) in what is now Western Europe and Chile. They lived in the deeper areas of the open ocean. University of Bristol paleontologist Jeremy Martin described the genus Temnodontosaurus as "one of the most ecologically disparate genera of ichthyosaurs".

The Blue Lias is a geological formation in southern, eastern and western England and parts of South Wales, part of the Lias Group. The Blue Lias consists of a sequence of limestone and shale layers, laid down in latest Triassic and early Jurassic times, between 195 and 200 million years ago. The Blue Lias is famous for its fossils, especially ammonites.

Waterloo Bay is an area of foreshore in Larne on the east coast of County Antrim, Northern Ireland. It is of particular interest to geologists because it provides a clear, complete and accessible example of the sequences from Upper Triassic to Lower Jurassic, when the rock types changed from land to marine.

The Gabbs Formation is a geologic formation in Nevada. It preserves fossils dating back to the Late Triassic and Early Jurassic periods, and is one of the few formations in the United States known to include the Triassic-Jurassic boundary. In 2007, an exposure of the Gabbs Formation at New York Canyon was proposed a candidate GSSP for the Hettangian stage, the first stage of the Jurassic. However, the New York Canyon section was ultimately not selected as Hettangian GSSP, which instead went to the Kuhjoch section of Austria in 2010.

The Kendlbach Formation is a Late Triassic to Early Jurassic (Hettangian) geological formation in Austria and Italy. It contains the Global Boundary Stratotype Section and Point (GSSP) for the Hettangian stage at the Kuhjoch section in the Karwendel Mountains of Austria.