The East Branch Delaware River is one of two branches that form the Delaware River. It is approximately 75 mi (121 km) long, and flows through the U.S. state of New York. It winds through a mountainous area on the southwestern edge of Catskill Park in the Catskill Mountains for most of its course, before joining the West Branch along the northeast border of Pennsylvania with New York. For a long stretch it serves as the Blue Line, the park's boundary. Much of it is paralleled by State Route 30.

The river was impounded just north of Downsville in the mid-20th century to create Pepacton Reservoir, part of the New York City water supply system supplying drinking water to the City. It is a popular destination for fly fishing for brown trout.

In 1881 John Burroughs, a native of the area, published "A Summer Voyage", recounting a solo boat trip down the East Branch from Arkville to Hancock. [2]

The East Branch Delaware River rises in eastern Delaware County, from a small pond next to a gas station on Route 30 just below the divide with the Hudson River watershed southwest of the hamlet of Grand Gorge and flows initially SSW, through the town of Roxbury. Its upper course winds through a narrow valley containing the river and Route 30. Just past the Middletown town line, the river flows through Wawaka Lake and then receives Dry Brook, whose tributaries drain the town of Halcott, the only part of Greene County in the Delaware's watershed, from the east just outside Arkville. This confluence also puts the Catskill Park Blue Line in the middle of the channel.

Route 30 remains parallel as the East Branch returns to the southwest, flowing through the small village of Margaretville, the first significant settlement along the river, where NY 28 joins Route 30. The two roads remain alongside for the next few miles as the East Branch widens into Pepacton Reservoir. A short distance from the north end of the reservoir, Route 28 leaves Route 30 at the former hamlet of Dunraven, cleared to make room for the reservoir.

Pepacton Reservoir continues, with the Blue Line along its north shore, carrying the river through the towns of Andes and Colchester as its course moves more to the west. Route 30 crosses it midway along its length. The Downsville Dam just north of the village of that name marks the reservoir's southern end. Below the dam and its spillway the river narrows again, to where routes 30 and 206 cross just outside the village.

It continues winding through a wider valley alongside Route 30 to East Branch, where the East Branch's most significant tributary, the Beaver Kill, a world-renowned trout stream that rises in western Ulster County, flows in from the east. Here Route 30 ends at the Route 17 expressway, slowly being converted into Interstate 86, parallels the river, crossing back and forth. At the Hancock town line, the Blue Line turns to follow it south, taking the East Branch out of the Catskill Park. A few miles below that, at the village of Hancock, it turns south and joins the West Branch to create the Delaware's main stem.

Not including tributaries of Pepacton Reservoir 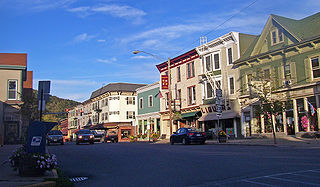 Margaretville is a village in Delaware County, New York, United States. The population was 596 at the 2010 census. The village is in the town of Middletown, on the border of the Catskill Park.

Hancock is a town in Delaware County, New York, United States. The town contains a village, also named Hancock. The town is in the southwest part of the county. The population was 3,224 at the 2010 census.

The Beaver Kill, sometimes written as the Beaverkill or Beaverkill River, is a tributary of the East Branch Delaware River, a main tributary of the Delaware River, approximately 44 miles (71 km) long, in the U.S. State of New York. The kill drains a 300-square-mile (780 km2) area of the Catskill Mountains and has long been celebrated as one of the most famous trout streams in the United States. Its preservation helped establish many of the basic conservation principles of rivers in the United States.

The West Branch Delaware River is one of two branches that form the Delaware River. It is approximately 90 mi (144 km) long, and flows through the U.S. states of New York and Pennsylvania. It winds through a mountainous area of New York in the western Catskill Mountains for most of its course, before joining the East Branch along the northeast border of Pennsylvania with New York. Midway or so it is empounded by the Cannonsville Dam to form the Cannonsville Reservoir, both part of the New York City water supply system for delivering drinking water to the City.

The Neversink River is a 55-mile-long (89 km) tributary of the Delaware River in southeastern New York in the United States. The name of the river comes from the corruption of an Algonquian language phrase meaning "mad river."

Rondout Creek is a 63.3-mile-long (101.9 km) tributary of the Hudson River in Ulster and Sullivan counties, New York, United States. It rises on Rocky Mountain in the eastern Catskills, flows south into Rondout Reservoir, part of New York City's water supply network, then into the valley between the Catskills and the Shawangunk Ridge, where it goes over High Falls and finally out to the Hudson at Kingston, receiving along the way the Wallkill River.

Esopus Creek is a 65.4-mile-long (105.3 km) tributary of the Hudson River that drains the east-central Catskill Mountains of the U.S. state of New York. From its source at Winnisook Lake on the slopes of Slide Mountain, the Catskills' highest peak, it flows across Ulster County to the Hudson at Saugerties. Many tributaries extend its watershed into neighboring Greene County and a small portion of Delaware County. Midway along its length, it is impounded at Olive Bridge to create Ashokan Reservoir, the first of several built in the Catskills as part of New York City's water supply system. Its own flow is supplemented 13 miles (21 km) above the reservoir by the Shandaken Tunnel, which carries water from the city's Schoharie Reservoir into the creek.

The Delaware and Northern Railroad was a small railroad in Delaware County that was founded in 1905, and was planned to go from East Branch, where it would make a connection with the New York, Ontario and Western Railway, to Arkville, where it would connect with the Ulster and Delaware. This line followed close to the banks of the East Branch of the Delaware River, and had plans of expansion, but never made it far, only getting to Arkville. The line was scrapped in 1942, when the Pepacton Reservoir took over its right-of-way, and forced the D&N to go out of business.

New York State Route 30 (NY 30) is a state highway in the central part of New York in the United States. It extends for 300.71 miles (483.95 km) from an interchange with NY 17 in the Southern Tier to the US–Canada border in the state's North Country, where it continues into Quebec as Route 138. On a regional level, the route serves to connect the Catskill Park to the Adirondack Park. In the latter, NY 30 is known as the Adirondack Trail. Aside from the state parks, the route serves the city of Amsterdam and several villages.

New York State Route 206 (NY 206) is a 74.57-mile-long (120.01 km) state highway in the Southern Tier of New York in the United States. It runs through some lightly populated regions along the state's southern border, from Central New York to the Catskills. It begins near a busy intersection with Interstate 81 (I-81) at Whitney Point and runs east from there through Greene. The eastern terminus is located at a junction with NY 17 at Roscoe in Sullivan County. It is one of the longest three-digit routes in New York, and the only long one not associated with a two-digit route or a former U.S. Route. Yet due to its location it sees little traffic, although for much of its length it follows the route of a main 19th century thoroughfare, the Catskill Turnpike. It is primarily a long shortcut around Binghamton.

The Pepacton Reservoir, also known as the Downsville Reservoir, is a reservoir in Delaware County, New York on the East Branch of the Delaware River in the Catskill Mountains of New York. Part of the New York City water supply system, it was formed by the construction of Downsville Dam, and empounds over one-quarter of the East Branch's flow.

Downsville is a hamlet, census-designated place (CDP), and former village in the town of Colchester, Delaware County, New York, United States. The population was 617 at the 2010 census. 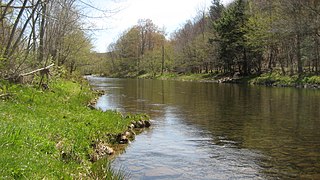 Willowemoc Creek is a tributary of Beaver Kill. It is a popular trout fishing stream near the Catskill Park in Sullivan County, New York.

Arkville is a hamlet in the Town of Middletown, Delaware County, New York, United States. It is located along New York State Route 28 a mile north of the village of Margaretville in the western Catskill Mountains. It has the ZIP code 12406.

Dry Brook may refer to:

Flynn Brook is a river in Delaware County in New York. It flows into the Pepacton Reservoir east of Downsville.

Murphy Hill Brook is a river in Delaware County in New York. It flows into the Pepacton Reservoir east-northeast of Downsville.

Holliday Brook is a river in Delaware County in New York. It flows into the Pepacton Reservoir east-southeast of Downsville.