The Edhi Foundation (Urdu : ایدھی فاؤنڈیشن‎) is a non-profit social welfare program in Pakistan, founded by Abdul Sattar Edhi [2] in 1951. Edhi until his death on 8 July 2016 was the head of the organization and his wife Bilquis, a nurse, oversees the maternity and adoption services of the foundation. Its headquarters are in Karachi, Pakistan.

In 1951 Abdul Sattar Edhi bought a small shop in Mithadar area of Karachi and opened a free dispensary. From that small beginning Edhi has built up the Edhi Foundation. Edhi established his first welfare center in 1957 and then the Edhi Trust. [3] What started as one man operating from a single room in Karachi is now the Edhi Foundation. The foundation has over 300 centers across the country, in big cities, small towns and remote rural areas, providing medical aid, family planning and emergency assistance. They own air ambulances, providing quick access to far-flung areas.

In Karachi alone, the Edhi Foundation runs 8 hospitals providing free medical care, eye hospitals, diabetic centres, surgical units, a 4- bed cancer hospital and mobile dispensaries. In addition to these the Foundation also manages two blood banks in Karachi. As with other Edhi services, employed professionals and volunteers run these. The foundation has a Legal aid department, which provides free services and has secured the release of countless innocent prisoners. Commissioned doctors visit jails on a regular basis and also supply food and other essentials to the inmates. There are 15 " Apna Ghar" ["Our Home"] homes for the destitute children, runaways, and psychotics.

On 25 June 2013, Edhi's kidneys failed; it was announced that he would be on dialysis for the rest of his life unless he found a kidney donor. Edhi died on 8 July 2016 at the age of 88 due to kidney failure after having been placed on a ventilator. His last wishes included the request that his organs were to be donated but due to his ill health, only his corneas were suitable. He was laid to rest at the Edhi Village Karachi.

The foundation also has an education scheme, which apart from teaching reading and writing covers various vocational activities such as driving, pharmacy and para-medical training. The emphasis is on self-sufficiency. The Edhi Foundation has branches in several countries where they provide relief to refugees in the United States, UK, Canada, Japan, and Bangladesh. In 1991 the Foundation provided aid to victims of the Gulf war and earthquake victims in Iran and Egypt. The organization has held the Guinness record for world's "largest volunteer ambulance organization" since 1997. [4] In 2016, after the death of Abdul Sattar Edhi, the state bank of Pakistan urged bank CEOs to donate to the foundation. [5]

The Edhi Foundation provides a number of services, emergency and non-emergency, to the general public. In addition to emergency medical services and private ambulance services, the organization also renders aid to women and children in need, assists with missing persons cases, and helps in covering burial and graveyard costs of unclaimed and unidentified bodies during times of disaster and tragedy. [6]

As of March 2016, the Edhi Foundation owns over 1,800 private ambulance vans stationed in areas across Pakistan. [6] The ambulance dispatchers in Karachi, one of the busiest cities in Pakistan, have reported up to 6,000 calls a day, with the average response time for each incident falling within 10 minutes. [7] It was also an Edhi ambulance which responded to and picked up the body of the American journalist, Daniel Pearl, when he was killed in 2002. [7]

The organization also owns two private jets and one helicopter to assist in moving victims from hard-to-reach locations, especially during the event of a natural disaster. [8] In addition to land and air assistance, Edhi Foundation also hosts 28 rescue boats to aid during floods and in cases of shipwrecks and disaster along the Arabian Ocean coast. [9]

Bilquis Edhi, co-head of the Edhi Foundation, is responsible for overseeing children's and women's services within the organization. Services she heads currently for children include the jhoola project, a child adoption center, and an abandoned children's welfare center. Jhoola is the Urdu word for "cradle", [10] and refers to a baby hatch for abandoned children. Most of the Edhi emergency centers have a jhoola located outside the venue for mothers to leave their infants, regardless of the current situation they may be in. [11] These children are taken into custody and are taken care of, often being adopted by pre-screened families.

The Edhi Foundation has reached out to international communities and assisted with the setup of several offices overseas which assist with donations, fundraising, and especially financially aiding Pakistanis who have to be flown overseas for urgent medical attention.[ citation needed ] In addition to providing their regular services, the overseas foundation offices often help with community needs as necessary. In 2005, the Edhi Foundation provided $100,000 in aid to relief efforts following Hurricane Katrina. [7]

In March 2020, the organization donated US$200,000 to the Iranian government to help it combat the Coronavirus epidemic plaguing the country. [12] 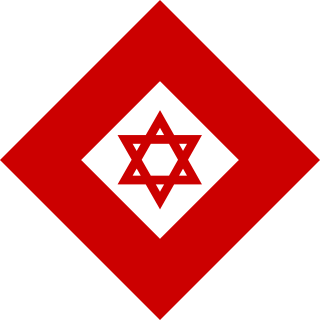 The Magen David Adom is Israel's national emergency medical, disaster, ambulance and blood bank service. The name means "Red Shield of David". Since June 2006, Magen David Adom has been officially recognized by the International Committee of the Red Cross (ICRC) as the national aid society of the State of Israel under the Geneva Conventions, and a member of the International Federation of Red Cross and Red Crescent Societies. MDA has a dedicated medical emergency phone number in Israel, 101.

Abdul Sattar Edhi was a Pakistani philanthropist, ascetic, and humanitarian who founded the Edhi Foundation, which runs the world's largest volunteer ambulance network, along with various homeless shelters, animal shelters, rehabilitation centres, and orphanages across Pakistan. Following his death, his son Faisal Edhi took over as head of the Edhi Foundation.

Bilquis Bano Edhi, widow of Abdul Sattar Edhi, is a professional nurse and one of the most active philanthropists in Pakistan along with serving as co-chair of Edhi Foundation. She has been named The Mother of Pakistan. She was born in 1947 in Bantva. She heads the Edhi Foundation, and with her husband received the 1986 Ramon Magsaysay Award for Public Service. In 2015, she received the Mother Teresa Memorial International Award for Social Justice. Her charity runs many services in Pakistan including a hospital and emergency service in Karachi. Together with her husband their charity has saved over 16,000 unwanted babies. Her husband, Abdul Sattar Edhi, died on 8 July 2016.

In the international response to the 2005 Kashmir earthquake many countries, international organizations and non-governmental organizations offered relief aid to the affected regions. The aid given was in the form of monetary donations and pledges, as well as relief supplies including food, medical supplies, tents and blankets. Rescue and relief workers were sent from different parts of the world to the region and they brought along rescue equipment, including helicopters and rescue dogs. After the earthquake, 3.3 million were homeless and 80,000 to 100,00 were dead

Tehmina Durrani is a Pakistani author, artist, and activist on women's and children's rights. Her first book, "My Feudal Lord" (1991), shocked the conservative Pakistani society because of the sensational exposure of her politically famous but abusive husband, Mustafa Khar.

Bantva or Bantwa, is a small town in Saurashtra region of the state of Gujarat in India.

The humanitarian responses by non-governmental organizations to the 2010 Haiti earthquake included many organisations, such as international, religious, and regionally based NGOs, which immediately pledged support in the aftermath of the 2010 Haiti earthquake. Besides a large multi-contingency contribution by national governments, NGOs contributed significantly to both on-the-ground rescue efforts and external solicitation of aid for the rescue efforts.

The Sindh Institute of Urology & Transplantation (SIUT) is a dialysis & kidney transplant centre located in Pakistan. SIUT was founded by Dr. Adibul Hasan Rizvi and it is Pakistan's largest kidney disease center, as well as Pakistan's largest public sector health organisation. It began as a department of urology at the government-run Civil Hospital in 1970 and became autonomous in 1991. 10-12 transplants are performed weekly, and in 2003 doctors at SIUT performed Pakistan's first liver transplant. In 2004, a child care unit was opened.

PAWS is a non profit organization registered as a company limited founded in 2004. It is run by volunteers, without having a specific shelter, business venue or paid staff located in Karachi, Pakistan. All funds raised go directly towards rescuing and treating animals as well as awareness raising and advocacy work. PAWS accounts are audited annually by chartered accountants Salman Masud and Co.

The Nasreen and Alam Sher Foundation, was started in February 2007, and is a United States-based organization with one major goal: to help those in need. Since its inception, the NASF has expanded in members and support worldwide. It is an organization run completely non-governmental, non-religious, non-political, and non-profit. Recognized by the United Nations, this organization was created to promote health, education, humanities, and peace in South Asian countries and beyond. The emphasis remains on human development, freedom, human rights, quality and equality of the lives of ordinary people.

Chhipa Welfare Association, commonly known as Chhipa, is a Pakistani non-profit welfare organization founded in 2007 by Ramzan Chhipa. It is headquartered in Karachi, Pakistan.

These Birds Walk is a 2013 documentary film directed by Omar Mullick and Bassam Tariq that follows the life of a runaway boy in Pakistan as well as the humanitarian efforts of Abdul Sattar Edhi.

Jafaria Disaster Management Cell (JDC) a Welfare and Non-Governmental Organization (NGO) commonly known as JDC Welfare Org was established in 2009 by Syed Shehanshah Hussain Naqvi and some like minded youths of Karachi. Sibt-e-Jaafar Zaidi was also one of its founding members, he stayed an active member of JDC until his assassination in March of 2013. JDC welcomes volunteers from all walks of life and it prides itself in not discriminating members based on their beliefs, political or social background. Rehabilitation activities and medical emergency services by JDC mainly cover Sindh Province and some other areas of Pakistan with its policy that where there is a victim of any disaster he/she should be helped simply on humanitarian aspect without discrimination. 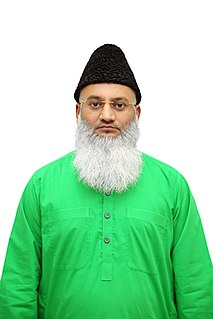 Muhammad Ramzan Chhipa(Urdu: محمد رمضان چھیپا‎), Sitara-e-Imtiaz Award, is a Pakistani philanthropist and social worker based in Karachi, Pakistan. He is the founder of Chhipa Welfare Association, an NGO in Pakistan known for its social work and the second largest fleet of ambulances after Edhi Foundation around the country.

The Aman Foundation is a not for profit trust, based in Karachi, Pakistan, focused on catalyzing impactful solutions in Health and Education through direct interventions, convening powerful partnerships and advocating on behalf of the underserved people of Pakistan. A social impact enterprise with an entrepreneurial mindset and a humanitarian heart, The Aman Foundation was founded in 2008, with a contribution of USD 100 million by Mr Arif and Ms Fayeeza Naqvi, with the aim of giving fellow Pakistanis healthcare support and skills to reshape their lives and redirect their destinies. A local, not-for-profit trust, the foundation aspires to improve healthcare and education/skills through its direct interventions and supporting a number of high-impact organizations through its grant-giving initiative.

The Abdul Sattar Edhi Line, formally named the Orange Line is a 3.9 km (2.4 mi) bus rapid transit line of the Karachi Metrobus under-construction in Karachi, Sindh, Pakistan. The expected daily ridership is estimated at 50,000 with a total of 10.9 km of dedicated bus routes in 2022 Board office to Gulshan-e-Zia After completing This orange line project will have the capacity to carry up to 20,00,000 passengers daily

Aamin Ambulance is a 24 hour, free ambulance service in Mogadishu – the only one of its kind.

Emergency medical services (EMS) in Pakistan are provided both by the government and private sector, with the latter being main a payment-for-service system. Healthcare falls under the responsibility of provincial governments, except for in the federally administered territories.