Though the settlement is now home to only a few residents, it was formerly larger, and between 1905 and the 1970s served as the terminus of the Tapanui Branch railway. With the closure of that line due to repeated flooding, the settlement dwindled to its current size.

Raes Junction is a small settlement in New Zealand, located at the intersection of State Highways 8 and 90, in the lower South Island. The highways which meet at the junction are the main routes to the Clutha valley for travellers from Dunedin and Invercargill respectively.

West Otago is the local name given to part of the region of Otago, New Zealand, lying close to the border with Southland. It is administratively connected to South Otago, but is geographically separated from it by a range of hills known as the Blue Mountains. The largest settlements in West Otago are Tapanui and Heriot, and other localities within the area include Moa Flat, Edievale, Merino Downs, and Waikoikoi. The area described as West Otago is sometimes extended to include Lawrence, Clinton, and Beaumont. The ghost town of Kelso also lies within West Otago. Other notable features of the area include Conical Hill and Landslip Hill, the latter being a major fossil-bearing formation.

Brzeźno is a village in the administrative district of Gmina Prusice, within Trzebnica County, Lower Silesian Voivodeship, in south-western Poland.

Ballenger Creek is a 10.7-mile-long (17.2 km) tributary of the Monocacy River in Frederick County, Maryland. The headwaters of the creek are located on the east slope of Catoctin Mountain, about 3 miles (5 km) west of the city of Frederick. The stream runs roughly southeast to the Monocacy National Battlefield and the confluence with the Monocacy River, which drains to the Potomac River. The watershed area of the creek is 21.8 square miles (56 km2).

Mamyan ممیان is a village located 20 km south-west of Jhelum, 3 km West of River Jhelum and 0.5 km North of River Bunhar in Pakistan.

Nasutów is a village in the administrative district of Gmina Niemce, within Lublin County, Lublin Voivodeship, in eastern Poland. It lies approximately 7 kilometres (4 mi) west of Niemce and 14 km (9 mi) north of the regional capital Lublin.

Restarzew Cmentarny is a village in the administrative district of Gmina Widawa, within Łask County, Łódź Voivodeship, in central Poland. It lies approximately 11 kilometres (7 mi) south-east of Widawa, 26 km (16 mi) south of Łask, and 56 km (35 mi) south-west of the regional capital Łódź.

Kurzyna Średnia is a village in the administrative district of Gmina Ulanów, within Nisko County, Subcarpathian Voivodeship, in south-eastern Poland. It lies approximately 7 kilometres (4 mi) east of Ulanów, 17 km (11 mi) east of Nisko, and 59 km (37 mi) north-east of the regional capital Rzeszów.

Holendry is a village in the administrative district of Gmina Wilga, within Garwolin County, Masovian Voivodeship, in east-central Poland. It lies approximately 20 kilometres (12 mi) west of Garwolin and 50 km (31 mi) south-east of Warsaw.

Nellie is an Oyster Sloop located at Mystic Seaport in Mystic, Connecticut, United States. Nellie was built in 1891 in Smithtown, New York and was used for oyster dredging in Long Island Sound. Mystic Seaport acquired her in 1964 to add to their collection of watercraft.

Sławutówko is a village in the administrative district of Gmina Puck, within Puck County, Pomeranian Voivodeship, in northern Poland. It lies approximately 5 kilometres (3 mi) south-west of Puck and 38 km (24 mi) north-west of the regional capital Gdańsk.

Zdroje is a settlement in the administrative district of Gmina Markusy, within Elbląg County, Warmian-Masurian Voivodeship, in northern Poland. It lies approximately 2 kilometres (1 mi) west of Markusy, 7 km (4 mi) south-west of Elbląg, and 81 km (50 mi) west of the regional capital Olsztyn.

Siemidarżno is a village in the administrative district of Gmina Trzebiatów, within Gryfice County, West Pomeranian Voivodeship, in north-western Poland. It lies approximately 7 kilometres (4 mi) south-east of Trzebiatów, 17 km (11 mi) north-east of Gryfice, and 86 km (53 mi) north-east of the regional capital Szczecin.

Kurów is a village in the administrative district of Gmina Kołbaskowo, within Police County, West Pomeranian Voivodeship, in north-western Poland, close to the German border. It lies approximately 20 kilometres (12 mi) south of Police and 9 km (6 mi) south-west of the regional capital Szczecin.

Tarner Island is a triangular shaped island in Loch Bracadale just off the coast off the Harlosh peninsula of Skye in Scotland. It is about 28 hectares in extent. 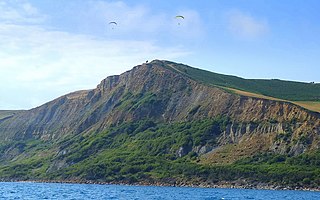 Thorncombe Beacon is a hill situated between Bridport and Charmouth in Dorset, England. It lies about 1 km west of Eype Mouth and 2 km east of Seatown. It is in the very south-west part of Symondsbury parish close to the parish of Chideock. It lies close to the South West Coast Path and the Monarch's Way, which skirt the hilltop. It is 157m high, compared to 191m for Golden Cap which lies about 3 km to the west.

Spoluka Point is the ice-covered point on the southwest side of the entrance to Odrin Bay on Nordenskjöld Coast in Graham Land. It was formed as a result of the retreat of the glacier featuring Arrol Icefall in the early 21st century. The feature is named after the settlement of Spoluka in Southern Bulgaria.

Watson's Ferry was a former settlement, river ferry and steamboat landing on Fresno Slough near its confluence with the San Joaquin River nearby to the northeast of modern Mendota in what is now Fresno County, California. Watson's Ferry was located 8 miles southeast of Firebaugh.

Becks is a small settlement in the Otago Region of the South Island of New Zealand. It is located on State Highway 85, some 16 kilometres (9.9 mi) north-east of Omakau, and just west of where the State Highway crosses the Manuherikia River. It lies on the 45th parallel south.

Köprüağzı station is a train station in Turkey.It is located at 37°21′45″N37°0′2″E in Türkoğlu ilçe (district) of Kahramanmaraş Province. It is a junction point of the main east to west railway and a spur line to Kahramanmaraş. In addition to freight trains main passenger train is Fırat Express (Adana-Elazığ) train.