Edinburgh Island is an island located within Coronation Gulf, south of Victoria Island, in the Kitikmeot Region, Nunavut, Canada. It is approximately 103 m (338 ft) above sea level. [3]

The Strait of Juan de Fuca is a body of water about 96 miles long that is the Salish Sea's outlet to the Pacific Ocean. The international boundary between Canada and the United States runs down the centre of the Strait.

The English Montreal School Board is one of five public school boards on the island of Montreal. 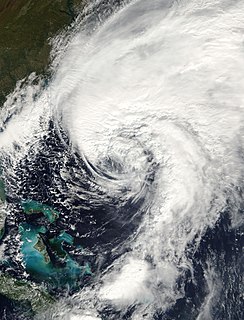 Hurricane Noel was a deadly and very damaging tropical cyclone that carved a path of destruction across the Atlantic Ocean from the Caribbean Sea to Newfoundland in late October 2007. The sixteenth tropical depression, fourteenth named storm, and the sixth hurricane of the 2007 Atlantic hurricane season, Noel formed on October 27 from the interaction between a tropical wave and an upper-level low in the north-central Caribbean. It strengthened to winds of 60 mph (97 km/h) before making landfall on western Haiti and the north coast of eastern Cuba. Noel turned northward, and on November 1, it attained hurricane status. The hurricane accelerated northeastward after crossing the Bahamas, and on November 2, it transitioned into an extratropical cyclone. 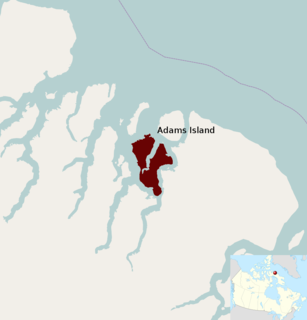 Adams Island is an uninhabited island in the Qikiqtaaluk Region of Nunavut, Canada. The island is located in Baffin Bay off the northeastern coast of Baffin Island in the Arctic Archipelago. Nearby are Dexterity Island (northeast), Dexterity Fiord and Baffin Island (east), Tromso Fiord (south), Paterson Inlet (west), Bergesen Island (northwest), and Isbjorn Strait (north).

Nanukton Island is an island located within Coronation Gulf, south of Victoria Island, in the Kitikmeot Region, Nunavut, Canada. It is situated at an elevation of 30 m (98 ft) above sea level. 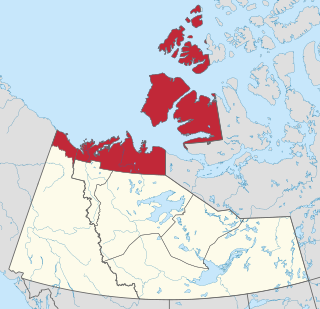 Kingak Island is an island located within Coronation Gulf, south of Victoria Island, in the Kitikmeot Region, Nunavut, Canada. Its highest point is 40 m (130 ft) above sea level.

Takhoalok Island is an island located within Coronation Gulf, south of Victoria Island, in the Kitikmeot Region, Nunavut, Canada. Its highest point is 48 m (157 ft) above sea level.

Doak Island is an island located within Coronation Gulf, south of Victoria Island, in the Kitikmeot Region, Nunavut, Canada. It is approximately 4 m (13 ft) above sea level.

The uninhabited Cheyne Islands are members of the Queen Elizabeth Islands and the Arctic Archipelago in the Qikiqtaaluk Region of Nunavut, Canada. The group is made up of three islands known as North Island, Middle Island, and South Island. Located approximately 5 km (3.1 mi) off eastern Bathurst Island, they are situated near Reindeer Bay within western Penny Strait.

Putulik formerly Hat Island is a small uninhabited island located in the Kitikmeot of Nunavut, Canada. The island is situated in Victoria Strait approximately 110 km (68 mi) southeast of Victoria Island and 80 km (50 mi) southwest of King William Island. The Requisite Channel separates Hat Island from Amundsen Island, the larger of the Nordenskiöld Islands.

The Faculty of Medicine and Dentistry at University of Alberta is located in Edmonton, Alberta, Canada. Established in 1913, it is one of the oldest medical schools in Western Canada and is composed of 21 departments, two stand-alone divisions, 9 research groups, and 24 research centers and institutes. Educational, clinical and research activities are conducted in 29 buildings on or near the University of Alberta north campus.

The 2012 Haida Gwaii earthquake occurred just after 8:04 p.m. PDT on October 27. The shock had a moment magnitude of 7.8 and a maximum Mercalli Intensity of V (Moderate). The earthquake's epicentre was on Moresby Island of the Haida Gwaii archipelago. This was the second largest Canadian earthquake ever recorded by a seismometer, after the 1949 Queen Charlotte Islands earthquake, about 135 kilometres (84 mi) away. One person died due to a car crash related to the tsunami in Oahu, Hawaii. 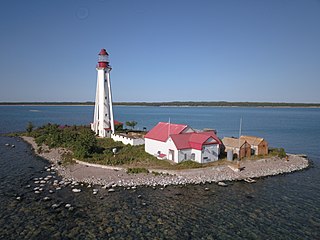 Caribou Island Lighthouse sits on the uninhabited Caribou Island in the eastern end of Lake Superior, 22 miles (35 km) south of Michipicoten Island. It lies entirely within the territorial waters of Canada although only about three miles from the international border between Canada and the United States. It is approximately 3 miles (4.8 km) long and approximately 1 mile (1.6 km) wide.