The Hiroshima Big Arch (広島ビッグアーチ, Hiroshima Biggu Āchi), known under current sponsorship as EDION Stadium Hiroshima (エディオンスタジアム広島, Edion Sutajiamu Hiroshima), is a multi-purpose stadium in Hiroshima, Japan. It used mostly for association football matches and also for athletics. The venue is the home of J. League club Sanfrecce Hiroshima. It has a capacity of 36,894. It is an all-seater. It was formerly known as Hiroshima Park Stadium.

Hiroshima Big Arch opened in 1992, as the venue of 1992 AFC Asian Cup. The host nation Japan won the Asian Cup title for the first time, after defeating the defending champion Saudi Arabia 1–0 in the final at this stadium.

The stadium hosted the 1994 Asian Games.

The stadium is accessible via train services, with the Kōiki-kōen-mae Station on the Astram Line located only 5 minutes' walk from the stadium.

Hiroshima is the capital of Hiroshima Prefecture in Japan. As of June 1, 2019, the city had an estimated population of 1,199,391. The gross domestic product (GDP) in Greater Hiroshima, Hiroshima Urban Employment Area, was US $61.3 billion as of 2010. Kazumi Matsui has been the city's mayor since April 2011. 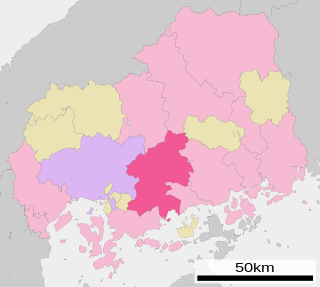 Higashihiroshima is a city located in Hiroshima Prefecture, Japan.

The 1992 AFC Asian Cup was the 10th edition of the men's AFC Asian Cup, a quadrennial international football tournament organised by the Asian Football Confederation (AFC). The finals were held in Hiroshima Prefecture, Japan between 29 October and 8 November 1992. The host nation, Japan, defeated the defending champion Saudi Arabia in the final in Hiroshima.

Hiroshima New Transit Line 1, also known as the Astram Line, is a rubber-tired transit system operated by Hiroshima Rapid Transit in Hiroshima, Japan. Astram opened August 20, 1994, for the 1994 Asian Games in Hiroshima. The line connects central Hiroshima and Hiroshima Big Arch, which was the main stadium of the Asian Games. On March 14, 2015, a new station, Shin-Hakushima, opened to make a new connection between the Astram Line and JR lines.

Coca-Cola West Hiroshima Stadium is a multi-purpose stadium in Hiroshima, Japan. It is currently used mostly for football matches and was the home stadium of Sanfrecce Hiroshima until 1995. The stadium holds 13,800 people.

Bingo Stadium (広島県立びんご運動公園陸上競技場) is a multi-use stadium in Onomichi, Hiroshima, Japan. It is currently used mostly for football matches and was used as a venue for the 1992 AFC Asian Cup. The stadium has a capacity of 10,000 people. 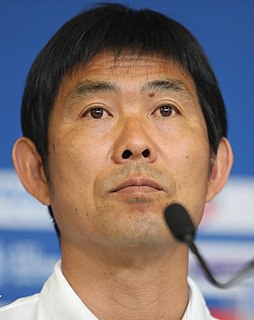 Hajime Moriyasu is a Japanese football manager and former player. He made more than 250 appearances in 14 years with Sanfrecce Hiroshima, including a year on loan to Kyoto Purple Sanga, before spending his final season as a professional with Vegalta Sendai. He also played 35 times for the Japan national team. His brother Hiroshi and his sons Shohei and Keigo are also footballers. He is current manager of Japan senior and olympic teams.

Gakuto Notsuda is a Japanese football player who plays as a midfielder for Sanfrecce Hiroshima. He has also represented Japan at under-17, under-20, and under-22 level.

The 2014 J.League Cup, also known as the 2014 Yamazaki Nabisco Cup for sponsoring purposes, is the 39th edition of the most prestigious Japanese soccer league cup tournament and the 22nd edition under the current J.League Cup format.

Koki Oshima is a Japanese footballer who plays for Tochigi SC.

Tsukasa Morishima is a Japanese footballer who plays for Sanfrecce Hiroshima.

The 2019 Sanfrecce Hiroshima season involves the team competing in the J1 League, they finished runners-up in the 2018 J1 League. They will also compete in the J.League Cup, Emperor's Cup, and AFC Champions League.

Yuya Asano is a Japanese professional footballer who plays as a midfielder for Sanfrecce Hiroshima.