Edmund Knox (1772 – 3 May 1849) was an absentee Irish bishop in the mid 19th century whose death at the height of the Irish Famine lead to a famously critical leading article in The Times. [1]

He was born in 1772, the 7th and youngest son of Thomas Knox, 1st Viscount Northland and educated at Trinity College, Dublin. He was Dean of Down from 1817 [2] to his elevation to the episcopate as Bishop of Killaloe and Kilfenora in 1831. [3] Translated to become Bishop of Limerick, Ardfert and Aghadoe in 1834 [4] he died in post on 3 May 1849.

Charles Thornton Primrose Grierson was an eminent Irish clergyman in the first third of the 20th century. Gaining an MA, then ordained in 1881, he began his career with a curacy at Kells, after which he was Rector of Stradbally and then Seapatrick, County Down. Promotion to be Dean of St Anne’s Cathedral, Belfast followed; after which he was elevated to the episcopate as the Bishop of Down, Connor and Dromore. Works. He contributed to the monumental "Dictionary of Christ and the Gospels" 1908 edited by Hastings.

James Bennett Keene was an Irish Anglican bishop in the Church of Ireland in the late 19th and early 20th centuries.

William Pakenham Walsh was a 19th-century Anglican priest and author. 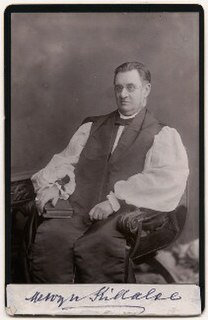 William Bennett Chester was a Church of Ireland bishop and author. Educated at Trinity College, Dublin, he was ordained in 1848. After a curacy in Kilrush he held incumbencies at Killead, Kilkee, Ballymackey, Nenagh and Birr. He was Chancellor then Archdeacon of Killaloe before his elevation to the episcopate in 1884. He died in post on 27 August 1893.

Christopher Butson was a Church of Ireland bishop in the first half of the 19th century.

William Higgin was the 18th Bishop of Limerick, Ardfert and Aghadoe from 1849 until 1843, when he was translated to Derry and Raphoe.

Robert Ponsonby Tottenham was an Irish Anglican Bishop in the first half of the 19th century.

Nathaniel Alexander, was an Anglican bishop in Ireland during the first half of the 19th century.

Thomas Stewart Townsend (1800–1852) was an Irish Anglican bishop in the Church of Ireland in the 19th century.

Richard Francis Onslow was Archdeacon of Worcester from 1815 to 1849.

Samuel Adams was an Irish Anglican priest in the 19th century.