Sir Edmund Walsingham (c. 1480 – 10 February 1550) of Scadbury Hall, Chislehurst in Kent, was a soldier, Member of Parliament, and Lieutenant of the Tower of London during the reign of King Henry VIII.

He was the eldest son and heir of James Walsingham (1462-1540) of Scadbury by his wife Eleanor Writtle (pre-1465 - post-1540), the daughter and heiress of Walter Writtle of Bobbingworth in Essex. [2] Sir Edmund, according to a monumental brass formerly in the church at Scadbury, had three brothers and seven sisters, including: [3] [4]

Although the Walsingham pedigree is said to date to the thirteenth century, the family is first recorded in the County of Kent in 1424, when Thomas I Walsingham purchased the manor of Scadbury. The descent was as follows:

Walsingham entered the service of Thomas Howard, Earl of Surrey (later 3rd Duke of Norfolk), and was knighted by him on 13 September 1513, four days after the decisive English victory over the Scots at the Battle of Flodden, in which the English army was commanded by Surrey's father Thomas Howard, 2nd Duke of Norfolk. In 1520 he was part of the Kent contingent accompanying King Henry VIII at the Field of the Cloth of Gold in Calais in June, and at the King's meeting with the Emperor Charles V at Gravelines in July.

In 1521 he was appointed a sewer in the royal household, was made a freeman of the Worshipful Company of Mercers, was on the jury which tried and convicted Edward Stafford, 3rd Duke of Buckingham, [2] and succeeded Sir Richard Cholmondeley as Lieutenant of the Tower of London at a salary of £100 a year. He held the office until Henry VIII's death in 1547, [19] residing in a house at the Tower, and taking personal charge of prisoners of state, among them Margaret Pole, Countess of Salisbury, Catherine Howard, Henry Courtenay, 1st Marquess of Exeter, Henry Pole, 1st Baron Montagu, Agnes Howard, Duchess of Norfolk, Arthur Plantagenet, 1st Viscount Lisle, Anne Boleyn, Bishop John Fisher and Sir Thomas More. [20] [21] [22] It was to Walsingham that More made his jest on ascending the scaffold, "I pray you, Master Lieutenant, see me safe up, and for my coming down, let me shift for myself". [2] [23]

In the 1530s Walsingham acquired long-term leases of the manors of Tyting in Surrey and Stanground in Huntingdonshire, and in 1543 purchased the manors of Swanton Court, West Peckham and Yokes near Scadbury from Sir Robert Southwell. In 1539, after the Dissolution of the Monasteries, the king granted him nine houses in London, former monastic property. [21] [24]

Firstly he married Katherine Gounter (or Gunter) (before 1495 – c. 1526), widow of Henry Morgan of Pencoed, Monmouthshire, and a daughter of John Gounter of Chilworth, Surrey, by his wife Elizabeth Attworth (or Utworth), a daughter and heiress of William Attworth, [20] by whom he had four sons and four daughters: [2] [26] [27] [28]

Walsingham died on 9 February 1550 and was buried in "a table tomb, richly ornamented with roses, acorns and foliage gilt" [44] in the Scadbury chapel in the church of St Nicholas at Chislehurst. [45] His son and heir, Thomas Walsingham, erected a monument to his memory in 1581; the inscription begins: [20] [46]

A knight sometime of worthy fame, Lieth buried under this stony bower, Sir Edmund Walsingham was his name, Lieutenant he was of London Tower.

Sir Robert Drury (1456–1536) was an English knight, Lord of the Manor of Hawstead, Suffolk, and Knight of the Body to Kings Henry VII and Henry VIII. As a politician he was Knight of the Shire for Suffolk, Speaker of the House of Commons, and Privy Councillor. He was also a barrister-at-law. His London townhouse was in Drury Lane.

Sir Robert Rochester KG was an English Catholic and Comptroller of the Household and a member of the Privy Council in the reign of Mary I.

Sir Henry Jerningham KB was an English courtier during the Tudor period. He was a Gentleman Pensioner during the reign of Henry VIII. In the succession crisis of 1553 he was one of the foremost supporters of Mary Tudor, and after her accession was one of her most trusted servants, being appointed Vice-Chamberlain of the Household, Captain of the Yeomen of the Guard, and a member of the Privy Council.

William Ayloffe, was an English justice of the Queen's Bench.

Thomas Walsingham was an English politician.

Henry Barley or Barlee, of Albury, Hertfordshire, was a Member of Parliament during the Tudor period.

Sir Richard Jerningham was a soldier and diplomat in the service of King Henry VIII.

Sir John Shaa or Shaw was a London goldsmith. He served as engraver and later joint Master of the Mint, and as Sheriff and Lord Mayor of London. While Lord Mayor he entertained ambassadors from Scotland, and was among those who welcomed Catherine of Aragon to England. He is mentioned in a poem by William Dunbar.

Thomas Walsingham was a wealthy wine and cloth merchant in the City of London who served as a Member of Parliament for Wareham in 1410 and for Lyme Regis in 1413, both in Dorset. 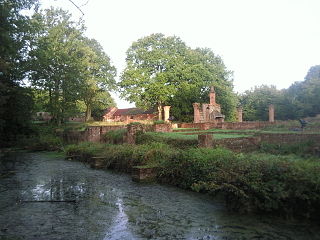 Scadbury is a historic manor in the parish of Chislehurst in Kent, England. Much of the estate is preserved today as Scadbury Park, a 300-acre Local Nature Reserve and a Site of Metropolitan Importance for Nature Conservation. The manorial chapel, known as the Scadbury Chapel, survives in the church of St Nicholas at Chislehurst, and served as a burial place for owners of the estate, including members of the Walsingham family.