Last updated June 20, 2021
In this Eastern Slavic naming convention, the patronymic is Vassilievichand the family name is Malofeyev.

Despite being born and grown in Russian SFSR, Malofeyev rose to prominence in Belarus, having scored over 100 goals in Soviet Top League for Dinamo Minsk. He is widely regarded as one of the best Belarusian coaches in history as he led Dinamo Minsk to the team's only Soviet champions title, and coached Belarus national football team in one of their most successful major competition qualifying campaigns.

As a coach, Malofeyev led Dinamo Minsk to the championship in the Soviet Top League in 1982. In 1984–1986 he was the head coach for USSR. With Malofeyev at the helm, the Soviet national team qualified for the 1986 World Cup but he was fired shortly before the World Cup started in favor of Valeri Lobanovsky. He also coached the Belarus national football team from 2000 to 2003.

Malofeyev's trademark was what he called "sincere football," characterized by passion for the game and attacking style. It was in sharp contrast to the pragmatic, analytical approach favored by Valeri Lobanovsky.

Between 2004 and 2007 he worked in all three clubs associated with Vladimir Romanov's holding (Belarusian MTZ-RIPO Minsk, Lithuanian FBK Kaunas and Scottish Hearts [3] ) at various coaching and administrative positions.

In later years he had coached Dynamo St. Petersburg (whom he led to promotion to the Russian First Division in 2009 [4] ), Shakhtyor Soligorsk and Pskov-747.

Sergei Yevgenyevich Aleinikov is a Belarusian and Soviet former professional footballer, and currently a coach. He primarily played as a defensive midfielder and was known for his stamina, intelligence, solid technique, tactical sense, and passing ability. He also played in defence as a sweeper or centre-back.

The 1993 Commonwealth of Independent States Cup was the first edition of the competition between the champions of former republics of Soviet Union. It was won by Spartak Moscow who defeated Belarusian side Belarus Minsk in the final. 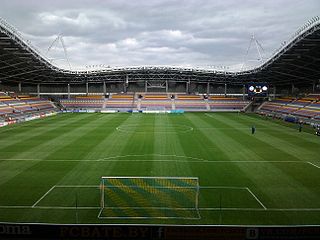 In Belarus, a country that gained independence in 1991, football is the most popular sport, closely followed by ice hockey. The national association takes part in all competitions organized by FIFA and UEFA at senior and youth level, as well as in women’s football. 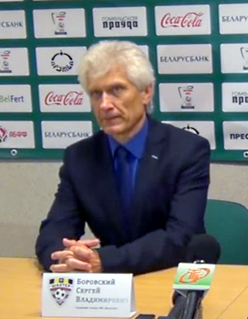 Heorhiy Pyatrovich Kandratsyew commonly referred to in English as Georgi Petrovich Kondratiev is a Belarusian football coach and former Belarusian and Soviet footballer. From 2011 to 2014 he was in charge of Belarus national team. In 2018, he managed Belshina Bobruisk.

Andrey Anatolyevich Satsunkevich is a Belarusian professional football coach and a former player. Since 2008 he works as a goalkeeper coach in Belarus national football team.

Eduard Demenkovets is a retired Belarusian professional footballer and Belarus international. His playing career suffered in late 2000 as a result of car crash he was involved in. He retired after playing several more seasons in lower leagues. Since 2007 he works as a head coach for women's club Gomel-SDYUShOR-8.