Eduard Nikolayevich Uspensky (Russian : Эдуард Николаевич Успенский; 22 December 1937 – 14 August 2018) was a Russian children's writer and poet, author of over 70 books, as well as a playwright, screenwriter and TV presenter. His works have been translated into 25 languages and spawned around 60 cartoon adaptations. [1] [2] Among the characters he created are Cheburashka and Crocodile Gena, Uncle Fyodor and Kolobki brothers. He was awarded IV Class Order "For Merit to the Fatherland" in 1997.

Uspensky was born in Yegoryevsk, in Moscow Oblast into a Russian family. [3] His father Nikolai Mikhailovich Uspensky came from the city of Yelets and was a distant relative of Tikhon Khrennikov. He served as a high-ranking official in the Central Committee of the Communist Party of the Soviet Union. Eduard's mother Natalia Alexeevna Uspenskaya (nee Dzurova) was an engineering technologist from Vyshny Volochyok. She came from a merchantry social estate. Her paternal ancestors were Poles who were resettled in Russia after one of the Polish uprisings. [4] [5]

In 1941 with the start of the war the family was evacuated to Siberia where they spent two years. They returned to Moscow later on. After graduating as an engineer, Uspensky earned his living by writing and producing animations.

Besides writing and producing, Uspensky has enjoyed a professional role as a long-lasting figure in radio and television. He was among the founders of the longest-running Russian children's TV show Good Night, Little Ones! [6] and the popular radio programme Radio Nanny produced with the aim of featuring songs and humorous dialogue as integral elements of an educational radio programme explaining concepts in grammar, mathematics, scientific subjects, and courteous behaviour to children.

From 1991 to 2016 he hosted the musical TV and radio talk show Ships Used to Enter Our Harbour where he and his guests recollected the so-called street folklore, which included Russian chanson and blatnaya pesnya. The songs were performed by both professional and amateur singers, politicians, actors and people of various occupations. [7]

Uspensky died of cancer on 14 August 2018 in his country house (Puchkovo village, part of Moscow's Troitsky Administrative Okrug). [8] He was buried at the Troyekurovskoye Cemetery, plot 21.

Uspensky's first book about Uncle Fyodor, Uncle Fyodor, His Dog and His Cat , was first published in Russian in 1974. The main character is a six-year-old boy who is referred to as 'Uncle Fyodor' because he appears serious-minded, self-reliant and responsible. After his parents don't let him keep Matroskin, a talking cat, Uncle Fyodor leaves his home. With the dog Sharik, the three set up a home in the country, a village called Prostokvashino (Простоквашино, from the Russian for buttermilk, Простоквашa). After finding a treasure, Uncle Fyodor can afford to buy a tractor that runs on soup and potatoes, and a portable sun to do the heating during the winter. The book was made into a successful animated film, Three from Prostokvashino (and its two sequels). Uspensky continued with Uncle Fyodor in other books, which have not, however, been as successful.[ citation needed ] Uspensky published other books with human-like animal characters.

Cheburashka, also known as Topple in earlier English translations, is a character in children's literature, from a 1966 story by Soviet writer Eduard Uspensky. He is also the protagonist of the stop-motion animated films by Roman Kachanov, the first film of which was made in 1969, with songs composed by Vladimir Shainsky. 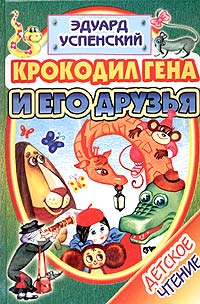 Shapoklyak was a popular villain from a story about Cheburashka written by Russian writer Eduard Uspensky. The first appearance of Shapoklyak was in the animated film Gena the Crocodile (1969) by Roman Kachanov. 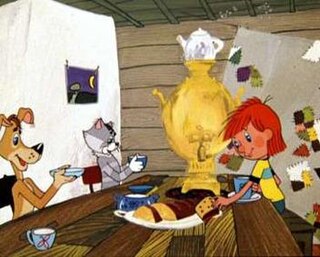 Uspensky, or Uspenskaya is an east-european surname that may refer to:

Vladimir Yakovlevich Shainsky was a Soviet and Russian composer.

Aleksander Mihailovich Tatarskiy was a Soviet and Russian animation director, screenwriter, animator, producer and artist, co-founder and artistic director of the Pilot studio. An Honored Artist of Russia (2000). Laureate of the State Prize of the Russian Federation in literature and arts (1998).

Shapoklyak is a 1974 Soviet Russian animated film by Roman Kachanov.

Cheburashka Goes to School is a 1983 Soviet animated film directed by Roman Kachanov. 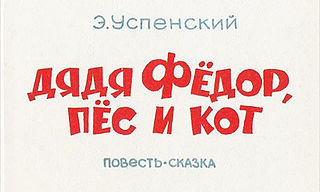 Uncle Fedya, His Dog, and His Cat is a children's novella written by Eduard Uspensky and first published in 1974. It is the first story in the series set in the fictional village of Milkville created by Uspensky. The series features a city boy named Fyodor, or Fedya for short, and his friends, the talking animals. The stories focus on their adventures in Prostokvashino and their relationships with its residents, including the irritable postman Pechkin.

Vladimir Ivanovich Popov was a Soviet animator and art director. A member of ASIFA. He was named Honoured Artist of the RSFSR in 1986.

Gennady Mikhailovich Sokolsky was a Soviet and Russian artist, animation director, animator, art director and screenwriter at Soyuzmultfilm. Sokolsky took part in over 170 projects, including the Happy Merry-Go-Round animated series which he co-created with several friends. Member of ASIFA.