Edward Cedric Hardwicke (7 August 1932 – 16 May 2011) [1] [2] was an English actor, who had a distinguished career on the stage, as well as being known for his portrayal of Dr. Watson in the Granada TV series Sherlock Holmes .

Hardwicke was born in London, England, the son of actors Sir Cedric Hardwicke and Helena Pickard. [2] [3] He began his film career in Hollywood at the age of 10, in Victor Fleming's film A Guy Named Joe which starred Spencer Tracy. [2] He returned to England, attended Stowe School, and fulfilled his national service as a pilot officer in the Royal Air Force. [2] He attended the Royal Academy of Dramatic Art (RADA) and trained as an actor. [2] [4]

Hardwicke played at the Bristol Old Vic, the Oxford Playhouse and the Nottingham Playhouse before in 1964 joining Laurence Olivier's National Theatre. [5] He performed regularly there for seven years. He appeared with Olivier in William Shakespeare's Othello and Ibsen's The Master Builder . He also appeared in Peter Shaffer's The Royal Hunt of the Sun (with Robert Stephens), Charley's Aunt , Tom Stoppard's Rosencrantz and Guildenstern Are Dead , Congreve's The Way of the World , Georges Feydeau's A Flea in Her Ear (directed by Jacques Charon of the Comédie Française ), The Crucible , Luigi Pirandello's The Rules of the Game, Fyodor Dostoevsky's The Idiot and George Bernard Shaw's Mrs. Warren's Profession . [6] He returned to the National in 1977 for a production of Feydeau's The Lady from Maxim's. [7]

In 1973 he played Dr Astrov in Anton Chekhov's Uncle Vanya opposite Peter O'Toole at the Bristol Old Vic, and had an uncredited role as Charles Calthrop in the film The Day of the Jackal . [2] In 1975 he appeared in Frederick Lonsdale's On Approval at the Haymarket Theatre, and in 1976 he played Sir Robert Chiltern in Oscar Wilde's An Ideal Husband at the Yvonne Arnaud Theatre, a production with which he toured Canada.

In 1993 he played the role of C. S Lewis's brother Warnie opposite Anthony Hopkins in Shadowlands , directed by Richard Attenborough.

In 1995 he appeared in Ian McKellen's updated film of Richard III. His father, Sir Cedric Hardwicke, had appeared in the Laurence Olivier 1955 film version.

In 2001 he played Arthur Winslow in The Winslow Boy at the Chichester Festival Theatre, a role played by his father in the 1948 film. [2]

Hardwicke played Judas Iscariot in the Dennis Potter TV play Son of Man (1969). He became familiar to television audiences in the 1970s drama series Colditz , in which he played Pat Grant, a character based on the real-life war hero Pat Reid. [2] [7] He then played Arthur in the sitcom My Old Man . In 1978 he appeared as Bellcourt in the last filmed episode of The Sweeney , "Hearts and Minds". [9]

David Burke suggested Hardwicke as his successor in the role of Doctor Watson in the Granada Television adaptations of the Sherlock Holmes stories in The Return of Sherlock Holmes series, alongside Jeremy Brett as Holmes. Hardwicke played the role for eight years from 1986 to 1994, his first episode being "The Empty House" and his last "The Cardboard Box". He portrayed a very calm and attentive Watson, [10] somewhat intolerant of Holmes's more outlandish moods, and became permanently associated with it, also playing it on the West End stage with Brett in The Secret of Sherlock Holmes in 1989. [7] That same year, he also directed Going On by Charles Dennis at the Edinburgh Fringe Festival.

Hardwicke had two daughters, Kate and Emma, by his first marriage to Anne Iddon (died 2000), which ended in divorce. [7] He was married to Prim Cotton from 1994 until his death. [2] 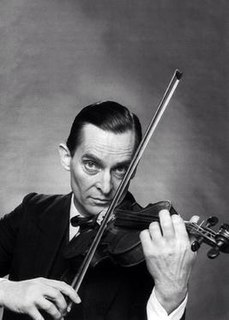 Mycroft Holmes is a fictional character appearing in stories written by Sir Arthur Conan Doyle. The elder brother of detective Sherlock Holmes, he is a government official and a founding member of the Diogenes Club. Mycroft is described as having abilities of deduction and knowledge exceeding even those of his brother, though their practical use is limited by his dislike of fieldwork.

"The Adventure of the Empty House", one of the 56 Sherlock Holmes short stories written by Sir Arthur Conan Doyle, is one of 13 stories in the cycle collected as The Return of Sherlock Holmes. It was first published in Collier's in the United States on 26 September 1903, and in The Strand Magazine in the United Kingdom in October 1903.

David Burke is an English actor, known for playing Dr. John Watson in the initial series of Granada Television's 1980s The Adventures of Sherlock Holmes, which starred Jeremy Brett in the title role. He also starred as Josef Stalin in the last two episodes of Reilly, Ace of Spies. 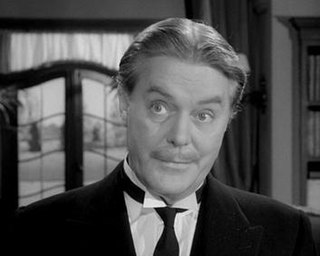 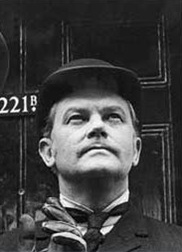 Nigel Hector Munro Stock was an English actor of stage, screen, radio and television, who played character roles in many films and television dramas. He was perhaps best known for his stint as Dr Watson in TV adaptations of the Sherlock Holmes stories, for his supporting roles as a solidly reliable English soldier or bureaucrat in several war and historical film dramas, and for playing the title role in Owen, M.D.. 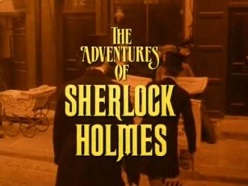 Sherlock Holmes is the overall title given to the series of Sherlock Holmes adaptations produced by the British television company Granada Television between 1984 and 1994. The first two series were shown under the title The Adventures of Sherlock Holmes and were followed by subsequent series with the titles of other short story collections by Arthur Conan Doyle. The series was broadcast on the ITV network in the UK and starred Jeremy Brett as the famous detective. His portrayal remains very popular and is accepted by many as the definitive on-screen version of Sherlock Holmes. Dr. Watson is portrayed as a competent associate, as in Conan Doyle's stories. 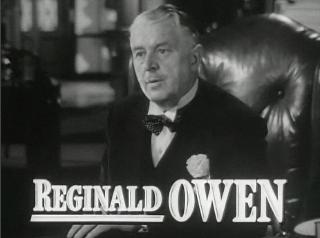 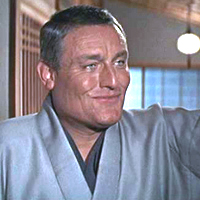 Charles Gray was an English actor who was well known for roles including the arch-villain Ernst Stavro Blofeld in the James Bond film Diamonds Are Forever, Dikko Henderson in a previous Bond film You Only Live Twice, Sherlock Holmes's brother Mycroft Holmes in The Adventures of Sherlock Holmes and as the Criminologist in The Rocky Horror Picture Show (1975). 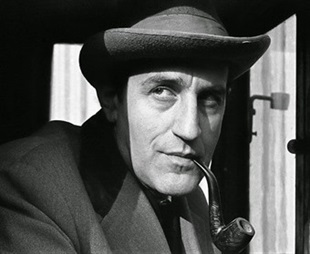 George Zucco was an English-born character actor who appeared in plays and 96 films, mostly American-made, during a career spanning over two decades, from the 1920s to 1951. In his films, he often played a suave villain, a member of nobility, or a mad doctor. 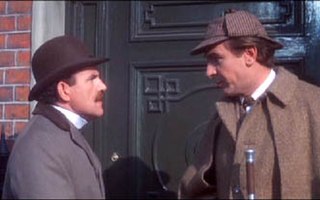 Charles Edwards is an English actor. He graduated from the Guildhall School of Music and Drama in 1992. 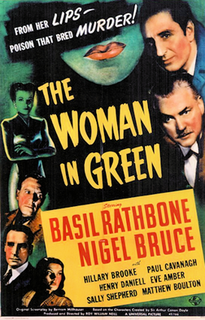 The Woman in Green is a 1945 American film, the eleventh of the fourteen Sherlock Holmes films based on the characters created by Arthur Conan Doyle. Directed by Roy William Neill, it stars Basil Rathbone as Sherlock Holmes and Nigel Bruce as Dr. Watson, with Hillary Brooke as the woman of the title and Henry Daniell as Professor Moriarty. The film follows an original premise with material taken from "The Final Problem" (1893) and "The Adventure of the Empty House" (1903). 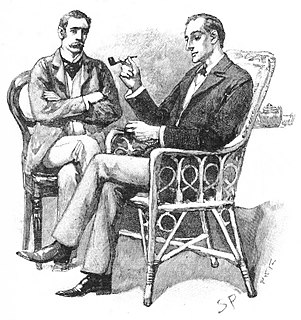 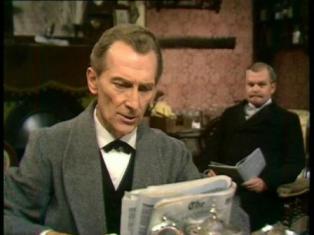 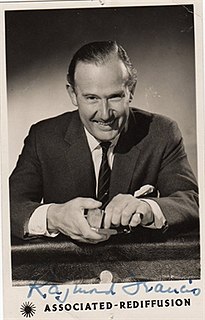