The son of Edward Henderson, former Dean of Salisbury, Henderson was born in Derby [3] and educated at Radley and Trinity College, Cambridge (BA 1931, MA 1942). [4] He trained for ordination at Cuddesdon College and was ordained deacon in 1934 and priest in 1935. [5]

John Monier Bickersteth was an English Anglican clergyman who served as the Bishop of Bath and Wells from 1975 to 1986, and Clerk of the Closet from 1979 to 1989.

Ian Macdonald Griggs was the 2nd Anglican Bishop of Ludlow from 1987 until 1994.

William Somers Llewellyn was the inaugural bishop of Lynn from 1963 until 1972. 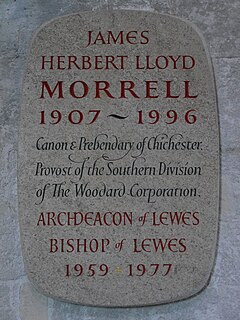 David Tustin was the Bishop suffragan of Grimsby from 1979 until 2000.

William Gordon Roe was a British Anglican bishop who served as Bishop of Huntingdon from 1980 until 1997.

Patrick Burnet Harris was a Church of England bishop who served in two episcopal positions.

Cecil John Patterson was an Anglican bishop in the mid part of the 20th century.

Ernest Eric Hawkey was the sixth Bishop of Carpentaria from 1968 to 1974.

Kenneth Graham Bevan was an Anglican missionary bishop in China.

Arthur William Goodwin Hudson was a coadjutor bishop in the Anglican Diocese of Sydney.

James Seth was an Anglican bishop in Madagascar. He was the first bishop of Tamatave from its creation in 1969 until his death in 1975.