Born in Halifax, Nova Scotia, he was ordained to the priesthood in 1874. In 1906, he was appointed Archbishop of Halifax, Nova Scotia. He followed Cornelius O'Brien in this position. On 14 July 1910, he consecrated St. Patrick's Cathedral in Halifax, and in 1913 became vice-patron of the Catholic Emigration Association of Canada, an organization established to help maintain immigrants' links to Catholicism and to encourage them to settle close to others who spoke the same language as they.

John Patrick Savage, OC, ONS was a Welsh-born Canadian physician and politician. Savage was the 23rd Premier of Nova Scotia between 1993 and 1997. He was born in Wales, and educated in both the United Kingdom and Ireland. He immigrated to Canada in 1967 and was a noted family physician in Dartmouth, Nova Scotia. He became the mayor of Dartmouth in 1985, and won re-election twice. He then became the leader of the Nova Scotia Liberal Party in 1992 and stepped down as mayor. In 1993, he defeated the incumbent provincial government and became premier. Savage was a controversial premier, bringing in many reforms in taxation, regional government, and government hiring practices. He resigned as premier in 1997 due to his low approval ratings in public polls. He died of cancer at the age of 70 in 2003. He was the father of Mike Savage, current mayor of the Halifax Regional Municipality. 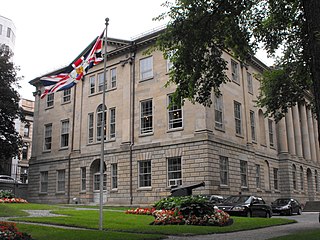 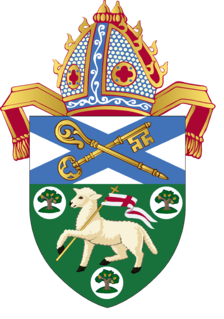 Archbishop James Morrison was the longest-serving bishop of the Diocese of Antigonish, Nova Scotia, Canada. Although one of the last powerful and austere Roman Catholic bishops in Canada, Morrison presided over a diocese that created one of the most successful Catholic social movements in Canada.

Cornelius O'Brien was a Canadian Roman Catholic priest, archbishop, and author of 39 books.

The Roman Catholic Diocese of Antigonish is a Latin Rite diocese in Nova Scotia, Canada. Its current diocesan ordinary is Wayne Joseph Kirkpatrick. 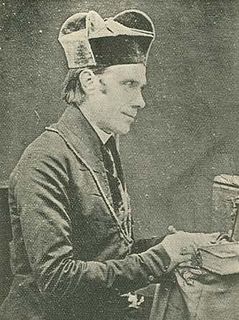 William Walsh,, was an archbishop of the Roman Catholic Archdiocese of Halifax. Born in Waterford, Co. Waterford, Republic of Ireland and died in Halifax, Nova Scotia.

The Nova Scotia order of precedence is a nominal and symbolic hierarchy of important positions within the province of Nova Scotia. It has no legal standing but is used to dictate ceremonial protocol at events of a provincial nature.

Frederick James "Fred" Hiltz is a Canadian retired Anglican bishop. From 2007 to 2019, he served as Primate of the Anglican Church of Canada.

Holy Cross Cemetery is a cemetery in Halifax, Nova Scotia, owned and operated by the Roman Catholic Archdiocese of Halifax-Yarmouth. It was constructed in 1843 under the direction of Archbishop William Walsh, on land provided by local authorities. Holy Cross Cemetery replaced the first Catholic cemetery in Halifax, the St. Peter's Cemetery located next to St. Mary's Basilica on Spring Garden Road. Since 1843, some 25,000 persons have been buried at Holy Cross, many of Irish descent, including Canada's fourth Prime Minister, Sir John Sparrow Thompson.

Richard William Smith is a Canadian prelate of the Roman Catholic Church. He is the eighth and current Archbishop of Edmonton, having previously served as Bishop of Pembroke from 2002 to 2007.

James Martin Hayes was a Canadian prelate of the Roman Catholic Church.

Gérard Pettipas, C.Ss.R. is a Canadian prelate of the Roman Catholic Church. He is a member of the Congregation of the Most Holy Redeemer (Redemptorists). He currently serves as archbishop of the Archdiocese of Grouard-McLennan.