Edward Kern (1860–1912) was a soldier who served in the U.S. war against Geronimo. He was a 19th and 20th century Los Angeles, California, politician and police chief who became an alcoholic and committed suicide.

Kern was born on a farm in Norwalk, Iowa, in 1860. At age 19 he went to Colorado, where he was a teamster. He moved through New Mexico to Arizona, where he did railroad construction work. Later, in Prescott, Arizona, he was chief of supplies, or "forage master," under General George R. Crook in the Army's campaign against the Indian leader Geronimo. When Nelson A. Miles took over from Crook in 1886, the new commander placed Kern in charge of the commissary. [1] [2] [3]

Kern came to Los Angeles along with Miles the same year, and Kern was discharged there. He then became a driver for the Los Angeles Ice and Cold Storage Company, rising to the position of a superintendent. He was also a stockholder in the company. [1] [2] [3]

The police board unanimously reappointed him as chief on January 8, 1907. [6] In 1908 he was reappointed as a director of the National Association of Chiefs of Police and announced that Los Angeles would be the site of the group's next convention. [7]

In a lengthy statement published in the Los Angeles Herald, Kern stressed that "The proposition of handling the Socialist speakers who are contending with the authorities for the right of what they call free speech has not reached the dignity of a problem in my mind." He said that the demonstrators "are not criminals or lawbreakers . . . . In every way except one they are peaceable, law-abiding men and women. They persist in breaking the one ordinance on the city books which prohibits them from speaking on the streets without a permit from the police commission." He stressed that the police would enforce the law. [8]

In 1909 Kern, then retired, was a defense witness in a criminal case against Police Captain Thomas A. Broadhead, who was charged with accepting a bribe for protecting the red-light district in Los Angeles during the time that Kern was police chief. Under direct examination, after testifying about his life background and history, he answered most other questions by defense counsel in a negative way, such as "I did not," "He did not" and "He never did." Under questioning by the prosecution, though, Kern was asked if he had told City Attorney Thomas L. Woolwine that "you would not close" the houses of prostitution because "it would scatter them all over the city." Kern responded, "I don't recall it in those words." [3] [9] Broadhead was acquitted. [10]

Board of Public Works

In January 1909 Kern resigned as police chief and was appointed by Mayor Arthur Harper to the Board of Public Works. [11] His stint in office, however, lasted only two months because, in the wake of complaints that he was unqualified, he unexpectedly quit his new job in March. [12] His appointment had been met with such disfavor that it was one of the reasons for a successful recall petition drive that eventually led to Mayor Harper's resignation. [13]

In October 1911, Kern, then living in Ocean Park, California, "was given to periodical drunken sprees" and, after examination by a medical committee, he was admitted voluntarily to the State Hospital for Inebriates in Patton, California, on the advice of his physician, Dr. Sumner J. Quint, who was made his legal guardian. The Los Angeles Times reported that as he was packing for his trip "Kern yesterday presented a pitiful spectacle. , , , His face was unshaven, haggard and drawn." [2] [14] [15]

The next year, Kern, who had been ill "for months," went to El Paso, Texas, on business, and soon his body was found by a chambermaid on April 20, 1912, in a hotel room bathtub with a bullet through the head. There was no message, but a revolver that friends had given him in Los Angeles lay beside the body. [16] [17]

A funeral service was conducted on April 27, 1912, by the Fraternal Order of Eagles in their lodge at 320 South Main Street, Los Angeles. Hundreds attended, many of them weeping, and the bier was guarded by policemen and firemen. The eulogy was given by close friend Earl Rogers, "who touched upon the sweet, kindly and whole-souled character of Kern." He was survived by his wife. [1]

Thomas Conner Lynch was an American lawyer who served as District Attorney in San Francisco and as Attorney General of California from 1964 to 1971. 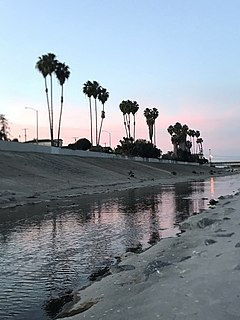 Ballona Creek is an 8.5-mile (13.7 km) tame and unsightly channelized stream in southwestern Los Angeles County, California that was once a “year-round river lined with sycamores and willows.” In conjunction with neighboring estuary Ballona Wetlands, Ballona Creek remains a “prime bird-watching spot for cormorants, owls, and migrating ducks and geese.”

The Los Angeles Chinese massacre of 1871 was a racial massacre targeting Chinese immigrants in Los Angeles, California, United States that occurred on October 24, 1871. Approximately 500 white and Hispanic Americans attacked, harassed, robbed, and murdered the ethnic Chinese residents of the old Chinatown neighborhood of the city of Los Angeles, California. The massacre took place on Calle de los Negros, also referred to as "Negro Alley". The mob gathered after hearing that a policeman and a rancher had been killed as a result of a conflict between rival tongs, the Nin Yung, and Hong Chow. As news of their death spread across the city, fueling rumors that the Chinese community "were killing whites wholesale", more men gathered around the boundaries of Negro Alley. A few 21st-century sources have described this as the largest mass lynching in American history.

Ballona is the name of three landforms and a bicycle path in West Los Angeles, named after the former rancho.

The alcohol laws of the United States regarding minimum age for purchase have changed over time. In colonial America, generally speaking, there were no drinking ages, and alcohol consumption by young teenagers was common, even in taverns. In post-Revolutionary America, such laxity gradually changed due to religious sentiments and a growing recognition in the medical community about the dangers of alcohol. The more modern history is given in the table below. Unless otherwise noted, if different alcohol categories have different minimum purchase ages, the age listed below is set at the lowest age given. In addition, the purchase age is not necessarily the same as the minimum age for consumption of alcoholic beverages, although they have often been the same.

Mission Acres was a historic rural community in the northern San Fernando Valley. Its historic boundaries correspond roughly with the former community of Sepulveda and present day community of North Hills within Los Angeles, California. The community's western border was Bull Creek, which flowed south out of Box Canyon in the western San Gabriel Mountains near San Fernando Pass.

The California Digital Newspaper Collection (CDNC) is a freely-available, archive of digitized California newspapers; it is accessible through the project's website. The collection contains over six million pages from over forty-two million articles. The project is part of the Center for Bibliographical Studies and Research (CBSR) at the University of California Riverside.

A Kiss In A Taxi is a lost 1927 American silent comedy film starring Bebe Daniels and directed by Clarence Badger. It is based on a French play, A Kiss in a Taxi, produced on Broadway in 1925. Famous Players-Lasky produced and Paramount Pictures distributed.

Albert Etter (1872–1950) was an American plant breeder best known for his work on strawberry and apple varieties.

Jessica Blanche Peixotto was a Jewish-American educator and writer.

Marie Azpiroz was a Spanish violinist.

The Los Banos Enterprise is a newspaper that serves the city of Los Banos, California. The paper is printed bi-weekly and has a circulation of 16,000 copies. 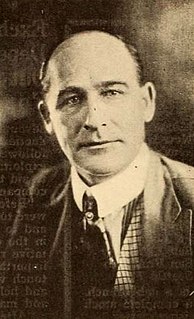 R. Cecil Smith was an American screenwriter and actor active during Hollywood's silent era. He collaborated frequently with his wife, Ella Stuart Carson, and the pair often wrote under the name the R. Cecil Smiths. He sold cars before he decided to turn his talents to writing. He has often been confused with actor Robert Smith.

Clarence E. Shurtleff was involved in the film business in the U.S. including as a producer for his namesake film company, C. E. Shurtleff, Inc.

Robert Whitaker was a Baptist minister and political activist born in 1863 in Padiham, Lancashire, England. He died in Los Gatos, CA in 1944. In 1869 he moved with his family to the United States. After attending Andover Newton Theological School he went on to hold several pastorates in the western United States including Oakland, CA, Los Gatos, CA., and Seattle, WA.

The California Equal Suffrage Association was a political organization in the state of California with the intended goal of passing women's suffrage.

Clois Francis Key (1909–1970) was a college and professional football player in the 1930s. Known as "Shorty," Key was probably most widely known at the time for his violation of college eligibility rules while starring for UCLA in 1935.