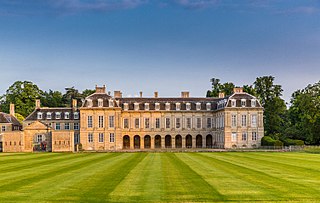 Boughton House is a country house about 3 miles (4.8 km) north-east of Kettering off the A4300 road near Geddington in Northamptonshire, England. Part of an estate of 11,000 acres, it is one of the seats of the Duke of Buccleuch, and famed for its beauty, its collections, and the fact it has survived virtually unchanged since the 17th century. While possessing a medieval core, its exterior evokes an opulent French chateau, causing it to be termed The English Versailles.

He was born at Weekley on 11 July 1616, the eldest son of Edward Montagu, 1st Baron Montagu of Boughton. He was educated at Oundle School and entered Sidney Sussex College, Cambridge, on 2 March 1631. [1] He represented the borough of Huntingdon in the Long Parliament (elected 23 October 1640) until called to the House of Lords on the death of his father in 1644. [2]

Weekley is a small village and civil parish in the English county of Northamptonshire. At the time of the 2001 census, the parish's population was 242 people, increasing to 297 at the 2011 Census. It is administered as part of the borough of Kettering. Of the 56 houses in the village, 20 have thatched roofs. Weekley is situated on the outskirts of Kettering. The busy A4300 road runs through the heart of the village dividing the village in two. 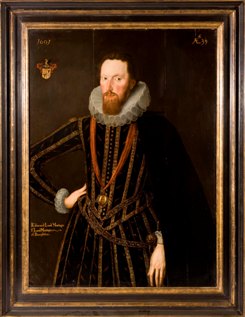 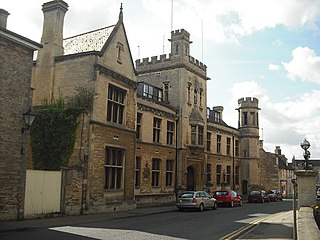 Oundle School is a co-educational boarding and day independent school in the market town of Oundle in Northamptonshire. The school has been governed by the Worshipful Company of Grocers of the City of London since its foundation by Sir William Laxton in 1556. Oundle has eight boys' houses, five girls' houses, a day house, a junior house and a junior day house. Together these accommodate more than 1100 pupils. It is the third largest boarding school in England after Eton and Millfield.

He took the engagement to the Commonwealth in October 1644, and was constantly in the House of Lords during the proceedings against Archbishop William Laud. On 18 July 1645 he was nominated by both houses of parliament one of the commissioners to reside with the Scottish army in England, and in that capacity treated for the surrender of Newark in May 1646. With Philip Herbert, 4th Earl of Pembroke and Basil Feilding, 2nd Earl of Denbigh he received the king's person from the Scots, and conducted him to Holmby. His report, read in the House of Lords on 10 June 1647, appeared in pamphlet form in London, 1647. He afterwards attended Charles till his escape in 1647. He took no part in the trial of the king, was summoned to sit as one of Oliver Cromwell's lords in December 1657, and welcomed the return of Charles II. [2]

The Engagement Controversy was a debate in England from 1649–1652 regarding loyalty to the new regime after Pride's Purge and the execution of Charles I. During this period hundreds of pamphlets were published in England supporting 'engagement' to the new regime or denying the right of English citizens to shift their allegiance from the deposed king to Oliver Cromwell and his associates.

William Laud was an English churchman, appointed Archbishop of Canterbury from 1633 during the personal rule of Charles I. Arrested in 1640, he was executed in 1645.

Newark-on-Trent or Newark is a market town and civil parish in the Newark and Sherwood district of the county of Nottinghamshire, in the East Midlands of England. It stands on the River Trent, the A1 – on the route of the ancient Great North Road – and the East Coast Main Line railway. The origins of the town are possibly Roman, as it lies on an important Roman road, the Fosse Way. The town grew around Newark Castle, now ruined, and a large market place, now lined with historic buildings. It was a centre for the wool and cloth trades. In the English Civil War, it was besieged by Parliamentary forces and relieved by Royalist forces under Prince Rupert.

After the Restoration he resided chiefly at Boughton House, died on 10 January 1684, and was buried at Weekley. [2]

He married Anne, daughter, and eventually heir, of Sir Ralph Winwood of Ditton Park, Buckinghamshire, by whom he had two sons and one daughter; Edward, who predeceased him, Ralph, who succeeded him, and Elizabeth, who married Sir Daniel Harvey, ambassador at Constantinople. [2]

Ditton Park, Ditton Manor House or Ditton Park House was the manor house and private feudal demesne of the lord of the Manor of Ditton, and refers today to the rebuilt building and smaller grounds towards the edge of the town of Slough in England. A key feature is its centuries-old moat which extends to most of the adjoining lawns and garden. Park areas extend to the north and west of the moat.

Edward Montagu was an English politician, courtier and naval officer. He was the MP for Sandwich, Kent.

Earl of Sandwich is a noble title in the Peerage of England, held since its creation by the House of Montagu. It is nominally associated with Sandwich, Kent. It was created in 1660 for the prominent naval commander Admiral Sir Edward Montagu. He was made Baron Montagu, of St Neots in the County of Huntingdon, and Viscount Hinchingbrooke, at the same time, also in the Peerage of England. The viscountcy is used as the courtesy title by the heir apparent to the earldom. A member of the prominent Montagu family, Lord Sandwich was the son of Sir Sidney Montagu, youngest brother of Henry Montagu, 1st Earl of Manchester, and Edward Montagu, 1st Baron Montagu of Boughton. 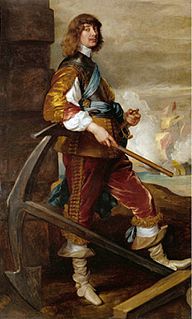 Algernon Percy, 10th Earl of Northumberland, 4th Baron Percy, KG was an English military leader and a prominent supporter of the Parliamentary cause in the English Civil War.

Ralph Montagu, 1st Duke of Montagu was an English courtier and diplomat.

John Montagu, 2nd Duke of Montagu,, styled Viscount Monthermer until 1705 and Marquess of Monthermer between 1705 and 1709, was a British peer. 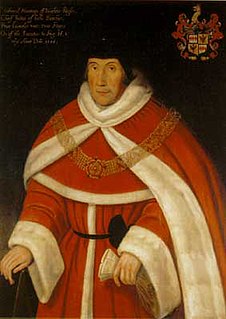 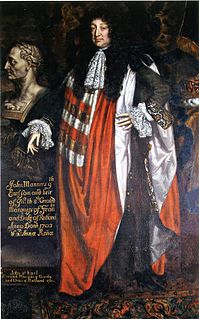 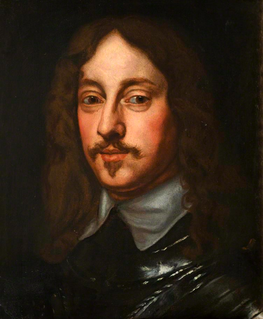 Sir William Montagu SL was an English judge and politician who sat in the House of Commons variously between 1640 and 1695.

Sir Sidney Montagu was an English politician who sat in the House of Commons at various times between 1593 and 1642. He supported the Royalist cause in the English Civil War.