Edward Richardson CMG (7 November 1831 –26 February 1915) was a New Zealand civil and mechanical engineer,and Member of Parliament. Born in England,he emigrated to Australia and continued there as a railway engineer. Having become a partner in a contracting firm,a large project caused him to move to Christchurch in New Zealand,in which country he lived for the rest of his life.

Richardson was born in London in 1831. His parents were Elizabeth Sarah Miller and her husband Richard Richardson (a merchant). He attended the City of London School. [3]

In 1861,Richardson emigrated to New Zealand to carry out the contract of building the Lyttelton Rail Tunnel. He married Frances Mary Elizabeth Corke at Holy Trinity Avonside on 27 April 1864. [3] [4]

In Melbourne,he first worked for the Victorian Government in roading and bridge design,and then set up a partnership with George Holmes to perform general contracting work. [3] [5]

The Canterbury Provincial Government had commissioned the construction of the Christchurch to Lyttelton railway and tunnel,but their first contractor (Smith &Knight) sought a significant additional payment over what had been agreed on,which the provincial government did not accept. William Moorhouse,the Superintendent (i.e. the elected head of the provincial council) at the time and proponent of the project,travelled to Melbourne to find a new contractor. Whilst the price submitted by Holmes and Richardson was the highest of three tenders,Moorhouse engaged them as he had confidence in their technical ability. [3] [6]

Richardson arrived in Lyttelton on the Prince Alfred in 1861 with 35 navvies and sufficient materials and equipment to begin the first stage of the railway between Christchurch and Ferrymead. During 1862,Richardson spent time in the European Alps to study the latest tunnel construction techniques and equipment on the Fréjus Rail Tunnel project. This experience was put to good use during the tunnel construction,which was carried out through volcanic rock. [3]

The tunnel project,completed in 1867,was one of the greatest engineering achievements in early New Zealand. [3] It was the colony's first rail tunnel and the first tunnel in the world to be driven through the side of an extinct volcano. [7] [8]

Richardson was elected onto the 6th Canterbury Provincial Council in May 1870 for the Town of Lyttelton electorate. He was re-elected in March 1874 for the 7th (and last) Council and held this role until the abolition of provincial government in October 1876. [9]

Member of the lower house

Richardson and Henry Wynn-Williams stood in the Christchurch West electorate in the 1871 election, [10] obtaining 234 and 214 votes,respectively. Richardson was thus declared elected. [11]

In the 1875 election,he contested the City of Christchurch electorate. He came second in this three-member electorate (Edward Stevens came first,and William Moorhouse,the person who caused him to come to New Zealand,came third) and was thus returned. [12]

He came fourth in the September 1879 election for the three-member Christchurch electorate (George Grey came first,and Samuel Paull Andrews and Edward Stevens came second with equal numbers of votes,and only 23 votes ahead of Richardson). [13] He petitioned against George Grey's return on technical grounds,as Grey had already been elected in the Thames electorate. [14] [15] [16] The electoral commission unseated Grey on 24 October, [17] with Richardson offered to fill this vacancy a few days later. Grey was allowed to keep the Thames seat and remained a member of parliament through that constituency. [18]

The City of Christchurch electorate was abolished at the end of the 7th session of parliament,and Richardson stood in Lyttelton in the 1881 election. He was narrowly defeated by Harry Allwright,who had a majority of 11 on Richardson. [19] Ironically,Allwright had been the chair of the 1879 electoral commission,and it had been his casting vote that unseated Grey and thus allowed Richardson back into the lower house.

Following a petition,the 1881 general election in the Stanmore electorate was declared invalid. The resulting 12 July 1882 by-election was contested by Walter Pilliet,Richardson and William Patten Cowlishaw (a partner of Francis James Garrick). They received 469,345 and 244 votes,respectively. Pilliet was declared elected with a majority of 124 votes. [20] [21]

Richardson stood in the 6 April 1883 by-election in the Selwyn electorate,coming second.

Richardson then stood in the 16 May 1884 by-election in the Kaiapoi electorate. He was returned unopposed and re-entered parliament. [22]

Soon after,he contested the Kaiapoi seat in the 1884 general election and was confirmed by the voters. [23] He was re-elected in the 1887 general election [24] and represented Kaiapoi until the 1890 election,when he retired from the lower house. [25]

In October 1872,Richardson became a member of the Waterhouse Ministry,and held the portfolio of Public Works. He retained that position in the successive Fox,Vogel,Pollen and Atkinson ministries. Poor health brought on by overwork caused him to resign his ministerial role in January 1877. [3] [5] [26]

As a public works expert,he was again appointed a Minister for Public Works under the Stout Vogel Government,and held the portfolio from September 1884 to October 1887. He was ranked third in cabinet below Robert Stout and Vogel. The family moved to Wellington in 1884 for this ministerial appointment. [3] [5] [27]

Member of the upper house

Richardson was appointed to the Legislative Council on 15 October 1892 and remained a member until 15 October 1899,when his term ended. [5]

Richardson bought the land around the Opawa railway station plus an adjacent 13 acres in 1871 and built his residence,The Hollies. It is believed that he designed the house himself,and it is broadly Australian in appearance. Stone from the tunnel project was used in the construction. Richardson was affected by the recession in the late 1880 and in 1889,the Bank of New Zealand repossessed the house and land,and onsold it to sheep farmer John Robert Campbell. The building is registered with Heritage New Zealand,and was registered on 24 June 2005 as a Category II heritage structure with registration number 3112. [28]

Richardson was appointed Companion of the Order of St Michael and St George (CMG) in the 1879 Birthday Honours. [5] His second wife (Frances) died on 1 October 1913. Richardson died in Wellington on 26 February 1915,and was survived by a son from his marriage with Margaret,and four sons and two daughters from his marriage with Frances,one of whom was the artist Mollie Tripe . [2] [3] He was interred at Karori Cemetery in Wellington. [29]

Ashley was a New Zealand electorate situated north of Christchurch. It was in use from 1866 to 1902,and was replaced with the Hurunui electorate. 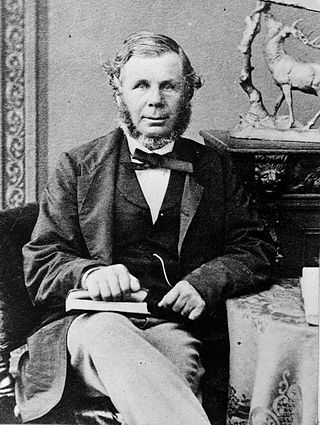 Robert Heaton Rhodes was a New Zealand politician,who represented the Akaroa electorate from 1871 to 1874,when he resigned. He was elected unopposed in 1871. 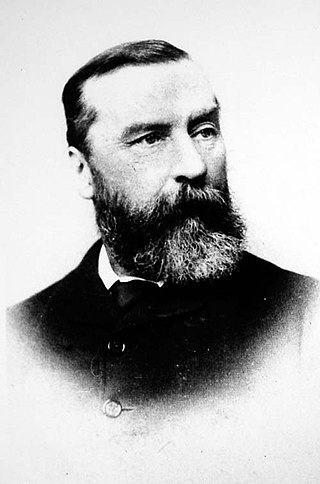 William Reeves was a New Zealand 19th century journalist and politician. He was the father of the author and politician the Hon. William Pember Reeves.

Kaiapoi was a rural New Zealand electorate,north of Christchurch in the Canterbury region of New Zealand from 1861 to 1946. It was represented by twelve Members of Parliament. 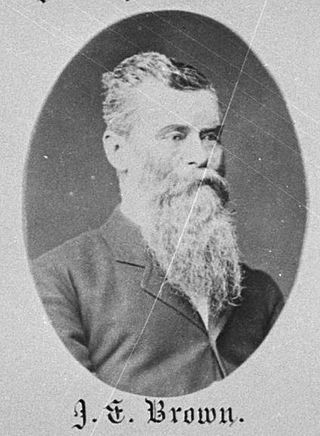 John Evans Brown was a 19th-century Member of Parliament in New Zealand. Born in Pennsylvania,he came to New Zealand after spending time in Australia,where he was a farmer and US Consul. He farmed in Canterbury,where he was known as "Yankee" Brown. Three of his brothers in law,through his first wife,served as his fellow Members of Parliament. He married a second time,as his first wife died young,and moved back to the United States. On his father's land in Asheville,he came to considerable wealth due to the mining of mica.

Christchurch Country was a parliamentary electorate in the Canterbury region of New Zealand from 1853 to 1860. It was thus one of the original 24 electorates used for the 1st New Zealand Parliament.

Stanmore was a parliamentary electorate in Christchurch,New Zealand from 1881 to 1887. The electorate was represented by two Members of Parliament.

Heathcote was a 19th-century parliamentary electorate in Christchurch,New Zealand.

Edward Cephas John Stevens was a New Zealand politician in provincial government in Canterbury,and a member of both the lower and upper houses of parliament. A businessman,he controlled the Christchurch Press for many decades. He was instrumental in introducing cricket to Canterbury and one of his dealings as a land and estate agent resulted in the creation of Lancaster Park.

John Thomas Peacock MLC JP was a New Zealand businessman,philanthropist and politician. He came to Canterbury in 1844,several years before organised settlement started.

Isaac Wilson was a 19th-century Member of Parliament in Canterbury,New Zealand. He represented the Kaiapoi electorate from 1881 to 7 April 1884,when he resigned because of failing health,and was replaced by Edward Richardson.

Samuel Paull Andrews was a 19th-century politician in Christchurch,New Zealand. Originally from the Isle of Wight,he was the first working class man to become a Member of Parliament in his chosen country.

Walter Hippolyte Pilliet JP was a 19th-century Member of Parliament in Christchurch,New Zealand. He worked initially as a surveyor and was then resident magistrate in several places. He was a newspaper editor and was represented in Parliament for one term. 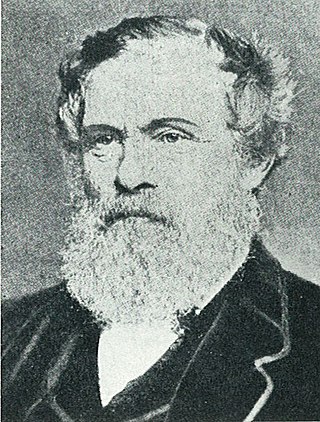 John Ollivier was a Member of Parliament in New Zealand,but was better known for his membership of the Canterbury Provincial Council. He was the second chairman of the Christchurch Town Council.

William Thomson was a 19th-century politician from Christchurch,New Zealand,originally from Scotland. He held office at all levels of government,from Parliament and Provincial Council to chairman of a road board. In his professional life,Thomson was an auctioneer,accountant and commission agent. He had rural holdings in Governors Bay and at the Esk River.

Wikimedia Commons has media related to Edward Richardson .
This page is based on this Wikipedia article
Text is available under the CC BY-SA 4.0 license; additional terms may apply.
Images, videos and audio are available under their respective licenses.