Edward Seymour, 1st Earl of Hertford, 1st Baron Beauchamp, KG (22 May 1539 – 6 April 1621), of Wulfhall and Totnam Lodge in Great Bedwyn, Wiltshire, of Hatch Beauchamp in Somerset, of Netley Abbey, Hampshire, and of Hertford House, Cannon Row in Westminster, is most noted for incurring the displeasure of Queen Elizabeth I by taking part in more than one clandestine marriage.

Seymour was the eldest son of Edward Seymour, 1st Duke of Somerset (c.1500 – 1552) by his second wife Anne Stanhope (c.1497 – 1587), and was a nephew of Jane Seymour, a wife of Henry VIII. Although his father had sons by his first marriage to Catherine Fillol, these were postponed by special remainder to the succession of his dukedom behind the sons of his second marriage, due to her suspected adultery. The senior line did eventually inherit the dukedom in 1750, as the special remainder allowed, when the 7th Duke of Somerset died leaving no sons.

From 1547, when his father was created Duke of Somerset, his son Edward Seymour was styled by the duke's subsidiary title of Earl of Hertford. He was educated with the young Prince Edward, later Edward VI, and was knighted on the occasion of Edward's coronation. [1]

On 7 April 1550, he was sent to France as a hostage, returning three weeks later. Following his father's disgrace and execution, his son was barred from inheriting his titles and most of his wealth. Some of his father's lands and property were restored to him by Edward VI, but he still seems to have been forced to rely on Sir John Thynne for some financial support. [1] Under Queen Mary he was "restored in blood", but was not given back his title; Queen Elizabeth I created him Earl of Hertford, in the earldom's third creation, in 1559. [1]

A series of clandestine marriages

His first wife, Lady Katherine Grey, was a potential claimant to Elizabeth's throne, and law established that it was a penal offence for her to marry without notifying the Sovereign. They were married by an anonymous clergyman at Hertford House in Cannon Row, Westminster, before 25 December 1560. The marriage was kept secret until August nearly a year later, when Katherine became visibly pregnant and she confided the reason to Lord Robert Dudley. Each was ordered to confinement in the Tower; Katherine was confined immediately, and Seymour imprisoned upon his return from a tour of the continent with Sir Thomas Cecil. While in custody, they were questioned about every aspect of their marriage, but they both claimed to have forgotten the date.

A commission was begun, headed by Archbishop Parker in February 1562. Under this pressure, Lady Katherine finally declared that they had waited for Elizabeth to quit the capital for Eltham Palace. Servants were questioned, and none of them could remember the exact date either. John Fortescue said it was 'in November'. The priest could not be located, but by consulting the accounts of the Cofferer of the Household the marriage date was decided to be 27 November.

His son Edward was declared illegitimate and the father was fined 15,000 pounds in Star Chamber for "seducing a virgin of the blood royal."

Despite all this, the Earl apparently found a way to continue marital relations with his wife in the Tower. In February 1563, Thomas Seymour was born. Lady Katherine died in 1568, and Seymour was finally allowed out of the Tower and allowed to re-appear at court. Officially his sons remained bastards. In 1576 he carried the sword of state at Elizabeth's procession of the knights of the garter. [5]

Bellocamp(o) eram, Graia genetrice, Semerus. Tres habui natos, est quibus una soror ("I was Beauchamp, a Seymour, by my mother Grey. I have had three born of which one a sister")

Frances Howard, daughter of William Howard, 1st Baron Howard of Effingham, was a gentlewoman of the Privy Chamber. In May 1573 she and her sister Douglas, Lady Sheffield were said to be rivals for the affections of the Earl of Leicester. [11]

In 1582, she married Hertford. Their union was in secret, and remained so for nearly a decade, while Frances continued at court. Hertford attempted to have this marriage set aside in 1595 (hoping to clear his still illegitimate sons' claim to the throne). He was arrested again, and Frances died in 1598. She was buried in Westminster Abbey. [12]

In May 1601, he secretly married once more, to the wealthy widow Frances Prannell, also born Frances Howard, the daughter of Thomas Howard, 1st Viscount Howard of Bindon. The marriage was performed by Thomas Montfort without banns or licence, for which Monfort was suspended for three years by Archbishop John Whitgift. [13]

His principal seats were as follows:

The arms of Edward Seymour, 1st Duke of Somerset (died 1552), quartered the original arms of the head of the family with a new grant of arms from his nephew King Edward VI.

Lord Hertford died in 1621 at Netley Abbey, Hampshire, and was buried in the Seymour Chapel of Salisbury Cathedral in Wiltshire, where his elaborate monument in white alabaster with effigies of himself and his first wife survives. [16]

Edward Seymour, 1st Duke of Somerset, also known as Edward Semel, was the eldest surviving brother of Queen Jane Seymour (d. 1537), the third wife of King Henry VIII. He was Lord Protector of England from 1547 to 1549 during the minority of his nephew King Edward VI (1547–1553). Despite his popularity with the common people, his policies often angered the gentry and he was overthrown. 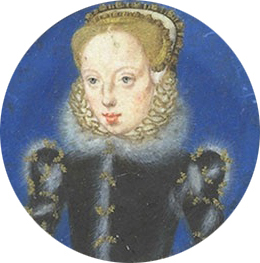 Katherine Seymour, Countess of Hertford was a younger sister of Lady Jane Grey.

Francis Seymour-Conway, 1st Marquess of Hertford, KG, PC, PC (Ire) of Ragley Hall, Arrow, in Warwickshire, was a British courtier and politician who, briefly, was Viceroy of Ireland where he had substantial estates. 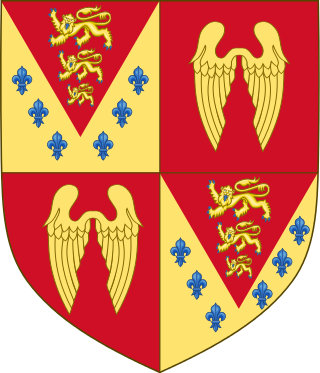 William Seymour, 2nd Duke of Somerset, was an English nobleman and Royalist commander in the English Civil War. 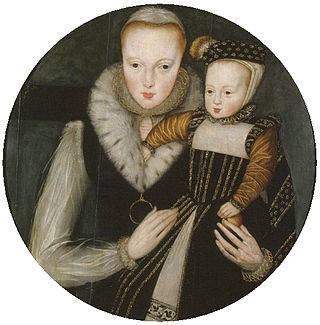 Tottenham House is a large Grade I listed English country house in the parish of Great Bedwyn, Wiltshire, about five miles southeast of the town of Marlborough. It is separated from the town by Savernake Forest, which is part of the Tottenham Park estate. 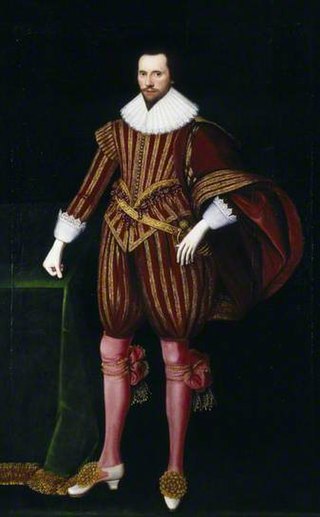 Frances Seymour, Duchess of Somerset was an English noblewoman who lived during the reigns of Elizabeth I, James I, Charles I and Charles II. Her father was Robert Devereux, 2nd Earl of Essex, Elizabeth I's favourite who was executed for treason in 1601. She was the second wife of William Seymour, 2nd Duke of Somerset, and the mother of his seven children. 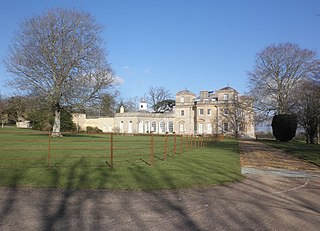 The Church of Saint Mary the Virgin is the parish church of Great Bedwyn, Wiltshire, England, and a Grade I listed building. The church was built in the Norman style in the 12th century, but beneath the existing building are Saxon remains dating back to the 10th century. The church boasts a handsome memorial to Sir John Seymour, father of King Henry VIII's wife Jane Seymour, and grandfather of King Edward VI of England.

Wikimedia Commons has media related to Edward Seymour, 1st Earl of Hertford .
This page is based on this Wikipedia article
Text is available under the CC BY-SA 4.0 license; additional terms may apply.
Images, videos and audio are available under their respective licenses.