Born Edwin Alfred Teale in Joliet, Illinois, to Oliver Cromwell and Clara Louise (Way) Teale, his interest in the natural world was fostered by childhood summers spent at his grandparents' "Lone Oak" farm in Indiana's dune country—experiences recalled in his book Dune Boy (1943). [1] At the age of nine, Teale declared himself a naturalist and at 12 changed his name to Edwin Way Teale. [2] :p8–9

He received a B.A. from Earlham College in English literature in 1922, then took a job at Friends University in Wichita, Kansas. Teale taught at Friends from 1922–1924 and served as men's and women's debate coach, yearbook adviser and chairman of the campus Peace Contest. [3] In 1923 he married Nellie Imogene Donovan, also on the Friends faculty, whom he had met while at Earlham College. [2] :p9

In 1924, Edwin and Nellie moved to New York City so Edwin could pursue his education at Columbia University. Teale chose Columbia in part

... because it was in New York and it wouldn't take two months to get a manuscript back from a magazine. [2] :p10

In 1926 he received his Master of Arts degree from Columbia University.

In New York, Teale spent 13 years in his first full-time writing job, as a staff writer for Popular Science , working on a wide variety of assignments. [2] :p11 In 1937, Teale's first photographic nature study, Grassroots Jungle, was published from among 200 of Teale's insect photographs, many of which were taken on a 4-acre (1.6 ha) plot of land near his home on Park Avenue in Baldwin, Long Island [2] :p12–17,50 This was followed, in 1941, by The Golden Throng, a combination of text and photographs on bees.

At the age of 42, Teale left Popular Science to become a freelance photographer and nature writer. [2] :p15

In 1942 he wrote Byways to Adventure: A Guide to Nature Hobbies as well as Near Horizons, which received the 1943 John Burroughs Medal for distinguished natural history writing. [4]

In March 1945 Edwin's son David was killed in action in Germany. [2] :p19 The Teales began a series of trips across the country, in part to deal with their grief. That same year, Lost Woods was published and received positive reviews. [5]

On February 14, 1947, the Teales set off in their black Buick for a 17,000-mile (27,000 km) roadtrip. They headed first to the Florida Everglades, then zigzagged northward following the advance of spring. Teale wrote about the adventure in North with the Spring . The book was followed by three others on the North American seasons: Journey Into Summer , Autumn Across America , and Wandering Through Winter , which won the Pulitzer Prize for General Non-Fiction in 1966. [6]

Teale worked as a co-writer for a segment titled "Vernal Equinox" on the March 20, 1955 episode of Omnibus, a TV-Radio Workshop of the Ford Foundation produced by Robert Saudek and hosted by Alistair Cooke on the CBS Television Network. [9]

Teale became president of the Thoreau Society in 1958, the same year that Autumn Across America was presented to the White House Library. He received an Indiana Author's Day award in 1960 and the Doctor of Humane Letters (LHD) honorary degree from Indiana University in 1970. [10] Earlham College honored Teale with an Honorary Doctor of Letters degree. [2] :p51

In 1959, the Teales left the increasing suburbanization of their Long Island home for a 130-acre (53 ha) farm in Hampton, Connecticut, which they named "Trail Wood", and which Teale chronicled in A Naturalist Buys an Old Farm (1974). The property was further described in A Walk through the Year (1978). Situated next to the Natchaug State Forest, Trail Wood is now managed as a nature preserve by the Connecticut Audubon Society. [11]

In 1975, Teale received the Ecology Award from the Massachusetts Horticultural Society [12] and the Conservation Medal from the New England Wildflower Society. [13]

Teale was an elected fellow of the American Association for the Advancement of Science and the New York Academy of Sciences, and an associate of the Royal Photographic Society.

In 1980 while working with author Ann Zwinger on the book A Conscious Stillness: Two Naturalists on Thoreau's Rivers, Teale died. Teale's portion of the book was nearly complete at the time of his death, and he was included as co-author when the book was published in 1982. [14]

Teale's papers consume 238 feet (73 m) in the University of Connecticut Archives & Special Collections at the Thomas J. Dodd Research Center in Storrs, Connecticut and include:

... field notes and drafts for each of his books, early childhood writings, professional writings for magazines, newspapers and book reviews, correspondence- both personal and professional, personal and family documents, scrapbooks, and memorabilia, as well as his photographs (prints, negatives, and transparencies) and his personal library. There is also one box of original John Burroughs material Teale collected over the years. [17]

Teale's last will and testament of September, 1980, bequested to The Concord Free Public Library, Concord, Massachusetts, his

Henry David Thoreau was an American essayist, poet, and philosopher. A leading transcendentalist, he is best known for his book Walden, a reflection upon simple living in natural surroundings, and his essay "Civil Disobedience", an argument for disobedience to an unjust state.

Hampton is a town in Windham County, Connecticut, United States. The population was 1,758 at the 2000 census.

Hiking is a long, vigorous walk, usually on trails or footpaths in the countryside. "Hiking" is the preferred term in Canada and the United States; the term "walking" is used in these regions for shorter, particularly urban walks. In the United Kingdom and the Republic of Ireland, the word "walking" describes all forms of walking, whether it is a walk in the park or backpacking in the Alps. The word hiking is also often used in the UK, along with rambling, hillwalking, and fell walking. The term bushwalking is endemic to Australia, having been adopted by the Sydney Bush Walkers club in 1927. In New Zealand a long, vigorous walk or hike is called tramping. It is a popular activity with numerous hiking organizations worldwide, and studies suggest that all forms of walking have health benefits.

Jean-Henri Casimir Fabre was a French naturalist, entomologist, and author known for the lively style of his popular books on the lives of insects. 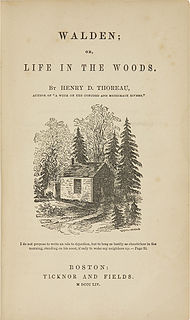 Walden is a book by American transcendentalist writer Henry David Thoreau. The text is a reflection upon simple living in natural surroundings. The work is part personal declaration of independence, social experiment, voyage of spiritual discovery, satire, and—to some degree—a manual for self-reliance.

Donald Culross Peattie was an American botanist, naturalist and author. He was described by Joseph Wood Krutch as "perhaps the most widely read of all contemporary American nature writers" during his heyday. His brother, Roderick Peattie (1891–1955), was a geographer and a noted author in his own right. Some have said that Peattie’s views on race may be considered regressive, but that expressions of these views are "mercifully brief and hardly malicious".

John Burroughs was an American naturalist and nature essayist, active in the U.S. conservation movement. The first of his essay collections was Wake-Robin in 1871. 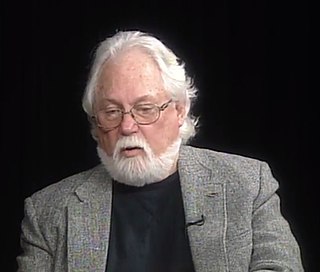 Robert Michael Pyle is an American lepidopterist, writer, teacher, and founder of the Xerces Society for Invertebrate Conservation.

Nature writing is nonfiction or fiction prose or poetry about the natural environment. Nature writing encompasses a wide variety of works, ranging from those that place primary emphasis on natural history facts to those in which philosophical interpretation predominate. It includes natural history essays, poetry, essays of solitude or escape, as well as travel and adventure writing. 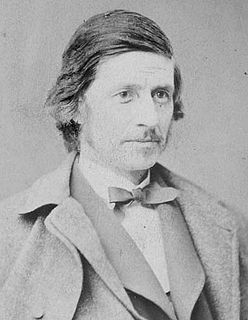 Franklin Benjamin Sanborn was an American journalist, author, and reformer. Sanborn was a social scientist, and a memorialist of American transcendentalism who wrote early biographies of many of the movement's key figures. He founded the American Social Science Association, in 1865, "to treat wisely the great social problems of the day". He was a member of the Secret Six, or "Committee of Six", which funded the militant abolitionist John Brown.

The John Burroughs Medal, named for nature writer John Burroughs (1837–1921), is awarded each year in April by the John Burroughs Association to the author of a book that the association has judged to be distinguished in the field of natural history. Only twice has the award been given to a work of fiction.

The Sudbury River is a 32.7-mile-long (52.6 km) tributary of the Concord River in Middlesex County, Massachusetts, in the United States.

John Kenneth Terres, was an American naturalist and author. He is best known for his popular works on North American birds. He authored more than fifty works, usually writing as John K. Terres.

Ann Haymond Zwinger (1925–2014) was the author of many natural histories noted for detail and lyrical prose. 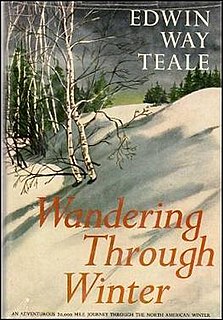 Wandering Through Winter: A Naturalist's Record of a 20,000-Mile Journey Through the North American Winter is a non-fiction book written by Edwin Way Teale, published in 1965 by Dodd, Mead and Company, and winner of the 1966 Pulitzer Prize for General Non-Fiction. The book was republished in 1990 by St Martin's Press.

David Rains Wallace is an American writer who has published more than twenty books on conservation and natural history, including The Monkey's Bridge and The Klamath Knot. He has written articles for the National Geographic Society, The Nature Conservancy, the Sierra Club, and other groups. Wallace's work also has appeared in Harper's Magazine, The New York Times, Sierra, Wilderness and other periodicals.

Helen Gere Cruickshank was an American nature writer and photographer of birds in their natural habitats in many areas of the world.