Eerik Siikasaari (born 8 October 1957 in Finland) is a Finnish jazz bassist who is probably best known as a member of Trio Töykeät, a Finnish jazz trio. He is also the bassist of Espoo Big Band, and actively teaches music in Espoo-based Pop/Jazz-school Ebeli. Has won three minor awards in Finland. 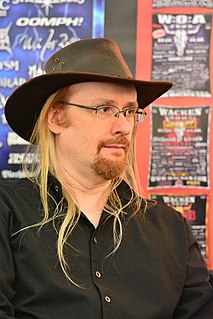 Jens Ola Johansson is a Swedish keyboardist and pianist who currently plays in the Finnish power metal band Stratovarius and Ritchie Blackmore's rock project Rainbow. He is notable for his high-speed neoclassical and fusion style.

"Matte Kudasai" is a ballad by the progressive rock band King Crimson. Featuring vocals by Adrian Belew, it was released as the first single from the album Discipline (1981). In the UK, the single just missed the chart. The title means "Wait, Please" in Japanese.

Trio Töykeät was a Finnish jazz trio. Their music ranges from humorous ragtimes to sentimental waltzes. Their playing style is often rhythmic, energetic and virtuosic. The group disbanded in 2008.

G'day may refer to:

Rami Eskelinen, is a Finnish jazz drummer who is probably best known as a member of Trio Töykeät, a Finnish jazz trio. He is also the drummer of Espoo Big Band, and actively teaches music in Espoo-based Pop/Jazz-school Ebeli. He played for Erja Lyytinen until 2010.

Mikko Innanen, is a saxophonist and composer.

Jukka Tapio Linkola is a Finnish jazz pianist and classical composer. He has composed music for the Finnish National Opera and led several jazz Big Bands. In addition he has won two Jussi awards for his film music, which another came from the 1988 film The Glory and Misery of Human Life. His euphonium concerto is considered a standard in the repertoire.

Lennart Ginman is a Danish-Finnish bassist, composer and music producer. He has cooperated with artists like Steen Jørgensen, lead singer of Sort Sol in two joint albums, and Kirk Lightsey, an American jazz pianist with a joint album.

This is a timeline documenting events of Jazz in the year 1957.

Susan Aho is a Finnish folk music singer-songwriter and a member of the Värttinä music group. In 2010, she represented Finland in the Eurovision Song Contest 2010 as part of the duo Kuunkuiskaajat.

Olavi Louhivuori is a Finnish jazz drummer and composer, the leader of his own ensemble Oddarrang, and also performer within several other bands. He is married to the singer Emma Salokoski.

Alexi Tuomarila is a Finnish jazz pianist and composer..