Koji Yamase is a Japanese football player who plays for Ehime FC. His father Isao Yamase participated in the 1984 Winter Olympics as a biathlete. His brother Yukihiro Yamase is also footballer.

The 2006 J. League Division 2 season is the 35th season of the second-tier club football in Japan and the 8th season since the establishment of J2 League. 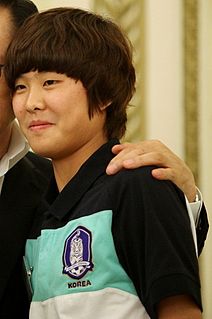 Statistics of Nadeshiko.League in the 2011 season. INAC Kobe Leonessa won the championship.

Kumamoto Renaissance FC (熊本ルネサンスフットボールクラブ) is a women's football club playing in Japan's football league, Q League. Its hometown is the city of Kumamoto.

The 2013 FC Gifu season sees FC Gifu compete in J. League Division 2 for the sixth consecutive season as well as competing in the 2013 Emperor's Cup.

Tsukuba F.C. Ladies (つくばFCレディス) is a women's football club playing in Japan's football league, Kanto League. Its hometown is the city of Tsukuba.

FC Imabari (FC今治) is a Japanese football club based in Imabari city, Ehime Prefecture. They play in the J3 League.