The municipality is located in the southerneastern end of Innlandet county. It is bordered to the north by the municipality of Kongsvinger and in the west by Aurskog-Høland, Nes and Sør-Odal. Eidskog borders on Sweden, both to the east and south.

The Old Norse form of the name was Eiðaskógr. The first element is the plural genitive case of eið which means "path between two lakes". The last element is skógr which means "woods". Thus "the woods with the many eiðs". (In old times people travelled in small boats on the lakes and the rivers, but they had to drag the boats over the eids.)

The coat of arms is from modern times. It was granted on 12 September 1986. The arms show a gray background with a black grouse, a common inhabitant of the many forests in the municipality. Forestry is also one of the main sources of income in the area. [3]

The name Eidskog is ancient and was used for the region between today's Kongsvinger in Norway and Arvika in Sweden. Eskoleia, the route through Eidskog, was (and continues to be in the form of Riksvei 2) one of the most important traffic arteries between Norway and Sweden. The name was already in use during the saga period and became, after the canonization of Saint Olaf and important pilgrim's route from Europe to Nidaros. At Midtskog (Norwegian : middle of the woods), today called Matrand, a stave church was raised in the 12th century. Today, Eidskog church is built on the same site and was constructed in 1665.

The way through Eidskog was also militarily important and many times through history has been the point of Swedish strikes into Hedmark. To defend against these assaults, a number of fortifications were built in the vicinity, including ones at Magnor and Matrand, but the chief fortification was Kongsvinger Fortress.

The last Swedish attack through Eidskog was in 1814 when Major General Carl Pontus Gahn on July 31 crossed the border and marched against Kongsvinger. His forces were stopped at Lier outside Kongsvinger on August 2 by troops led by Lieutenant Colonel Andreas Samuel Krebs (1769-1818) and retreated to Eidskog. On August 4, Krebs followed after to drive Swedish troops off Norwegian territory. The two forces met in the Battle of Matrand which was the bloodiest battle of the war and ended with a Norwegian victory.

Later in 1814, Norway was joined in union with Sweden and the confrontations at the Eidskog border ended.

The route through Eidskog became an important connection between the two countries; this was strengthened with the opening of the Grenseban railway in 1862, which connected Christiania to Stockholm. 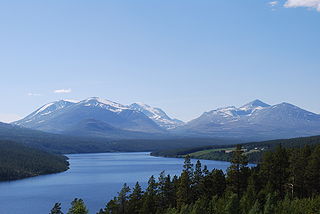 Hedmark was a county in Norway before 1 January 2020, bordering Trøndelag to the north, Oppland to the west and Akershus to the south. The county administration is in Hamar. 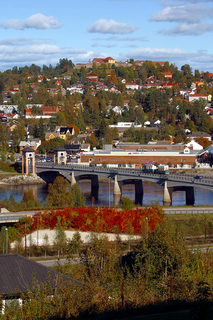 Kongsvinger (help·info) is a town and is a municipality in Innlandet county, Norway. It is part of the traditional region of Glåmdal. The administrative centre of the municipality is the town of Kongsvinger.

Grue is a municipality in Innlandet county, Norway. It is part of the traditional region of Solør. The administrative centre of the municipality is the village of Kirkenær. 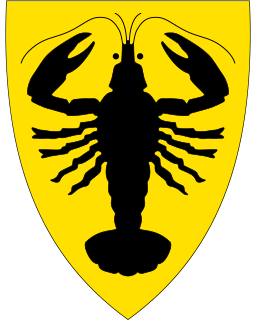 Sør-Odal is a municipality in Innlandet county, Norway. It is part of the traditional region of Odalen. The administrative centre of the municipality is the village of Skarnes.

Våler is a municipality in Innlandet county, Norway. It is part of the traditional region of Solør. The administrative centre of the municipality is the village of Våler. 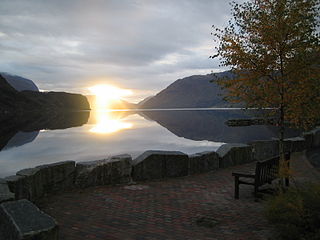 Stryn is a municipality in the county of Vestland, Norway. It is located in the traditional district of Nordfjord. The administrative center of the municipality is the village of Stryn. The municipality is located along the innermost part of the Nordfjorden. Some of the main villages in Stryn include Loen, Innvik, Utvik, Randabygda, Olden, and Flo.

Glåmdalen or Glommadal is a valley in Innlandet in Eastern Norway formed by the river Glomma. Glåmdalen is also a newer designation for the traditional district around the river Glomma, especially Odalen, Solør and in a wider sense the name is used also by Østerdalen.

Vinger is a traditional district and a parish as well as being a former municipality in Kongsvinger in Innlandet, Norway. The parish of Vinger was established as a municipality on 1 January 1838. 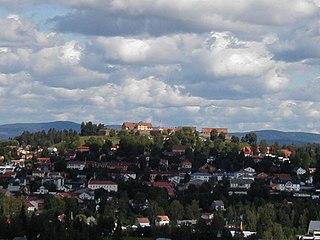 Kongsvinger Fortress is located in the city and municipality of Kongsvinger in the county of Hedmark, Norway. It is situated on a hill west and north of the Glomma river, standing astride the ancient Vinger Royal Road, which connected Norway and Värmland, Sweden as well as on the north-south Norwegian route along the Glomma. As Kongsvinger formed a key junction point for these routes, fortifications were constructed there to protect against invasion from the east.

Vinger Royal Road (Eskoleia) was the historical name of an ancient route in southern Norway. Historically Eskoleia was one of the most important traffic arteries between Norway and Sweden. It provided an established road leading both north and south from the Swedish border.

The Soot Canal was a canal system located at Eidskog in Innlandet, Norway. Constructed in 1849, it has Norway's oldest sluice gates. It was the work of Engebret Soot (1786-1859). It was built to allow timber to be transported (floated) to the Halden sawmills. The canal was 1.5 km long and had 16 locks which extended from Lake Skjervangen at 185 m above sea level up to Lake Mortsjølungen at 201 m above sea level. 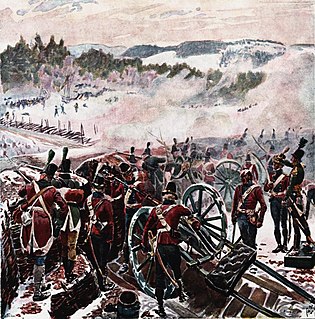 The Battle of Lier was fought on 2 August 1814 between Sweden and the newly independent Norway as part of the Swedish-Norwegian War of 1814. The battle was the first major action of the war, in which an outnumbered Swedish force attempted to storm the Norwegian entrenchment; the Norwegian victory served as an important part to boost morale among the Norwegian troops. This was the second time during the Napoleonic Wars that a battle had taken place at Lier, the first was in 1808. 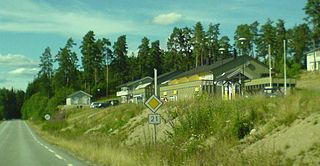 Setskog is a village and a former municipality in Viken county, Norway. It bordered Østfold county to the south, Hedmark county to the north and Sweden to the east.

The Battle of Matrand was a military battle on 5 August 1814 between Norwegian and Swedish forces as part of the Swedish-Norwegian War of 1814. The battle took place near the village of Matrand in Eidskog and at Skotterud. It was the bloodiest battle of the entire war, in which the Swedes lost more than 340 men, of which 270 were captured; the Norwegians lost around 50 men with 90 wounded and 36 captured. 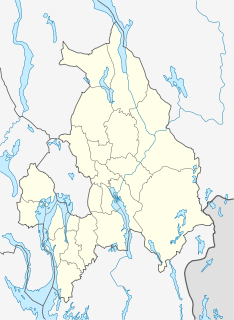 Grasmo is a small settlement in eastern Norway, on the border to Sweden. Its in the northern part of the village of Setskog in Aurskog-Høland municipality in Akershus County. It is currently inhabited by 6-7 families.

Innlandet is a county in Norway. It was created on 1 January 2020 with the merger of the old counties of Oppland and Hedmark. The new county has an area of 52,113 square kilometres (20,121 sq mi), making it the second largest county in Norway after Troms og Finnmark county.