"El Rey" (English: "The King") is a 1971 song by José Alfredo Jiménez. It is one of his best known songs and a Latin Grammy Hall of Fame Award recipient. [1] [2] [3] [4] The song is about "a macho guy convinced his rough-and-tumble life doesn't preclude him from remaining the king among his peers". [3]

A chart published by Record World credited "El Rey" as reaching number one in Mexico in 1974, [5] a year after Jiménez's death.

The song has been recorded by several artists including Vicente Fernández whose version peaked at number 40 on the Hot Latin Songs chart. [6]

In 2022, American singer Christina Aguilera released "La Reina" (transl. "The Queen") from her ninth studio and second Spanish-language album, Aguilera (2022) as a "respectful response" to Fernández' version of "El Rey". [7] In her version, Aguilera emphasizes how a king will always be a king, but that he's nothing without his queen. [8] Aguilera's rendition received acclaim.

Alberto Aguilera Valadez, known professionally as Juan Gabriel, was a Mexican singer, songwriter and actor. Colloquially nicknamed as Juanga and El Divo de Juárez, Juan Gabriel was known for his flamboyant style, which broke barriers within the Latin music industry. Widely considered one of the best and most prolific Mexican composers and singers of all time, he has been referred to as a pop icon.

José Alfredo Jiménez Sandoval was a Mexican singer-songwriter of rancheras, whose songs are considered the basis of modern Mexican music. 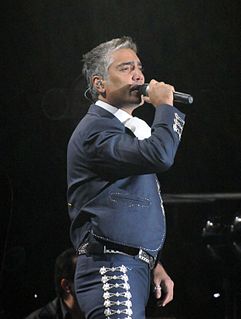 Originally, Trio Los Panchos are a trío romántico formed in New York City in 1944 by Alfredo Gil, Chucho Navarro, and Hernando Avilés. The trio became one of the leading exponents of the bolero and the romantic ballad in Latin America. Its original founding members have long since died and its current members are Chucho Navarro Jr., Eduardo Beristian and Misael Reyes.

Vicente Fernández Gómez was a Mexican singer, songwriter, actor, and film producer. Nicknamed "Chente", "El Charro de Huentitán", "El Ídolo de México", and "El Rey de la Música Ranchera", Fernández started his career as a busker, and went on to become a cultural icon, having recorded more than 100 albums and contributing to more than 30 films. His repertoire consisted of rancheras and other Mexican classics.

Latin pop is a pop music subgenre that is a fusion of US–style music production with Latin music genres from anywhere in Latin America and Spain. Originating in Spanish-speaking musicians, Latin pop may also be made by musicians in Portuguese and the various Romance Creole languages. Latin pop usually combines upbeat Latin music with American pop music. Latin pop is commonly associated with Spanish-language pop, rock, and dance music.

The winners of the Second Annual Latin Grammy Awards were announced during a press conference on Tuesday, October 30, 2001 at the Conga Room in Los Angeles, California. The conference, which was broadcast live on the internet, was hosted by Jimmy Smits and Paul Rodriguez. Alejandro Sanz was the big winner winning four awards including Album of the Year. Juanes won three awards including Best New Artist. 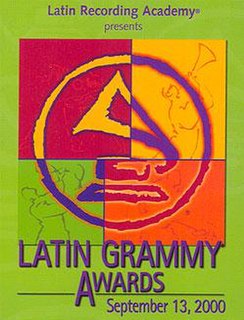 Historia de Un Ídolo, Vol. 1 is a compilation album released in 2000 by ranchero music performer Vicente Fernández. This album achieve a rare feat on the Billboard Top Latin Albums chart, it peaked at number-one in 2001 and 2007. As of October 2017, it is the best fifth bestselling Latin album in the United States. 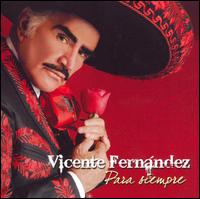 Para Siempre is the 79th studio album released by Mexican singer Vicente Fernández on September 18, 2007 by Sony BMG Norte. Written and produced by Joan Sebastian, and co-produced by Jesús Rincón, the album is a successful mariachi record. It has sold two million copies worldwide, and is one of the biggest-selling albums by Fernández. It spawned four singles: "Estos Celos", "La Derrota", "Un Millón de Primaveras" and the title track, the latter of which was used as the main theme to the Mexican telenovela Fuego En La Sangre, which brought the album wider exposure and helped it to stay in the charts for over two years. It was named the best-selling Regional Mexican Album of the decade by Billboard magazine.

Con un mismo corazón is the 13th studio album by Mexican pop singer Ana Gabriel. It was released on 1997. This material was produced by herself. Nine out of the 12 tracks were written by Gabriel herself, and these songs follow her typical way of lyrics about heartbreak and abandonment already established by composers like José Alfredo Jiménez. In fact, Gabriel covered one of Jimenez's songs with verve. The darkly toned "Me Equivoqué Contigo" shows the singer meeting the erroneous man at the altar of the church. It has the duet with the thunderous-voiced Vicente Fernández. Her delightfully raspy voice has never found a better companion. It was nominated for Regional/Mexican Album of the Year at the 10th Lo Nuestro Awards.

Lástima Que Sean Ajenas is the twenty-fifth studio album by Mexican-American singer-songwriter Pepe Aguilar by Equinoccio Records and distributed by Sony Music. It is a tribute album that consists of twelve cover versions of songs recorded by Mexican singer Vicente Fernández.

This article includes an overview of the major events and trends in Latin music in the 1980s, namely in Ibero-America. This includes recordings, festivals, award ceremonies, births and deaths of Latin music artists, and the advancement and adjournment of the genre from 1980 to 1989. 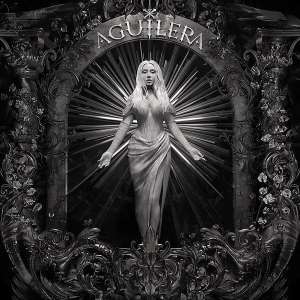 Aguilera is the ninth studio album by American singer-songwriter Christina Aguilera. It was released digitally through Sony Music Latin on May 31, 2022, as the follow up to her first Spanish-language album, Mi Reflejo (2000). As a trilogy album, Aguilera consists of three "chapters" with each being released as a separate extended play (EP): La Fuerza, La Tormenta and La Luz. Titled after her surname, the album pays tribute to Aguilera's Latin-American heritage, her Ecuadorian father, and her childhood and as a means to connect her children with their Latin heritage.

"La Reina" is a song recorded by American singer Christina Aguilera for her ninth studio and second Spanish-language album, Aguilera (2022). It was written by Aguilera, Luigi and Santiago Castillo, Servando Primera and Yasmil Marrufo, and it's production was handled by the latter, alongside Rafa Arcaute, Federico Vindver, Afo Verde as co-producer, and Jean Rodríguez as a vocal producer. "La Reina" was conceived in 2017, when Aguilera invited Primera to work with her on the album. The song was then recorded in 2021 and serves as the closing track on the album's first of three parts, La Fuerza, which was released as a separate extended play (EP).

This article includes an overview of the major events and trends in Latin music in the 1970s, namely in Ibero-America. This includes recordings, festivals, award ceremonies, births and deaths of Latin music artists, and the advancement and adjournment of the genre from 1970 to 1979.