Elizabeth Berridge (born May 2, 1962) is an American film and theatre actress. [1] She is best known for playing Charlotte, the maid in The Powers that Be and Constanze Mozart in the Academy Award-winning 1984 film Amadeus . She also played the role of Officer Eve Eggers on The John Larroquette Show (1993–1996), and has performed in the theater.

Berridge was born in New Rochelle, New York, the daughter of George Berridge, a lawyer, and Mary L. Berridge (née Robinson), a social worker. [2] The family settled in Larchmont, New York, where she attended Chatsworth Elementary School. There she began to perform and sing. Due to her acting commitments, she earned her diploma through an independent-study program at Mamaroneck High School. [3]

Berridge was called in to audition for the part of Constanze Mozart after filming had already commenced in Prague on Amadeus. Meg Tilly, who was originally given the role, injured her leg while playing in a soccer game and had to withdraw from the film. Two actresses were flown to Prague, and after a week's auditions Berridge was given the part (supposedly because the other actress, Diane Franklin, was "too pretty" to play the part of a landlady's daughter). [4] Berridge (and the other cast members) remained in Prague for six months to complete the filming. [5]

In 2001, Berridge married actor Kevin Corrigan, whom she met on the set of the independent film Broke Even. They have a daughter, Sadie Rose Corrigan. 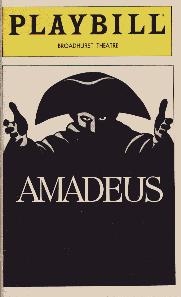 Amadeus is a play by Peter Shaffer which gives a fictional account of the lives of composers Wolfgang Amadeus Mozart and Antonio Salieri, first performed in 1979. It was inspired by Alexander Pushkin's short 1830 play Mozart and Salieri, which Nikolai Rimsky-Korsakov used in 1897 as the libretto for an opera of the same name. 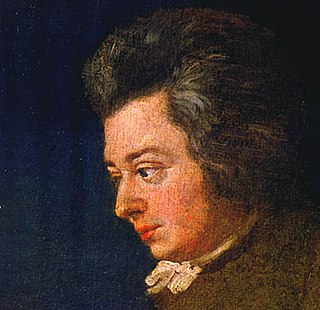 The Requiem in D minor, K. 626, is a requiem mass by Wolfgang Amadeus Mozart (1756–1791). Mozart composed part of the Requiem in Vienna in late 1791, but it was unfinished at his death on 5 December the same year. A completed version dated 1792 by Franz Xaver Süssmayr was delivered to Count Franz von Walsegg, who commissioned the piece for a requiem service to commemorate the anniversary of his wife's death on 14 February.

Meg Tilly is an American actress and novelist. 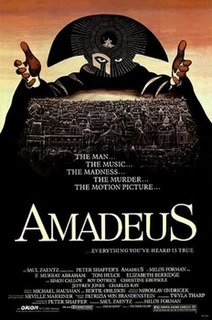 Amadeus is a 1984 American period biographical drama film directed by Miloš Forman and adapted by Peter Shaffer from his 1979 stage play Amadeus. The story is set in Vienna, Austria, during the latter half of the 18th century, and is a fictionalized story of Wolfgang Amadeus Mozart from the time he left Salzburg, described by its writer as "fantasia on the theme of Mozart and Salieri". Mozart's music is heard extensively in the soundtrack of the film. The film follows a fictional rivalry between Mozart and Italian composer Antonio Salieri at the court of Emperor Joseph II. The film stars Murray Abraham as Salieri and Tom Hulce as Mozart.

Maria Aloysia Antonia Weber Lange was a German soprano, remembered primarily for her association with the composer Wolfgang Amadeus Mozart. 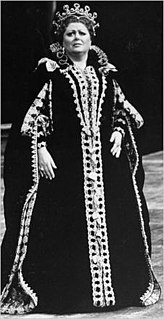 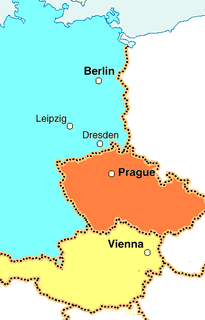 One of the longest adulthood journeys of Wolfgang Amadeus Mozart was a visit, beginning in Spring 1789, to a series of cities lying northward of his adopted home in Vienna: Prague, Leipzig, Dresden, and Berlin. 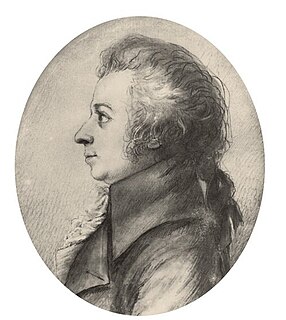 On 5 December 1791, the composer Wolfgang Amadeus Mozart died at his home in Vienna, Austria at the age of 35. The circumstances of his death have attracted much research and speculation.

Jahn's Hall was a concert hall in late 18th century Vienna. It was the property of a restaurateur/caterer named Ignaz Jahn, and seated "400 at the most". It is remembered as a performance venue for works by Wolfgang Amadeus Mozart and Ludwig van Beethoven.

Teresa Jo Ann Bernadette "Terry" Finn is an American actress best known for creating the role of Gussie Carnegie in the original Broadway cast of the Stephen Sondheim/Hal Prince/George Furth musical comedy Merrily We Roll Along and its Original Cast Album.

Maria Sophie Weber (1763–1846) was a singer of the 18th and 19th centuries. She was the younger sister of Wolfgang Amadeus Mozart's wife, Constanze, and is remembered primarily for the testimony she left concerning the life and death of her brother-in-law.

The composer Wolfgang Amadeus Mozart (1756–1791) led a life that was dramatic in many respects, including his career as a child prodigy, his struggles to achieve personal independence and establish a career, his brushes with financial disaster, and his death in the course of attempting to complete his Requiem. Authors of fictional works have found his life a compelling source of raw material. Such works have included novels, plays, operas, and films. 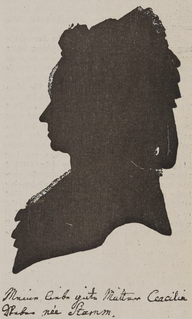 Cäcilia Cordula Stamm was the mother of Constanze Weber and the mother-in-law of Wolfgang Amadeus Mozart. 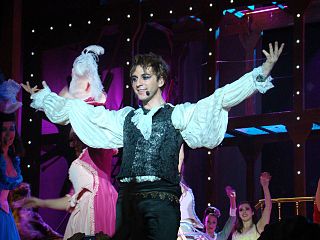 Mozart, l'opéra rock is a French musical with music by Dove Attia, Jean-Pierre Pilot, Olivier Schultheis, William Rousseau, Nicolas Luciani, Rodrigue Janois and François Castello, lyrics by Vincent Baguian and Patrice Guirao and a book by Attia and François Chouquet. The show is a dramatization of the life of Wolfgang Amadeus Mozart beginning from the age of 17 and culminating with his death in 1791 at the age of 35. It uses both original pop-rock compositions as well as pre-existing music composed by Mozart and other composers, including Antonio Salieri.

Saramae Endich was an American classical soprano who had an active performance career in concerts and operas during the 1950s and 1960s.

The Church of Saint Nicholas is a Baroque church in the Lesser Town of Prague. It was built between 1704-1755 on the site where formerly a Gothic church from the 13th century stood, which was also dedicated to Saint Nicholas. It has been described as the greatest example of Prague Baroque.

"Liebes Manndel, wo ist's Bandel?", otherwise known as "Das Bandel" is a terzet with string accompaniment composed by Wolfgang Amadeus Mozart, K. 441, with lyrics in the Viennese dialect. The vocal parts are designated as Constanze (soprano), Mozart (tenor) and Jacquin (bass).

Maria Magdalena Hofdemel née Pokorný was a Czech pianist, violinist, and student of Wolfgang Amadeus Mozart. She is primarily known for a speculative theory that she was connected to Mozart's death.