Elsa spent her childhood in Linköping in Sweden. From 1906 to 1908, she studied at Anna Sandström Teachers Training College (Anna Sandströms högre lärarinneseminarium) in Stockholm but returned to St. Petersburg in 1908. Her mother died in 1913. Elsa was in St. Petersburg at the outbreak of World War I and volunteered for a position as a nurse in the Imperial Russian Army. [1]

In 1915, Elsa Brändström went to Siberia together with her friend and nurse Ethel von Heidenstam (1881-1970) for the Swedish Red Cross, to introduce basic medical treatment for the German and Austrian POWs. Up to 80 percent of the POWs died of cold, hunger and diseases. As Elsa Brändström visited the first camp and witnessed the inhumane situation, she decided to dedicate her life to these soldiers. The men from Germany and Austria, so many close to death with Typhoid fever, looked upon the tall, blue-eyed, blond-haired nurse and benefactress and she became known as the "Angel of Siberia". [2] [3]

Back in St. Petersburg, she began the establishment of a Swedish Aid organisation. Her work was severely hindered by the outbreak of the October Revolution in the year 1917. In 1918, the Russian authorities withdrew her work permit, but she did not give up. Between 1919 and 1920, she made several trips to Siberia until she was arrested in Omsk and even condemned to death for spying, [4] later the sentence was revoked and Brändström was interned in 1920. After her release, she returned to Sweden (via Stettin with the ship MS Lisboa, where the German government gave her an official public reception) and organised fund-raising for the former POWs and their families. Afterwards she emigrated to Germany. [5]

In 1922 her book Bland krigsfångar i Ryssland och Sibirien was published. It was later translated and published as Among prisoners of war in Russia & Siberia (London: Hutchinson. 1929). From then onwards she looked after former POWs in a rehabilitation sanatorium for homecoming German soldiers at Marienborn-Schmeckwitz in Saxony. She bought a mill named "Schreibermühle" close to Lychen in Uckermark and used it as re-socialization centre for former POWs. Schreibermühle had extensive lands including fields, forest and meadows on which potatoes and other crops could be grown. This was most useful at that time because the German Mark was an unstable currency and lost value from day to day. [6]

In 1923, she undertook a six-month tour in the United States, giving lectures to raise money for a new home for children of deceased and traumatised German and Austrian POWs. On her trip she raised US$100,000 and traveled to 65 towns. At a stop at Gustavus Adolphus College in St. Peter, Minnesota, Brändström wore clothing of the Swedish Red Cross and "spoke about her thrilling experiences in Russia and Siberia during and after the war." [7]

In January 1924, she founded a children's home "Neusorge" in Mittweida which had room for more than 200 orphans and children in need. In Siberia she had promised many German soldiers, who were dying, that she would care for their children.

In 1929 she married her great love Heinrich Gottlob Robert Ulich, a German Professor of Pedagogy. Afterwards, she moved together with him to Dresden. In 1931, she sold the "Schreibermühle" and donated her other home, Neusorge, to the Welfare Centre in Leipzig. She founded the "Elsa-Brändström-Foundation-for Women" which awarded scholarships to children from Neusorge. On 3 January 1932, her daughter Brita was born in Dresden. In 1933, Robert Ulich accepted a lectureship at Harvard University and in consequence the family moved to the USA. Here Elsa gave aid to newly arrived German and Austrian refugees. In 1939, she opened the "Window-Shop", a restaurant which gave work opportunities for refugees in Cambridge, Massachusetts. [8]

At the end of World War II, she started to raise funds for starving and shelterless women and children in need in Germany through the organisations CARE International (Co-operative for American Relief in Europe) and CRALOG (Council of Relief Agencies Licensed for Operation in Germany). Sizable funds were collected from Americans and especially from German Americans, who accounted for >25% of the American population. [9] She undertook a final lecture tour in Europe on behalf of the "Save the Children Fund".

Elsa Brändström could not undertake her last planned journey to Germany because of illness. She died in 1948 of bone cancer in Cambridge, Massachusetts. While her daughter Brita stayed with her husband and children in the USA, her husband Robert returned to Germany where he died in 1977 at Stuttgart. [10] [11]

Because of her commitment to POWs, Elsa Brändström became famous as a "patron saint" for soldiers. In Germany and Austria, many streets, schools and institutions are named after her.

"The war has brought about many heroines in various nations, but in my opinion, never again someone, who is more worthy of being honoured than Elsa Brändström." – General Alfred Knox, British Military Attaché in Russia. [12]

Among countless medals, awards and honours, Brändström was awarded the Silber Badge of the German Empire (German : Silberplakette des Deutschen Reiches) and the Golden Seraphim Medal (Swedish : Serafimermedaljen). Elsa Brändström was also nominated for the Nobel Peace Prize "Heroine of Peace" five times: in 1922, twice in 1923, 1928 and 1929. [13]

In Memory of Elsa Brändström

A ceremony at Arne-Karlsson-Park in Vienna on 16 September 1965 preceded the official opening of the XXth International Conference of the Red Cross. In the presence of Austrian civilian and military authorities, members of the Swedish colony, leaders of the Austrian Red Cross and many conference delegates, a monument to Elsa Brändström was unveiled. This monument, by the sculptor Robert Ullmann, stands as a testimony of gratitude to the famous Swedish nurse's work for German-Austrian prisoners during the First World War. [14]

William I, of the House of Hohenzollern, was King of Prussia from 2 January 1861 and the first German Emperor from 18 January 1871 to his death, the first Head of State of a united Germany. He was de facto head of state from 1858 to 1861, serving as regent for his brother, Frederick William IV.

August Friedrich Ferdinand von Kotzebue was a German dramatist and writer who also worked as a consul in Russia and Germany.

SS-OberführerErnst Boepple was a Nazi official and SS officer, serving as deputy to Josef Bühler in occupied Poland during World War II and the Holocaust, who was executed for war crimes. 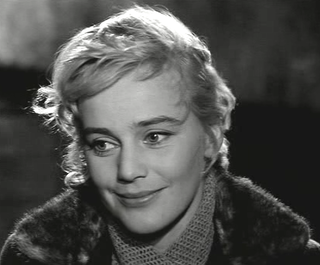 Maria Margarethe Anna Schell was an Austrian-Swiss actress. She ranged among the stars of German cinema in the 1950s and 1960s. In 1954, she was awarded the Cannes Best Actress Award for her performance in Helmut Käutner's war drama The Last Bridge, and in 1956, she won the Volpi Cup for Best Actress at the Venice Film Festival for Gervaise. 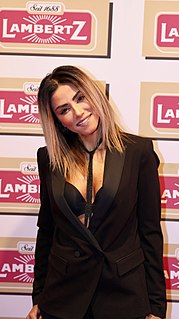 Sabrina Setlur, formerly known as Schwester S., is a German rapper, songwriter and occasional actress. Her debut was in 1995 under the guidance of 3p Records executive and mentor Moses Pelham, producer of her breakthrough single "Ja Klar." Following the drop of her pseudonym and a number-one single, "Du Liebst Mich Nicht," in 1997, a series of hit records established her position as Germany's "best known and highest-selling female rap act" to date.

Vasily Vasilievich Radlov or Friedrich Wilhelm Radloff was a German-born Russian founder of Turkology, a scientific study of Turkic peoples.

Gerhard Friedrich Müller was a historian and pioneer ethnologist.

Gertrud Bäumer was a German politician who actively participated in the German civil rights feminist movement. She was also a writer, and contributed to Friedrich Naumann's paper Die Hilfe. From 1898, Bäumer lived and worked together with the German feminist and politician Helene Lange. 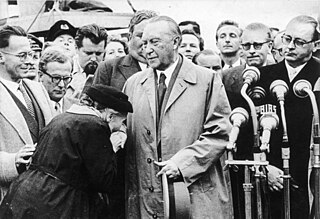 Approximately three million German prisoners of war were captured by the Soviet Union during World War II, most of them during the great advances of the Red Army in the last year of the war. The POWs were employed as forced labor in the Soviet wartime economy and post-war reconstruction. By 1950 almost all surviving POWs had been released, with the last prisoner returning from the USSR in 1956. According to Soviet records 381,067 German Wehrmacht POWs died in NKVD camps. German historian Rüdiger Overmans maintains that it seems entirely plausible, while not provable, that one million died in Soviet custody. He also believes that there were men who actually died as POWs amongst those listed as missing-in-action (MIA).

Erich Kern, was an Austrian journalist. He became a writer of revisionist books that sought to glorify the activities of the German soldiers during the Second World War.

Daniel Gottlieb Messerschmidt was a German physician, naturalist and geographer. He was born in Danzig and studied medicine in Jena and Halle, obtained his doctorate degree in the latter in 1713 and settled as a medical doctor in Danzig. In 1716, he came into contact with Russian emperor Peter the Great. By decree of November 5, 1718, Peter gave Messerschmidt the task to ”collect rarities and medicinal plants” from Siberia.

Margret Antonie Boveri was one of the best-known German journalists and writers of the post-World War II period.

Heinrich Sylvester Theodor Tiling was a German–Russian physician and naturalist. During his later years he became an American citizen.

Franziska Christiane Johanna Friederike "Fanny" Tarnow was a German author. She wrote under the names Fanny Tarnow and F.T. 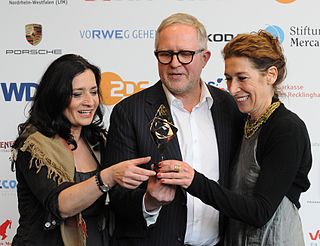 Sabine Derflinger is an Austrian film director, screenwriter, producer and dramaturgical consultant. She lives and works in Vienna and Berlin. Many of her films have won several awards, notably Geraubte Kindheit, Vollgas, Kleine Schwester, 42plus and Tag und Nacht. She is also well known for directing a number of films in the cult series Tatort.

Monika Kropshofer is a German painter and photographer. Since the middle of the year 2000 Kropshofer has gained renown through her large-format painted landscape and architecture photographs which were created as a result of her many work journeys and stays in Europe, Africa und Asia.

Zipser German is a Germanic dialect which developed in the Upper Zips region of what is now Slovakia among people who settled there from central Germany beginning in the 13th century. The Lower Zips was inhabited by other Central Germans who spoke a similar dialect called "Gründlerisch" which is considered to be the same language. Beginning in at least the 18th century, many Zipsers migrated to northern Romania, including to southern Bukovina, where several other Germanic dialects were also spoken. Over time, the speech of the Zipsers in Romania was heavily influenced by that of people from Upper Austria who settled among them and were ultimately assimilated into the Zipser ethnic community. During and after the Second World War, most Zipsers evacuated or were expelled to Germany, but a community of speakers remains in Hopgarten; their distinctive dialect is called "Outzäpsersch". 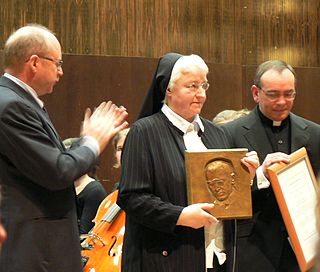 Maria Basina Kloos FBMVA is a German nun. She has served several terms as Superior general of the Waldbreitbacher Franciscan sisters between 1988 and 1994, and again between 2000 and 2012.